Eight oil and gas fields in the U.S. Gulf of Mexico (GOM) came online last year, four are slated to start up this year and two more ramp up in 2017, all signs that offshore output should hit record highs next year, the Energy Information Administration (EIA) said Thursday. 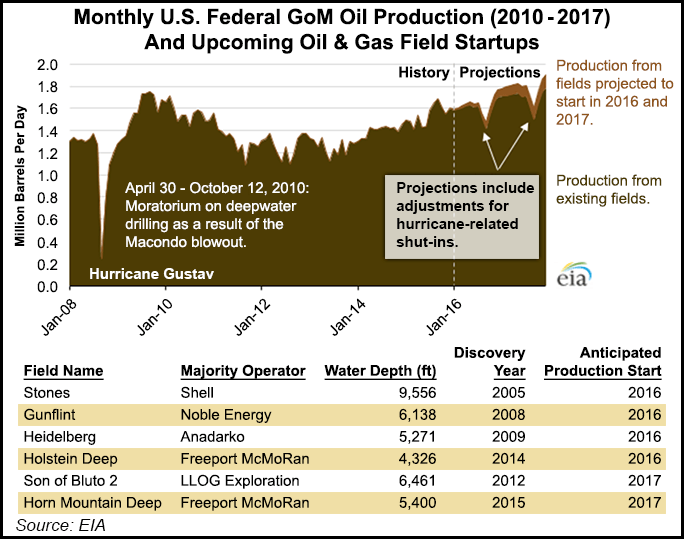 Federal prognosticators said GOM production should average 1.63 b/d this year, contributing 18% of total domestic crude production. Output is seen averaging 1.79 million b/d in 2017 and hitting 1.91 million b/d by the end of next year, when it would account for 21% of domestic production.

“Production in the GOM is less sensitive than onshore production in the Lower 48 states to short-term price movements,” EIA said. “However, decreasing profit margins and reduced expectations for a quick oil price recovery have prompted many GOM operators to pull back on future deepwater exploration spending, reduce their active rig fleet by scrapping and stacking older rigs, and restructure or delay drilling rig contracts.

“These changes added uncertainty to the timelines of many GOM projects, with those in the early stages of development at greatest risk of delay or cancellation.”

Because GOM projects require years of planning and millions in investment, the facility startups coming online have been in the works since long before commodity prices collapsed.

GOM momentum began in 2014, the first year production had increased in the province since 2009, according to Wood Mackenzie Ltd. In 2015, for the fifth year in a row, development capital spending in the region reached a record $14.9 billion (see Daily GPI, March 23, 2015).

Of the eight fields in the GOM that came online last year, seven were developed as subsea wells that tie back to nearby existing production facilities. Only Anadarko Petroleum Corp.’s Lucius field, in which ExxonMobil Corp. is project partner, is a truss spar.

“The use of subsea tiebacks allows producers to reduce both project costs and start-up times,” EIA noted. “The Lucius field produces oil using a type of floating production platform that supports drilling, production, and storage operations known as a truss spar. The Lucius spar is the largest in Anadarko’s fleet. It consists of a large, hollow, weighted cylinder supporting a deck and is connected to an anchor on the seabed through a mooring system. Its design provides increased stability in harsh offshore conditions.”

Of the four projects being readied for startup this year, the Anadarko-operated Heidelberg field — a twin spar to Lucius — began producing in January. Another project, Royal Dutch Shell plc’s Stones field development, which is the first floating production, storage and offload (FPSO) vessel in the GOM — is the only U.S. project on Shell’s short list (see Daily GPI,Feb. 4;Sept. 8, 2014). Stones, discovered in 2008, is in water depths of more than 9,550 feet.

“FPSOs allow the development of fields that are complex, that have unique reservoir properties, and that do not have existing infrastructure,” EIA noted. “Crude oil produced from the Stones field will be transported from the Stones FPSO using tankers to refineries along the U.S. Gulf Coast.”

The Houston independent plans to spend $250 million for its GOM program this year, Stover said.

“As we complete the Gunflint project, the vast majority of capital will be for exploration and appraisal activities. The lineup includes the Silvergate prospect, which is currently drilling, and an appraisal well for our 2014 Katmai oil discovery. Silvergate is a Miocene target with a resource range between 30 million and 100 million boe gross with nearby subsea tieback potential, and results are expected by the end of the first quarter.”

EIA said in 2017 two more GOM projects are scheduled to ramp up, both as subsea tiebacks.