Threats of recession in North America and across Europe are gathering force amid festering inflation and rapidly rising interest rates, developments that already tapered oil consumption and could impact commercial and industrial natural gas demand. 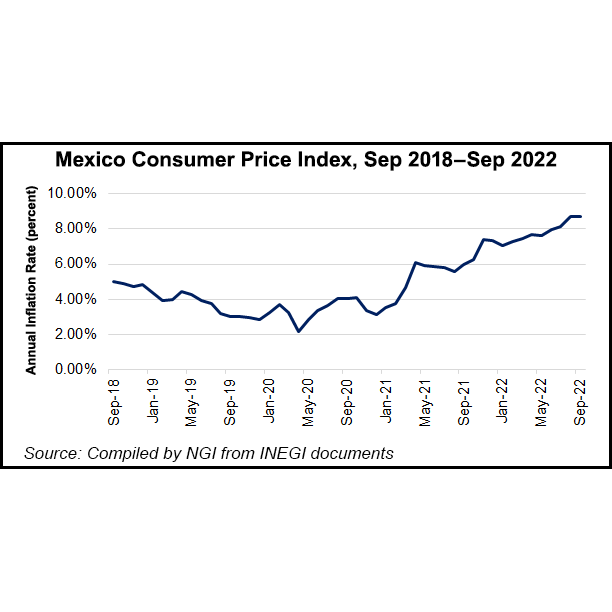 The latest indicator: The U.S. Labor Department on Friday reported the job market remains tight but hiring is slowing. Employers added 263,000 jobs in September. That was down from 315,000 in August and marked a second-consecutive monthly decline.

Major employers such as FedEx have announced hiring freezes and others, including Amazon, said they were slowing the growth of their workforces this fall to rein in spending and curb debt as borrowing costs surge following multiple Federal Reserve interest rate hikes. The Fed’s benchmark rate, near zero at the start of the year, now tops 3%.

The U.S. consumer price index hit a 40-year high this year, driven in large part by soaring energy costs, including a doubling of natural gas prices in 2022. Russia’s war in Ukraine and the Kremlin’s related pullback on gas deliveries to Europe – as well as Western sanctions against Russia — amplified already precarious supply levels on the continent. This bolstered demand for LNG from the United States and elsewhere, spurring price spikes across the globe.

Although the three-month moving average of Mexico’s industrial production index – which includes manufacturing, construction, oil and gas extraction, and utilities – ticked upward by 0.2% year/year in July, “Mexico’s manufacturing sector could experience a slowdown toward the end of the year, particularly if U.S. consumer demand decelerates as a result of high inflation and higher interest rates,” Cañas and Pranger said.

Consumer prices in Mexico rose 8.7% y/y in August, unchanged from July, according to figures published Friday by central bank Banxico and National Institute of Statistics and Geography INEGI.

How Will Energy Prices React?

Meanwhile, the United States banned imports of Russian oil, and the European Union is slated to follow suit in Europe, creating fresh price pressure on the crude front as well.

OPEC-plus members this month agreed to slash their collective crude production by 2 million b/d beginning in November. Citing global recessionary headwinds and potential threats to demand, it plans to maintain the reduced output through 2023.

Goldman Sachs analysts said Brent crude prices, hovering around $95/bbl on Friday, could ascend far above the $100 level and again approach the 2022 peak above $120 reached in June. The analysts raised their oil price forecast by $10/bbl to $110 for the last three months of the year and to $115 for the first quarter of 2023.

When prices reach new highs, consumers tend to pull back on consumption of fuels derived from oil, and businesses that use natural gas to power industrial operations often curb their calls for energy as well, analysts say.

“The darkening macroeconomic environment convinced OPEC-plus to act. A severe recession is likely in Europe, rising interest rates in the United States are denting the stock market and the housing market, and China’s zero-Covid policy is constraining oil demand,” said Ben Cahill, a senior fellow at the Center for Strategic and International Studies.

The cartel, he added, “has been frustrated that these downside economic risks are dominating sentiment, rather than indications that the market could tighten next year.”

The pessimism, by extension, can feed into slowing economic activity, hasten the onset of recession and further curb energy demand.

U.S. gross domestic product did shrink modestly in the first half of the year, he noted, and if another decline is reported for the third quarter, it could signal the onset of recession this year. That data is due in November.

“The ongoing risk is that inflation continues to disappoint and this requires interest rates to continue to rise to 5% or more,” Dowding said. There “is also a sense that the speed and scale of U.S. tightening this year will inevitably expose weakness in the financial system and there will be things that break as a result.”

Already, industrial demand for natural gas took hits in China amid pandemic-related economic sluggishness there, according to Rystad Energy. European countries are trying to taper commercial gas demand to ensure ample supplies for residential heating this winter, the firm added.

In the United States, oil demand has faded this fall. Total petroleum products supplied in September averaged 20.0 million b/d, down 4% from the same period last year, according to the Energy Information Administration (EIA).

U.S. natural gas consumption – and futures prices — also faded this fall, though this was due largely to waning weather-driven demand. Should winter conditions require large draws of gas from storage and reignite price pressure alongside continued rising borrowing costs and consumer prices, analysts say it would cause demand destruction in the commercial and industrial arenas, particularly if the economy is slowing as well.