After collecting a months-long deluge of popular disdain for the oil and gas industry in a public regulatory review, the Quebec government has decided to toughen its five-year-old moratorium against unconventional exploration using hydraulic fracturing (fracking) into a permanent ban. 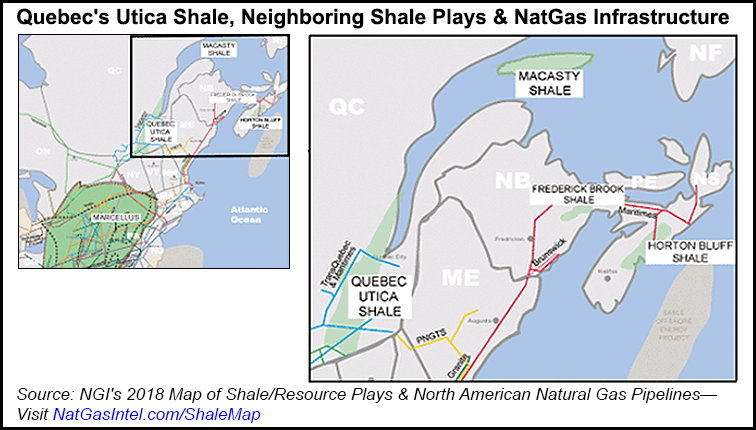 “From now on in Quebec, the exploration and exploitation of hydrocarbons is forbidden, unless it satisfies the most rigorous rules to protect our environment,” said Provincial Energy Minister Pierre Moreau.

The final version of the new regulations, to be published soon for a last formal review, includes outright prohibition against the use of fracturing to crack open unconventional deposits, effectively making Quebec’s share in the Utica Shale formation off limits.

In other geological features where the technology might be tolerated, the toughened Quebec regime further restricts fracturing by demanding that the operation take place at least 1,000 meters (3,090 feet) deep down in the province’s rock basement.

The new rules would also keep oil and gas operations out of urban areas and establish wide safety buffers where drilling is prohibited around public premises such as schools, hospitals and tourism or recreation facilities.

Moreau, acknowledging the anti-fracking forces aroused by the regulatory review, said in a statement “the history of the energy transition is being written,” referring to popular belief in decarbonization and electrification trends that would spell the end for oil and natural gas.

The new regulatory chapter immediately inflicted deep share price drops on the last company still proposing trials of shale fracturing in Quebec, Questerre Energy Corp. Questerre, which explores in Quebec’s Utica within the St. Lawrence Lowlands, earlier in 2017 said independent engineers estimated that some resources in the play were 30% larger than previously thought, an estimated 5.8 Tcf, or 965 million boe. Questerre has more than 735,000 gross acres that are prospective for the Utica.

The Calgary-based producer confirmed the fears of disappointed investors that “these regulations would have the effect of banning hydraulic fracturing and any meaningful exploitation of natural gas in Quebec.”

“Questerre condemns the decision by the Government of Quebec to capitulate to a vocal minority that are seeking to block the progress on our global environment and the growth of Quebec’s economy,” said Questerre President Michael Binnion. “This decision is motivated solely by short-term politics around the upcoming election,” which is scheduled this fall.

Questerre vowed to try again to revive Quebec shale drilling targets in the next round of legally required canvasses of public and interest group views before the new regulations can be implemented.

The drilling ban is the second recent step to exclude the oil and gas industry from Quebec. The provincial government halted a drilling program on remote, all but uninhabited Anticosti Island in the Gulf of St Lawrence before work could start and refunded the participants’ mineral rights lease payments.