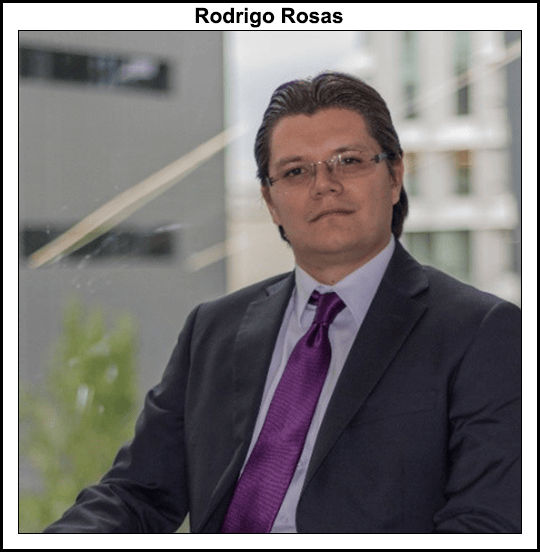 This 16th Q&A in the series is with Rodrigo Rosas, senior research and gas analyst at the energy research and consulting firm Wood Mackenzie in Mexico City, where he has worked since 2017. Prior to joining Wood Mackenzie, Rosas worked at the advisory firm Duff & Phelps as a senior associate and analyst, where he assisted state oil company PetrÃ³leos Mexicanos (Pemex) with valuation of performance-based service contracts and to design new contractual schemes following the Mexican energy reform.

Rosas has a bachelor’s degree in petroleum engineering from the Universidad Nacional AutÃ³noma de MÃ©xico, where he graduated with honors in 2014.

NGI: What are your thoughts on the renegotiations of the natural gas contracts between private companies and the ComisiÃ³n Federal de Electricidad (CFE) and the resolution of the conflict prior to the need for international arbitration?

Rosas: During the negotiation period between the CFE and the natural gas transportation companies, uncertainty grew, it generated doubts about the opening of the market and put the future of the contracts in question, not only for midstream companies but also for the contracts awarded during the upstream rounds.

One of the direct consequences on the national market was that the marine pipeline remained out of operation during the peak season, even though construction on the pipeline was completed around mid-June. As a result, CFE had to auction four cargoes of liquified natural gas (LNG) to be delivered to the Altamira terminal in August, which translated in increased marginal prices for natural gas. Because the fuel was more expensive, effects cascade down to generation costs which meant higher electricity rates.

Fortunately, the problem is behind us and a favorable resolution was reached between the parties. With an agreement now reached, we can expect the other six natural gas pipelines involved in the negotiations to accelerate construction and commission as quickly as possible.

NGI: How important is the marine pipeline for the supply of natural gas to Mexico and for the entire energy sector?

Rosas: Mexico’s generation matrix is mainly dominated by natural gas, and for that reason it is critical to have a continuous supply. This new natural gas pipeline is a key asset to secure a reliable supply of gas from south Texas and would also help to displace LNG imports.

This new pipeline will allow the combined-cycle plants located in Altamira, Tuxpan and the center of the country to have direct access to the cheapest natural gas in the world, which will likely mean an important reduction in generation costs and boost industrial development in these regions. Importantly, by injecting more U.S. gas further toward the center of the country, domestic production can hopefully remain closer to its origin and help the tight situation in the Yucatan peninsula.

NGI: How important is natural gas to the Mexican economy and what is your opinion on the development of the natural gas market in Mexico in recent years?

Rosas: Natural gas is key to economic development. Its price is highly competitive compared with other alternative energy sources, such as diesel or gasoline, which makes it very attractive. These qualities stimulate economic growth, increase efficiency and reduce costs in a large majority of industrial processes.

Regarding the Mexican market, its evolution continues. The market began to open 20 years ago when private midstream companies could transport natural gas. With the energy reform in 2013, private companies can produce and sell the molecule. As in every liberalized market, there are different challenges and objectives that should be accomplished to continue with a favorable evolution.

In Mexico, the social aspect is a fundamental and critical factor to consider for the market to continue its expansion and for gas to be able to reach new regions. When more than 50% of the national territory belongs to landowners and communities, their support will be required for any energy project to be successful. If communities continue to be left aside, delays, overcharges and social rejection will be a recurring topic.

NGI: Do you think natural gas imports from the U.S. to Mexico will continue to increase in the upcoming years?

Rosas: In the last 10 years, domestic gas production has declined, and that trend is going to be difficult to change in the short-term. There are technical and economic factors that pose important challenges to reverse the declining trend. Also, current efforts are focused on recovering oil production. Of the 22 new fields that Pemex announced that would enter operation in 2019, just a few, like Ixachi, will have an important amount of gas production, which makes an increase in natural gas output unlikely.

The shale revolution radically changed the U.S. market, pressuring prices to historic lows. The Mexican market has benefitted from this event and CFE was able to take advantage of the production boom and developed new natural gas pipelines that, even if currently delayed, will increase the import capacity from south and west Texas.

Gas demand in the country will continue to increase. Power along with the industrial sector will remain the engines of growth, which means that U.S. imports are going to be crucial to satisfy the market. Barely two years ago, U.S. imports recorded 4.5 Bcf/d during the peak season from June to September. According to the latest information published by the Energy Information Administration, in July this year U.S. exports reached a historic high of 5.3 Bcf/d, of which 84% come from south and west Texas. In the long term, Wood Mackenzie expects average export flows to Mexico to be around 8 Bcf/d by 2040.

NGI: What are the issues in the sector that Mexico needs to attend to and solve urgently?

Rosas: In the past, gas storage would have helped solve issues with supply. During 2011-2013, there were outages in domestic supply that seriously affected the market and national economy. At the same time, natural disasters can reduce import capacity, like hurricane Harvey in 2017 that had negative effects on the pipeline network infrastructure from south Texas consequently reducing flows to Mexico.

Last year, a new national policy was outlined for natural gas storage that proposed the development of 45 billion cubic feet. Mexico’s energy regulatory commission and the upstream regulator have chosen a depleted field in Veracruz to be the first underground storage asset. However, the auction is yet to happen. It was scheduled to take place in 2018.

NGI: What can Mexico do to produce more natural gas in the country and import less?

Rosas: To increase domestic production, specifically in the short-term, private producers and Pemex require help from the government to outline fiscal benefits and above all, incentivize exploration. However, with current market conditions, I think it is better to ask if the cost-benefit of increasing national production can be justified at this time.

The Mexican market is tied to southern U.S. dynamics. This has resulted in a price advantage for U.S. gas in the market. In the long-term, when prices begin to recover, Mexico must formulate a strategy that involves production of unconventional resources, deepwater areas, and non-associated gas that will be more attractive for producers, when gas production economics will be improved from what is currently available.