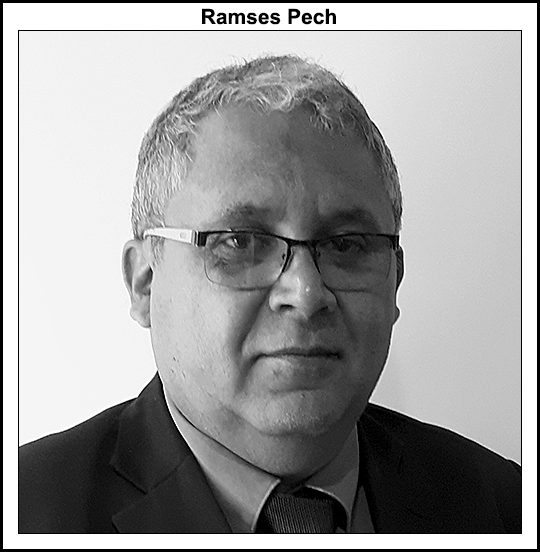 This eleventh Q&A in the series is with Ramses Pech, a veteran of the Mexican oil and gas industry with more than 25 years of experience. Pech began his career at Halliburton, where he worked for 17 years as an engineer and director in Mexico and Central America, specializing in directional drilling and well completion. He later worked as a manager of business development at Weatherford prior to moving into independent advising and consulting for government and private oil and gas companies. He is currently the CEO of Caraiva y Asociados, a consulting firm in Mexico City.

Pech earned a degree in Chemical Engineering from the Universidad Autónoma del Carmen. He holds an MBA in International Business Administration from the Tecnológico de Monterrey.

NGI: You recently made some public comments on the Pemex business plan. What are your thoughts on it?

There is a lot of money at stake given the reduction of profit-sharing fees. And, above all, the contracts they say they are going to give away assumes that 100 percent of them will be assigned. If they aren’t completely assigned, the cash flow they are anticipating won’t be there.

NGI: What about natural gas? How do you see it fitting into the business plan?

Pech: There are some plans and forecasts for natural gas. In some sections of the plan, the production of gas basins is included, such as the Burgos basin, Tampico-Misantla, the Gulf of Mexico regions. It also includes shale production of both oil and gas.

NGI: Speaking of natural gas imports and the CFE, one of the topics of the hour in Mexico is the recent announcement that the CFE and private companies are considering international arbitration to settle contractual differences regarding pipelines. What are your thoughts on the decision?

Pech: The first answer that I’m going to give you is that the CFE and its new administration are failing to understand how the business of the CFE works. That is my first thought.

What CFE needs to do currently is look ahead into the future at the possible interconnections to industrial plants or parks, or large companies that need natural gas for their processes. That would give them an advantage that could give them additional cash flow and an improved financial balance to improve natural gas sales.

NGI: So, in regard to the possibility of international arbitration, do you think the CFE has a case?

Pech: No. Not at all. I will tell you why. In the contracts, in the places where it talks about right-of-way, has to be taken care of by the CFE. The only thing that the companies do is construct the pipeline and take care of the operative tasks. The right-of-way is the responsibility of the state.

The construction of the pipelines took a long time and there are still some yet to be concluded. When they had the problems with local communities or the rights-of-way, it took a long time because they didn’t know what to do in terms of permitting. The companies that constructed the pipelines don’t have the responsibility to resolve those issues. As a result, the companies absorbed certain costs. They had to maintain the pipelines during the times they were stalled or blocked. There was a cost to do so.

CFE needs to recognize the costs that the companies absorbed and continue to pay the terms that were agreed upon. This needs to be done so that natural gas can enter Mexico throughout the life of the project. If some time has been lost, for example if the contract was for 20 years, they can extend them to 22 years.

NGI: Do you think the marine pipeline situation will be resolved any time soon?

Pech: I don’t know. But the start of the marine pipeline is needed as soon as possible. In recent weeks, it was announced that the pipeline was ready for operation. The problem now is that there are more costs being incurred and the natural gas isn’t being used. This just adds to the dispute and financial damage.

What happens is that the industrial growth plans for Mexico – from the west coast to the Yucatan peninsula – are affected. The marine pipeline originates in southern Texas, connects to Tuxpan, and then the Cempoala compressor. At Cempoala, the gas enters compression to be sent west and to the south of the country, which creates a lot of growth for the industrial sector.

The second thing is the finances that were earmarked for new investments will be on hold. A lot of them were contingent on the commencement of operations of the marine pipeline. If there’s no gas, these plans continue on hold and have nowhere to go.

Remember that the national pipeline system still lacks connection with the Mayakan pipeline. In the Yucatan peninsula, the generation of electricity in the CFE plants is only about 50% of the demand. The peninsula’s demand is about 2,000 MW, which is around the average that is needed for stable electricity, and currently those plants only produce 980 MW. More natural gas is needed to generate electricity in the region.

All the industries within the peninsula, such a hotels and tourism, are struggling due to the scarcity or natural gas. In certain parts of the day when demand is high, there are blackouts or operations have to be stalled because natural gas is insufficient to generate electricity as needed.

NGI: What are the broader implications of the pipeline conflict?

Pech: There are several inconvenient implications.

Number one: Projects and investment are delayed. Number two: Investments and investors feel uncertainty, which may lead to a change in investment plans. Number three: Economic development is suspended in these states where they were depending on the supply of natural gas to improve operations. Without the raw material, development stalls.

A problem in Mexico is that we still don’t understand the importance of natural gas. In the U.S., the consumption of coal is declining, which means less carbon dioxide emissions. There, the difference between burning natural gas and burning coal for electricity is understood.

In Mexico, we are yet to understand the benefit of natural gas. It is a raw material that is cheap, it produces less carbon dioxide and it is easier to transport. The only thing we are lacking here in Mexico is to properly invest in the infrastructure needed – pipelines – to transport it.

What is the benefit to more infrastructure for natural gas? The faster the raw material is delivered to a destination that currently doesn’t have pipelines, economic development can flourish. You can create industrial parks and reduce the costs of electricity generation, both for industrial operations, as well as residential. The electricity is also generated closer to where it is distributed, which lowers transportation costs.

Moreover, in Mexico we are confused about the energy reform. People are saying that it is going to be canceled and that there was corruption in the hydrocarbons industry, among other things. But the energy reform wasn’t just about hydrocarbons. It also includes the electricity market and infrastructure projects. The reality is that, although the production of hydrocarbons got the most attention for the expected revenues it would bring in, the most important element of it was the generation of electricity. Almost all of the economic activities in the country depend on electricity, and if that is offered at a cheaper rate, it’s a benefit for everyone. With more natural gas available, electricity rates fall.

NGI: Do you think that the CFE will continue to construct more natural gas pipelines? What is your forecast for what CFE will do during this administration?

Pech: There aren’t plans for many new pipelines. The company is going to have to maintain the pipelines that they currently have and finish the ones that are incomplete, if that is what they decide to do.

What I think should happen is that [pipeline operator] Cenagas should be the party responsible for overseeing pipeline construction and financial dealings with private companies. Cenagas now has its own budget and, to me, it makes sense that Cenagas is given the responsibility to hold new pipeline auctions. It is a state-owned agency. To avoid CFE disputes similar to those that we are currently seeing and to avoid conflicts of interest, Cenagas should assume a more prominent role. This would put less responsibility on the CFE.

A total separation is needed between CFE and Cenagas to divide the current responsibilities that are almost entirely on the shoulders of the CFE.

NGI: A lot of people in the sector are talking about giving more responsibility to Cenagas. Do you think it is feasible or possible that Cenagas will take possession of CFE’s pipelines?

NGI: There have been a lot of changes in the regulatory bodies thus far under the new administration. What impact does it have on the industry to see so many members of these regulatory bodies, such as the CRE, CNH or Cenagas, leave their roles in a short period of time?

Pech: We saw the Commissioner of the regulator CRE leave his post in June, though last month the CRE issued more than 300 permits to companies for things like energy generation.

So, maybe there won’t be as many problems as anticipated. The important thing is that the regulatory bodies and their leadership aren’t chosen solely based on political involvement or interests.

The Energy and Environmental Security Agency, ASEA, is another regulatory agency that is important and mentioned less. It is important that ASEA act as an autonomous agency to properly regulate the industry.

NGI: Do you think, during the next few years, that Mexico will have to continue to increase natural gas imports from the U.S.?

Pech: Yes, definitely. If Mexico doesn’t reactivate exploration activity in unconventional or shale basins, imports will continue to increase. We have some of the most prolific shale oil and gas basins in the world, though if we refuse to produce their contents, dependence on the U.S. for natural gas will just keep growing.