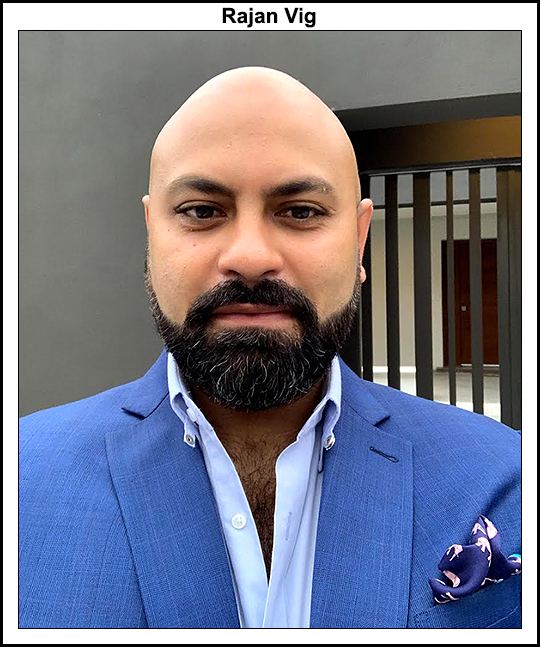 This 40th Q&A in the series is with Rajan Vig, founder of Indimex Group, a Mexico City-headquartered oil and liquid gas marketing and trading company with offices in the United States. Indimex, which Vig started in 2019, is focused on the procurement, marketing, trading and optimizing of refined products and liquified gases into Mexico and other regions of Latin America as well as investing and operating physical assets in Mexico and the United States.

Currently, Vig is the chief consultant to Mexico for the Western Power Trading Forum within the power and gas space and sits on the Committee Board for ACE and ISME. He additionally writes articles on Mexico for energy publications.

Vig previously worked in energy private equity and strategy in London before moving to Houston to start an energy strategy consulting practice. In 2016, he moved to Mexico City to set up BioUrja’s Mexico business for gas, power and fuels trading at the start of the energy reform.

NGI: Do you see the Mexican energy market slowly starting to pick up again as the country attempts to return to some state of normalcy following those first few difficult months of Covid and shutdowns?

Vig: This month (September) has been our best month since March. It’s indicative of the fact that there is more population mobility and that people are starting to return to offices. And, as the markets open up, people feel more comfortable moving around and, as a result, demand has increased, which is why this month has been our best one since the start of the year.

NGI: Following the energy reform in 2014, Mexico sort of became a darling of the international energy world and was thought of as a place with considerable growth potential. Currently, is Mexico still seen as an attractive investment opportunity in comparison to a few years ago?

Vig: Absolutely. I think there is a tendency to see Mexico currently as a more risky investment, probably due to the ambiguous nature of how the current administration wishes to maneuver itself across a number of different industries, and that’s not just specific to the energy sector. The fundamentals regarding Mexico, however, remain, and there’s very little a political dogma or ideology can do to change that. Mexico remains the 11th largest economy in the world in terms of purchasing power parity. It has the 10th largest population in the world.

From an energy standpoint, if you look at the numbers, Mexico imports over 65% of its refined products and approximately 90% of its natural gas consumption, and the market and population continue to grow. Certainly, there is a growth tendency here in Mexico, and the reason why they import the amount of product that they do is because they simply don’t have the local infrastructure and they haven’t explored the potential oil and gas reserves here in the country.

The market remains huge for individuals who are coming and looking at developing energy supply chain infrastructure and consolidating that market here in Mexico. It’s a simple case of supply and demand.

NGI: Do you think the current Mexico energy model, which includes importing record amounts of natural gas from the U.S., is sustainable, or should the country look to produce more of its own natural gas?

Vig: The primary question with regards to that particular question is: When will we reach peak natural gas demand globally? Most indicators suggest that that will happen between 2030 and 2035, so we’re probably around a decade away from the initial peak.

One of the key focuses for this administration and the Morena party has been to strengthen the state-owned enterprises, Petróleos Mexicanos (Pemex) and Comisión Federal de Electricidad (CFE). One action that should be properly analyzed is a cost-benefit analysis when discussing Mexican and national natural gas production. The U.S. states that border Mexico to the north are so efficient that they are producing some of the cheapest and freest flowing oil and gas globally.

From one standpoint, Mexico is incredibly fortunate to have access to this molecule. It’s an obvious natural choice for these gas producers in the United States to be selling into Mexico.

The second part of your question relates more to energy security. If you think about Europe, for example, Russia has a hold on Europe for its natural gas flow.

In South America, you only have to look to Argentina in the past couple of decades. Back in 2004, after they went through their third recession in 10 years in 2002, the economy started rising and production failed to match demand. The country was left exposed and the only real opportunity in the Southern Cone was to look up north to Bolivia, where there was an abundance of natural gas, though no viable way to bring it in because the infrastructure wasn’t in place.

Mexico doesn’t have that problem importing from the U.S. because pipeline capacity continues to increase, even though it isn’t perfect. There is a risk that these opportunities could close in the medium to long term. So, if Mexico’s demand for natural gas is likely to increase over the next 10 to 15 years, it’s still viable for the country to explore some of these gas reserves that are here.

NGI: Are there any particular projects that you think Mexico should develop to improve efficiency and accelerate development in the energy market?

Vig: Currently, the president’s party Morena is developing its energy infrastructure plan and is looking at over 200 public-private partnerships with private investors. In mid-September, they said that the plan, which has already been delayed, is expected to be announced in October. They’re looking at approximately 200 energy projects across electricity, gas and fuels. I’ve seen a bunch of really exciting projects. I think the energy infrastructure plan is key for us to understand how the current administration wishes to work with private developers, both on a national scale and internationally, to allow those projects to come to fruition over the next four years they’re in government.

NGI: If you’re an international company and you see projects canceled or terms modified – such as with private natural gas contracts last year — does that concern you when looking to develop a new project in Mexico?

Vig: Not really. As I mentioned before, the energy infrastructure plan that we’re waiting to see and explore is going to be integral for us understanding how Morena intends to work with private developers.

If you’re talking about modifications under new governance, that’s always occurred both in Mexico and internationally. Any international company that is looking to develop a particular market in a particular country will have the appropriate legal advice in place to counter any of those adjustments. Additionally, there are mechanisms within their contracts that, if the government does behave in a way that might not be considered as legally viable, the Supreme Court is called upon to intervene, which it has on a number of occasions already here in Mexico with regards to gas and electricity over the past year.

So, there is a strong legal framework in Mexico – probably one of the strongest in Latin America — and I think that’s a safety net that international investors appreciate.

NGI: In your opinion, what are some of the most pressing challenges right now in the Mexican energy industry, both for private and national companies?

Vig: From my standpoint, it’s dialogue. I think the current government has been worried that Mexico was selling itself to foreign companies who would come in and take advantage of its vast array of commodities. Unfortunately, bad eggs exist everywhere, and that was never a Mexico-specific phenomenon. So, I would hope that the government gives private companies — both national and international, and small and medium sized businesses – the opportunity to communicate directly with the government, and to do so more often. That’s been one of the biggest struggles for many companies over the last couple of years.

I believe I speak on behalf of the majority of my peers when I say that we’re here because we generally have an interest in bettering the energy supply chain and the energy sector here in Mexico. We’re honored to be part of one of the largest energy reforms undertaken by a nation and we think that, if the private sector and government work together, that together we’re stronger for it. And I think that’s the message that we really need to send to the government, and we’re trying to, but that comes down to having the opportunity for dialogue and communication, which is something that has not been that easy.

So, I think dialogue is key, and with more of it, there would be more security and confidence in investment in the energy industry. I think that’s the one area where I feel this government can improve to create more opportunities for industry participants.