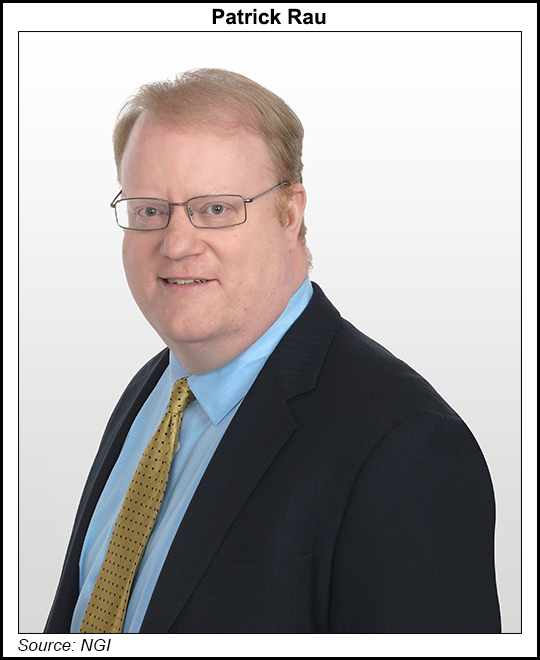 This 39th Q&A in the series is with Patrick Rau, CFA. Rau is Director, Strategy & Research and Price Editor for Natural Gas Intelligence, and oversees the process for calculating and publishing the natural gas spot market prices that appear in NGI’s various Gas Price Index newsletters. He also created NGI’s daily Mexico Gas Price Index publication, which debuted in June 2017, along with NGI’s LNG Insight service that began last October. Overall, he has more than 20 years of experience in the energy industry, including time spent as both a sell-side and buy-side natural gas analyst on Wall Street, and as a financial analyst for the Amerada Hess Corporation. Rau holds a B.A. in Economics from the College of William & Mary, an M.B.A. in Finance from Georgetown University, and is a Chartered Financial Analyst.

NGI: We’ve just finished the first virtual version of the Mexico Gas Summit which is an event we’ve been attending at NGI for many years now. What were some of the main takeaways for you?

Rau: My two main takeaways from the conference are the U.S. will continue to be an important source for satisfying Mexico’s need for natural gas, and Mexico is inching closer toward being able to support its own natural gas spot market indexes.

Natural gas currently accounts for more than half of Mexico’s electricity generation, and while renewables will eventually take a larger share of that mix, I think natural gas will remain the marginal generating fuel for Mexico for at least the next decade.

There is talk about Mexico increasing its domestic natural gas production by roughly 50% over the next five years or so, but I think a number of very big ifs have to happen to achieve that. One is PEMEX must maintain its investment grade rating, and there is no guarantee that will happen. Two is the country needs more investment from private producers, but since AMLO has stopped the tender rounds, that is less likely to happen.

However, the big obstacle to me is the country will need to embrace fracking and unconventional production, since it will be difficult for Mexico to achieve a significant increase in natural gas production via associated gas from its conventional oil wells, especially if PEMEX loses its investment grade. The benchmark for Mexico will be whether it can achieve the same kind of production scale that is happening north of the border in places like the Permian and Eagle Ford, and that will be a very tall order indeed.

This also of course assumes the energy reform remains intact after the midterm elections in Mexico next year. If that were to be written out of the Mexican constitution, then I think even the most optimistic natural gas production plans in Mexico will be just that, and that would require more U.S. sourced gas.

Also, if some of the proposed Mexico LNG export facilities are built, that will be an even bigger call on U.S. gas going forward.

Bottom line, there is a wide range of outcomes for how much domestic natural gas production will grow in Mexico, but it’s hard to see a scenario where imports from the U.S. will decline dramatically over the next decade.

As far as Mexican spot market indexes go, I was encouraged to hear Ron Vogel from BP state that Mexico is “on the cusp” of being able to support its own indexes, and our latest NGI survey of the Mexican market shows that more companies are buying gas in the daily market and from suppliers other than Pemex & CFE. So things are certainly moving in the right direction there. The next step is getting Mexican gas buyers and sellers to feel comfortable contributing trade data to price reporting agencies (PRAs) like NGI.

NGI: NGI was there during the deregulation of the US market and helped advance the formation of a modern, liquid and transparent gas market. What are some of the lessons the Mexico gas market can take from the US experience?

Rau: The faster those indexes develop, the better, because good price signals are vital to the advancement of any industry. U.S. natural gas prices deregulated in 1978, and good liquid price indexes started to develop by the middle-to-latter part of the next decade. Mexico isn’t too far off that timeline, actually, considering market reform in Mexico really began in 2013.

CRE can also follow the U.S. Federal Energy Regulatory Commission’s (FERC) lead with respect to its Safe Harbor Policy statement that was issued in 2003 I believe, which provides guidelines to help ensure there are no irregularities in the price reporting process that may otherwise adversely skew the resulting price signals. That is crucial.

NGI: Why is price reporting and the formation of an index so important to the development of the Mexican gas market?

This is kind of a cliched answer, but it’s one straight out of economics textbooks. Better pricing signals simply help markets to develop, and to do so more efficiently. Right now, a great majority of gas in Mexico is bought and sold as a differential to U.S. indexes, since U.S. indexes are more established and are very liquid. But those U.S. indexes don’t necessarily reflect the supply/demand fundamentals of various locations in Mexico, especially the farther away you move from the U.S./Mexico border. Mexican indexes based mostly on Mexican fundamentals would provide a much better domestic market signal, in my view.

Another benefit of indexes is they help support risk management tools, such as basis swaps and forward curves. Imagine being able to hedge forward price exposure directly at a place like Guadalajara or in the Bajio region. Derivative instruments need a clearly defined physical market spot index as the underlying physical benchmark in order to allow that.

Initially, gas buyers would stand to benefit the most, since market transparency is still lacking in Mexico. Market makers may not like them as much initially, since that would impact their margins in the short-term. But if indexes bring in many more market players, those market makers could make up for lower spreads with more volume.

NGI: If an end user, marketer or producer wanted to be a part of this price formation in Mexico, what should they do? Why would it behoove them to do so?

Rau: Once again, good pricing signals are the key to any growing industry and to overall economic development.

The first step for contributing prices to us is to become familiar and comfortable with the process, and the key here is to know that we keep all price and trade data contributed to us confidential.

Contributing data is easy. All you have to do is e-mail your trades to us each trading day, and that’s something most market participants in Mexico are doing to the CRE anyway. We accept data in lots of different formats, but most companies in the U.S. and Canada just send us an Excel spreadsheet with their deals. But we are open to receiving data however it is most convenient for our contributors.

We’d love to talk people through the process, and I’d encourage anyone interested to reach out to me, even if you aren’t quite ready or able to report. Liquidity should continue to grow in the Mexican gas market, so we’d love to get the conversation going now.

NGI: What are some of the trends that have emerged as a result of the coronavirus in terms of exports to Mexico and natural gas pricing?

Rau: Gas exports to Mexico don’t seem to have been impacted all that much by the virus. In fact, since the Wahalajara system came on line in full a few months ago, exports to Mexico from the U.S. have consistently topped more than 6 Bcf/d, the first time that’s ever happened. It doesn’t hurt that the summer is the peak consumption time in Mexico, but that is certainly encouraging.

NGI: Give us a brief glimpse into where you see Mexico gas prices headed in the next 12-18 months.

Until Mexico develops natural gas indexes of its own, gas will continue to be priced off U.S. indexes, and the two most important U.S. indexes with respect to Mexico are Waha and the Houston Ship Channel.

Gas production in West Texas is almost entirely the output of associated gas production, so a spike in crude oil production could cause Waha prices to decline. But as of today, according to NGI’s Forward Look curves, the average Waha basis differential to the Henry Hub for the next twelve months is minus 43 cents (per MMbtu), but that improves to minus 28 cents for the 12 months starting in October 2021. Two new natural gas pipelines out of the Permian that are expected to come on-line next year is a big reason for that improvement.