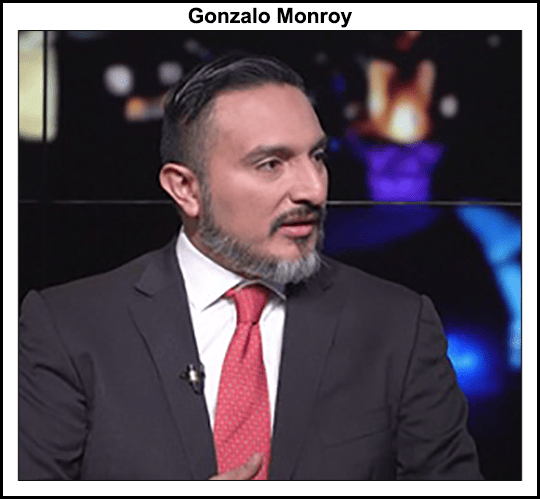 This sixth Q&A in the series is with Gonzalo Monroy, an expert and consultant with more than 16 years of experience in the Mexican energy industry. Monroy is the managing director of GMEC, an energy consultancy he founded in 2012 that specializes in energy regulation, legislation, logistics, project development and economic and risk analysis.

Prior to GMEC, Monroy worked as the strategic planning deputy director at the Mexican Energy Ministry, where he oversaw the development and technological plan developed by PetrÃ³leos Mexicanos (Pemex) for the Chicontepec field. He also worked as a consultant at IPD Latin America from 2003-2008. Monroy holds a degree in economics from the Instituto TecnolÃ³gico AutÃ³nomo de MÃ©xico, known as ITAM.

NGI: How do you think the new free market is developing in the natural gas sector in Mexico?

Monroy: One thing to keep in mind when talking about the natural gas market in Mexico is how it has developed over the last 20 years. First, it was a market dominated and, yes, manipulated by the Pemex gas subsidiary, PGPB, which had a dual role of being the main natural gas transporter as well as the largest natural gas marketer. Despite regulations and several efforts by the CRE, the energy regulator in Mexico, the market developed despite Pemex. However, the big change occurred when [state power company] ComisiÃ³n Federal de Electricidad (CFE) took a more expanded approach to its mandate to guarantee electricity supply in Mexico.

The industrial base continues to be reluctant to sign long-term contracts as they prefer to use their political leverage with the government to extract favorable terms with CFE and/or Pemex.

NGI: What do you think could be done to improve the development of the natural gas industry in Mexico?

Monroy: From a macro perspective, more clarity and definition of how the Mexican government sees the natural gas market would help reduce a lot of uncertainty, especially regarding infrastructure projects. The veiled threat of controlled prices and interference, either from the federal government or through actions from the state-owned companies have stalled several infrastructure projects. Certainly, the whole rhetoric pushed by President AndrÃ©s Manuel LÃ³pez Obrador and the director of the CFE, Manuel Bartlett, about corruption regarding pipelines have shaped this perception.

On a lower level, more depth is needed in the natural gas market to survive, develop and prosper. We need more of everything: production, producers, importers, marketers, transporters, LDCs, consumers, infrastructure. Storage is urgently needed. Also, I would bring to attention the initiative in the Mexican Stock Exchange to introduce a natural gas futures market, which would bring more liquidity into the market.

A more defined, transparent mandate in [pipeline system operator] Cenagas would make a difference, too.

NGI: Is it difficult for independent companies to buy and sell natural gas in Mexico currently given the current market dominance of Pemex and CFE?

Monroy: It’s a matter of perspective. Most of the marketers, especially those in the U.S., are comfortable dealing only with Pemex and CFE, due to the volumes involved. In their view, the effort to aggregate volume from Mexican consumers is just not worth it, especially when Pemex and CFE have reserved all the capacity in all the interconnection points. This is not to say that the U.S. marketers are not interested in the Mexican market. They just wish there were other parties to do the hard work of aggregating volume and then dealing with CFE or Pemex. That would require some deep pockets and a lot of political leverage over the two state-owned utilities.

NGI: What kinds of companies in Mexico are buying natural gas from the independents?

Monroy: As explained before, most of the industrial base is comfortable dealing with Pemex and/or CFE. One hidden aspect of the Mexican energy reform is that Mexican consumers were not sophisticated enough to capture business opportunities in the new market. In some cases, they are still only willing to sign bundled, single-price, contracts with Pemex so they don’t have to deal with the inconvenience of managing their nomination and consumption.

NGI: Do you know how much of the natural gas that’s being sold in Mexico is not originated by the state-run entities? Is that percentage growing?

Monroy: As of 2017, about 8% of the demand is from entities other than Pemex and CFE. Most of that demand is coming from the petrochemical complexes in Altamira.

Monroy: Actually, most of Pemex’s clients are happy to deal with bundled, all-included, contracts. It is my understanding that some local distribution companies were considering the revised FHS formula, but I am not sure it has materialized in a revised contract with Pemex.

NGI: What are the top trading locations for natural gas in Mexico? Do you see any major hubs emerging at any point?

Monroy: I think there are three, Monterrey, Cempoala and Chihuahua, that are already emerging with one having all the potential to become a fourth, and that is Guadalajara. The Guadalajara option could happen if there is a reliable supply to and from the Manzanillo liquified natural gas (LNG) terminal.

NGI: Lately we’ve seen blackouts in the Yucatan. Is there a real threat of natural gas shortages to industry right now? What areas of the country are at most risk of blackouts in the next few months?

Monroy: The Yucatan Peninsula has an immediate threat of shortages. Domestic production from Pemex continues to fall, and it uses much of the natural gas produced for pneumatic pumping in the oil-producing fields.

The cancellation of the floating storage and regasification unit in Pajaritos is a serious blow in terms of security of supply. All hopes are on the development of the Ixachi field which is 95% natural gas, 5% light oil, but it is likely that this gas will flow to Guadalajara, not the Yucatan Peninsula.

There are other points of concern, such as in Veracruz and Saltillo, where transmission is insufficient and generation inadequate.

NGI: Do you see any interest in establishing an LNG export facility in Mexico at any point?

Monroy: Yes. It makes sense economically, logistically, also in terms of energy security strategy. Mexico has the huge blessing of being adjacent to the cheapest natural gas on the planet. With the development of more infrastructure, Mexico could be flooded with imported gas, mainly from the Permian. Once domestic demand is covered, Mexico makes the most sense to reconvert existing regasification LNG plants to go after the coveted Asian market

NGI: If someone does build an LNG liquefaction facility in Mexico, be it the current Sempra Energy Costa Azul proposal or another project, what needs to be done from an infrastructure standpoint to accommodate that?

Monroy: It all depends on where the conversion takes place. Both Costa Azul and Manzanillo already have the port infrastructure. Manzanillo has the edge, as it can include a second jetty, therefore expanding export capacity. I put these two projects as the favorites as there are no other ports in Mexico with the depth to take Qmax-like LNG vessels. Given the distance between Mexico and Asian markets, it would have to be the largest vessels available to reduce transportation costs.

Monroy: As of today, I think policy is the biggest risk. The new administration, led by LÃ³pez Obrador, has clearly signaled that the energy sector will be developed through Pemex and CFE. As such, the interloping area is natural gas. The new CFE director has stated that he does not like natural gas, and that Pemex should be in charge of it. Also, politically-driven interference in Cenagas could potentially stop future development.

The second largest challenge is how can Mexico develop its natural gas fields economically, given that U.S. prices are so cheap and even going into the negative as we saw at Waha a few weeks ago.