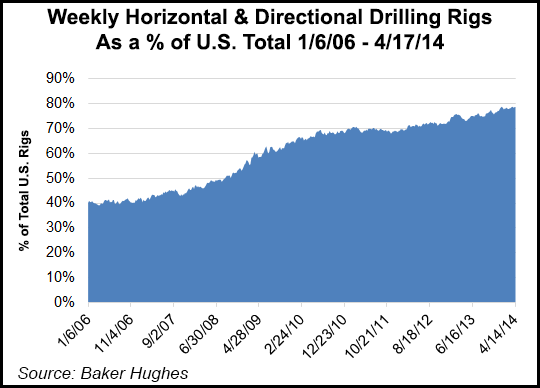 PTEN’s Apex rigs, a specialized walker, continue to be in high demand, Hendricks said. PTEN began to build its Apex rig in the mid-2000s. The high-spec rigs literally are flying off the shelf.

“We expect to complete 20 rigs in 2014 and all either have signed contracts, or are committed and awaiting signature by customers. We will continue to build rigs to meet customer demand.

“Given the recent surge in demand for high-spec Apex rigs, we have increased the number of rigs in our construction program by adding six rigs. We now expect to complete 23 rigs through the four quarters ending March 2015.

Appalachian operations particularly were impacted by the unusually severe weather during the latest period, but “nonetheless, revenues increased sequentially to $240 million…from $234 million in the fourth quarter,” Hendricks said. “Our gross margin decreased sequentially to 16.8% of revenues as a result of having crews and equipment on location that were unable to provide revenue generating services during the unusually severe weather.

“While on location, we continued to incur labor, demurrage and other costs, including fuel costs to run our equipment in order to protect it in these extraordinary weather conditions.”

Since the horizontal rig count in the United States bottomed in July 2013, it has “increased by more than 150 rigs, leaving high-spec rigs in short supply across the industry,” said Chairman Mark Siegel. “Having transformed the company, we are well positioned to benefit from the strong demand for our growing fleet of high-spec rigs. During the first quarter, our fleet of Apex rigs achieved better than 97% utilization.

“The increase in horizontal drilling activity and fracture intensity is increasing demand for pressure pumping. While the pressure pumping industry continues to be oversupplied, we believe the incremental demand is moving the industry toward equilibrium.

“Within our fleet, we expect activity will recover in the Northeast, as weather in the second quarter is expected to be more accommodating. Additionally, in the Southwest, activity is expected to remain strong due to increasing horizontal activity in the Permian.”

Commodity oil and gas prices “remain favorable for increasing activity levels, and we remain positive about the outlook for both contract drilling and pressure pumping,” said the chairman. “We believe that with the short supply of high-spec rigs, the industry is at the point where in previous cycles dayrates accelerated.”

One major reason for the shift to more high spec rigs is simply that more and more wells in the United States are being drilled horizontally, and those wells tend to require more horsepower and drilling capabilities, everything else being equal. Horizontal and directional focused rigs have grown from 40% of total active drilling rigs at the beginning of 2006 to nearly 80% today.