A $400 million crude oil storage and blending complex proposed for St. Landry Parish in Louisiana would expand market opportunities for production coming from liquids-rich shale plays while providing refiners and petrochemical plant operators with a better-tailored barrel to meet their needs, backers said. 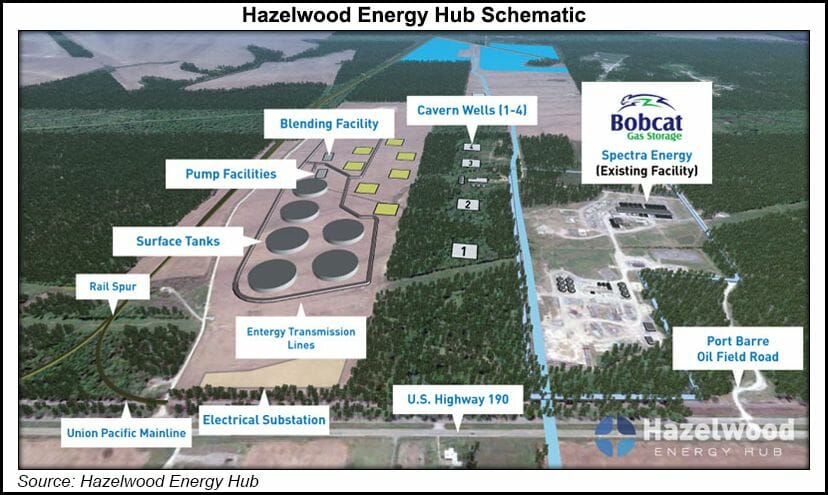 For refiners, the project is significant because it would allow them to receive more optimal crude blends derived from domestic crude oil, which is lighter than the heavier, sour foreign imports for which the facilities were designed, Bruce Bernard, a partner in project backer Stone Bridge Energy Partners LLC, told NGI’s Shale Daily. Better tailoring crude to meet existing refinery requirements could eliminate the need for billions of dollars worth of refinery upgrades and conversions, Bernard said.

For producers, particularly in the nearby Eagle Ford Shale, the expanded Gulf Coast blending capability to be offered would make their product more attractive to regional refineries and petrochemical plants, Bernard said. There is crude blending taking place in the Gulf Coast now, Bernard said, but it’s mostly “in-tank” blending and does not offer as wide a variety of crudes as the Hazelwood project would, he said.

“We’re trying to be much more accommodating to the types of crude that we blend from, accommodating more of the individual shale plays, as well as blending to a very specific crude blend as asked for and determined by our customers: refineries and petrochemical producers…” he said.

“It is our belief that by having better blending, we will be able to accommodate the large variety of crude that is now being discovered in the various shale plays….Within the Eagle Ford, there’s a fairly sizable differential between the west and the east part of that play.” Bernard said plans are to be able to accommodate up to 10 different types of crude.

Located just east of Port Barre, LA, the facility would be capable of storing and blending many different crude oil types on one site, with the capability of achieving precise blends to maximize refinery output and performance, backers said. “This diversity of oil blending options for its refinery customers will be a significant value-added step in the industry’s supply chain. The company expects the facility eventually could become the world’s largest crude oil blending operation.”

Hazelwood would have access to a network of five major pipelines and would operate a barge loading and unloading facility on the Atchafalaya River at the Port of Krotz Springs. The site is also near the Union Pacific rail line and U.S. 190. The site is adjacent to the Bobcat Gas Storage complex, which was developed by Hazelwood Energy Hub President Bob Edmundson a decade ago and later sold to Spectra Energy Corp.