A forecast for a colder winter than last year is expected to drive up U.S. propane consumption, according to a federal outlook. 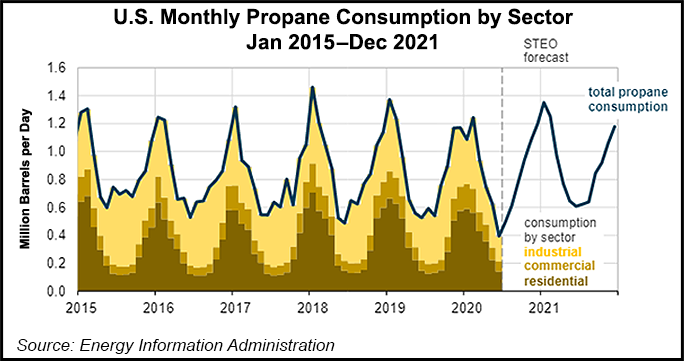 That would bode well for propane, given that about two-thirds of the natural gas byproduct is consumed during the winter months. An estimated 5% of U.S. homes use propane as their primary heating fuel, the U.S. Energy Information Administration (EIA) said in its latest Short-Term Energy Outlook.

EIA expects 5% more U.S. propane consumption this winter when compared with last winter, with cooler temperatures driving up residential space heating and, in doing so, prices. The agency said it also continues to expect more Americans will be working or attending school from home this winter because of the ongoing coronavirus pandemic, pushing up residential heating demand.

Residential propane expenditures this winter are projected to climb 14% overall, with an 18% jump in the Northeast and 12% increase in the Midwest, the two regions where the fuel is most prevalently used, according to EIA.

The agency said it expects increased heating demand “will more than offset reduced demand” for propane as a petrochemical feedstock. Propane is commonly used as a fuel for drying agricultural crops. U.S. Department of Agriculture data and forecasts, EIA noted, show that corn crop maturity is on track with the previous five-year average, and harvested grain moisture content is expected to be lower than a year earlier.

That “means less use of propane for drying crops in commercial grain dryers,” EIA said.

Earlier this month, in its Winter Fuels Outlook, EIA said households across the country – and accounting for all heating fuel sources – would pay more to stay warm this winter because of increased demand. It estimated winter natural gas spending would increase by 6% and electricity by 7% from a year earlier. Natural gas is used nationwide, and it is the most common space heating fuel in 28 states and the District of Columbia.

Natural gas is most widely used in the Midwest, where winter conditions are expected to be harsher than last winter.

After declining this year because of the demand shock imposed by the pandemic in March and ensuing months, EIA expects natural gas prices to rise in 2021, in part because of strong winter demand. The agency predicted that monthly average spot prices would be higher than $3.00/MMBtu throughout 2021, averaging $3.13 for the year, up from a forecasted average of $2.07 for 2020.