Estimates of potential natural gas reserves in the United States stood at a record 3,141 Tcf at the end of 2016, with shale plays accounting for 64% of the total, according to a biennial report conducted by the Potential Gas Committee (PGC). 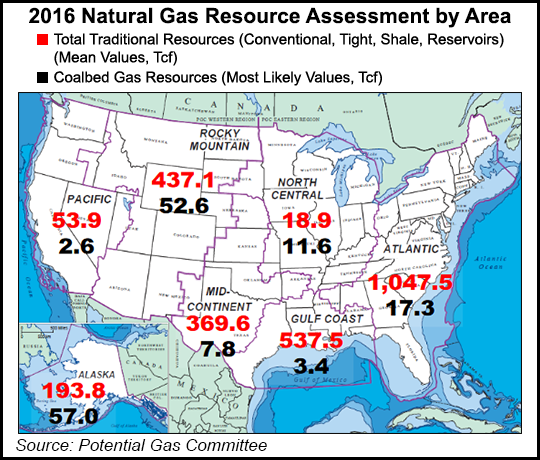 In a new assessment issued Wednesday, the PGC found technically recoverable natural gas volumes totaled a record 2,817 Tcf, a 12% (302 Tcf) increase over the previous assessment conducted at the end of 2014. When coupled with proved gas reserves of 324 Tcf, as recorded by the U.S. Energy Information Administration (EIA) at the end of 2015, potential future gas supplies are 3,141 Tcf.

According to the PGC, “traditional” gas resources — including conventional, tight sand, carbonate and shale reservoirs — accounted for 2,658 Tcf of the technically recoverable volumes, while coalbed methane (CBM) made up the remaining 159 Tcf. Technically recoverable reserves may or may not be produced depending on the price.

The assessment showed gas resources had shifted significantly since 2014, in terms of reservoir type.

“New exploration, more well drilling and continuous improvements in completion and stimulation technologies lead to better delineation and characterization of U.S. gas resources, especially in shale and tight reservoirs,” said Alexei Milkov, director of the Colorado School of Mines’ Potential Gas Agency (PGA). “The record gas resources assessed by the PGC, in addition to robust domestic production levels and booked reserves, paint a picture of strong supply of natural gas in the U.S. for many years to come.”

In determining the country’s future supply of natural gas, the PGC tabulates probable, possible and speculative resources from recoverable gas totals. The committee then adds proved reserves from the EIA.

During a press conference at the American Gas Association (AGA) headquarters in Washington, DC, AGA’s Chris McGill, vice president for energy analysis and standards, indicated the ongoing debate over several natural gas issues — such as the merits of liquefied natural gas (LNG) exports and the increasing use of gas for power generation — could be shaped by the PGC’s latest biennial report.

“We do not believe that incremental elements of demand, like LNG and more gas for power generation growing over time, destroy the market for small volume users,” McGill said. “In fact, if you look at recent history, particularly since the shale revolution, we have a market that’s been demand constrained, not supply constrained. So from our point of view, we see some of these additional demands as a way to continue to balance the market and for the country to really realize the diversity and the size of this resource base that we have.”

McGill said LNG exports currently stand at slightly more than 2 Bcf/d, while exports to Mexico via pipeline are 4 Bcf/d. Domestic production is currently in the low 70 Bcf/d range.

“This report for us is a foundational component,” McGill said. “It says that we’re going to have gas available in the future. But do we have the technical, economic and policy will to produce it?”

PGC researchers divided the United States into seven work areas and 90 geologic provinces for the report. The Atlantic area, which includes the prolific Appalachian Basin’s Marcellus and Utica shales, remained the richest gas area with 39% (1,048 Tcf) of technically recoverable volumes from traditional resources. The Gulf Coast was in second place at 20% (538 Tcf), followed by the Rocky Mountains at 17% (437 Tcf) and the Midcontinent at 14% (370 Tcf).

The PGA provides guidance and technical assistance to the PGC, an independent nonprofit of about 80 volunteers from the gas exploration, production, transportation and distribution industries, as well as in the field/technical services and consulting sectors. The PGA receives financial support from exploration and production companies, gas pipeline companies and distributors, and individuals.