It may be shoulder season, but word of a federally-ordered halt to construction on a portion of a major natural gas pipeline expected to be in partial service this summer was enough to send natural gas forwards markets into a frenzy last week. A bullish miss on the week’s storage report elevated markets even more firmly into the black, with both June and July forward prices averaging 11 cents higher between May 5 and 11, according to NGI Forward Look. 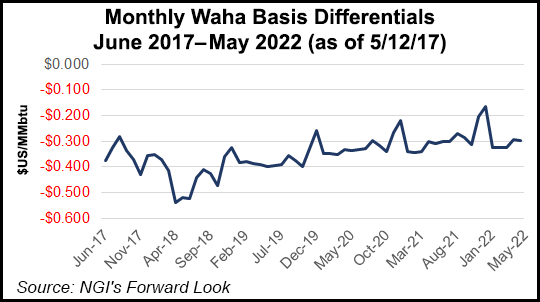 Nymex futures led the charge last week as Tuesday brought about some short-covering following Monday’s steep decline. But the Nymex continued to gain ground throughout the week, with June futures climbing 20.4 cents from Tuesday to Thursday, when it settled at $3.376.

Solid, double-digit increases were seen through the summer, but smaller gains were the norm for futures contracts next year and beyond. The Nymex July futures contract was up 11 cents between May 5 and 11 to reach $3.46, the balance of summer (July-October) was up 10 cents to $3.48 and the winter 2017-2018 was up 8 cents to $3.63. Summer 2018 futures were up a modest 2 cents to $2.95 during that time, while contracts further out the curve also put up only minor gains.

The markets got a double dose of adrenaline last week, first on Wednesday when the Federal Energy Regulatory Commission ordered Energy Transfer Partners to suspend all horizontal directional drilling (HDD) work — except where drilling activity has already begun — pending a third-party review of a recent spill in Ohio.

“It’s a huge impact. The market was expecting all this new gas this winter around that project. If it gets delayed, end-of-season storage under 3.7 Tcf doesn’t look so hot,” a Northeast trader said.

Given the surge in prices since news of the FERC order hit the market, the trader said that prices could go even higher, into the $3.60 range, as production continues to hover around 70-71 Bcf/d.

Indeed, Friday brought about another day in the black for Nymex futures. The Nymex June contract settled at $3.424, up 4.8 cents on the day.

Wednesday’s order led some to speculate about the potential for FERC’s review of the drilling spill to delay the project. But Energy Transfer spokeswoman Alexis Daniel told NGI on Wednesday, “At this time, there has been no change to the construction schedule.”

Data and analytics company Genscape has conducted multiple flyovers of the Rover construction in progress and viewed the pipeline as at risk of delays even before Wednesday’s order.

Rover has beaten expectations with how quickly it progressed in felling trees and other aspects of the project, but “based on our observations of construction progress and the fact that they still have hundreds of miles of pipe to complete — they’re now less than two months away — based on what we’ve seen from other pipes, they need to be much further at this point,” Genscape’s Colette Breshears said Thursday. Combined with the existing challenges, the order suspending HDD activities supports a later in-service date for Phase 1, she said.

That potential delay is what has traders concerned regarding the upcoming winter. “So much is tied to Rover, so the longer it is delayed, the more issues we’ll have. Even if we get just a normal winter, we’ll have some issues,” the trader said.

While concerns over Rover sent shockwaves through the market, Thursday’s storage report from the U.S. Energy Information Administration provided another shot in the arm as the agency reported a 45 Bcf injection into inventories for the week ending May 5, well below market expectations. At 2,301 Bcf, inventories are 372 Bcf less than last year at this time and 275 Bcf above the five-year average of 2,026 Bcf.

“This week marked the first data point since the start of shoulder season where temperatures were comparable to both the five-year average and last year, and the clear read-through from this week is that the natural gas market is meaningfully undersupplied,” analysts at Wells Fargo said Thursday.

The next few storage reports could continue to reflect the market tightness as an increase in cooling demand will work to keep injection sizes limited and gradually work down the surplus in storage the market currently has to the five-year average, forecasters at Bespoke Weather Services said.

“We do note that over the last week we saw a decent bump higher in production that appeared to be more than just daily or weekly noise, and this larger tick higher could limit prices below $3.50 unless weather becomes very much more bullish. This also increases the odds of some kind of small pullback after such a rally, but we note weather generally still remaining a bit supportive,” Bespoke said.

The New York-based weather forecaster said conﬁdence is high in widespread heat ﬁrst in the Midwest then into the Northeast for days five to eight as ridging slides through, and lingering warmth is still expected from there, which will keep cooling demand elevated. And while days 12-15 have decent risk of moderating, this comes after this spike in cooling demand.

Looking closer at the markets, most markets followed the lead of Nymex futures. On a national level, forward prices for the period between May 5 and 11 were up an average 11 cents for June, 11 cents for July, 10 cents for the balance of summer (July-October) and 9 cents for the winter 2017-2018, according to Forward Look.

Dominion forward prices, however, fell short amid speculation of Rover’s delay as the lack of takeaway capacity continues to leave regional production stranded. Dominion June forward prices climbed just 6 cents during that time to reach $2.775, July rose 4 cents to $2.81 and the balance of summer edged up just 1 cent to $2.83. The winter 2017-2018 climbed 5 cents to $3.17, more in line with the rest of the country. “That suggests to me that the market isn’t quite as concerned about Phase 2,” said NGI’s Patrick Rau, director of strategy and research.

Meanwhile, another recent news development appears to be providing some much-needed price relief to Waha, which has been increasingly depressed amid growing associated gas production due to oil drilling in the Permian Basin.

Mexico has brought two large pipeline projects into service that could facilitate increased U.S. exports, with one of the new U.S. lines to feed those reportedly flowing, according to Genscape. Energy Transfer’s Comanche Trail went into service on Jan. 30, and while Genscape’s proprietary monitors on the pipeline have not yet shown the use of any compressors, it is possible for systems to flow limited amounts of gas without compression.

“Comanche was authorized to begin exporting back in January, but had not begun flowing as the downstream Mexican takeaway pipes were not ready,” Genscape said.

That has changed according to Sempra’s Mexico subsidiary, IE Nova, who stated in its latest earnings call that their San Isidro – Samalayuca system has been brought into service. IE Nova also stated they have brought the Guaymas – El Oro segment of the Sonora Pipeline on Mexico’s West Coast into service.

While Genscape’s proprietary observations, pipeline data and nature of these projects do not give indication that exports have registered a significant increase yet, the company expects exports over the next seven days to see gains. “But this will more likely be a product of temperatures in northern Mexican markets nearing 100 degrees F,” it said.

Given the new outlets for gas at Waha, and the rising temperatures in the region in the upcoming summer months, forward prices there jumped significantly throughout the week. Waha June forward prices shot up about 16 cents from May 5 to 11 to reach $3.00, July rose 13 cents to $3.14, the balance of summer picked up 11 cents to $3.15 and the winter 2017-2018 climbed a more modest 7 cents to $3.25, Forward Look data shows.