Tallgrass Pony Express Pipeline LLC is proposing to more than double the capacity of its crude oil pipeline system by expanding into several areas of Colorado and Wyoming, including the Denver-Julesburg (DJ) Basin, the Niobrara and Codell formations, the Bakken Shale and the Powder River Basin. 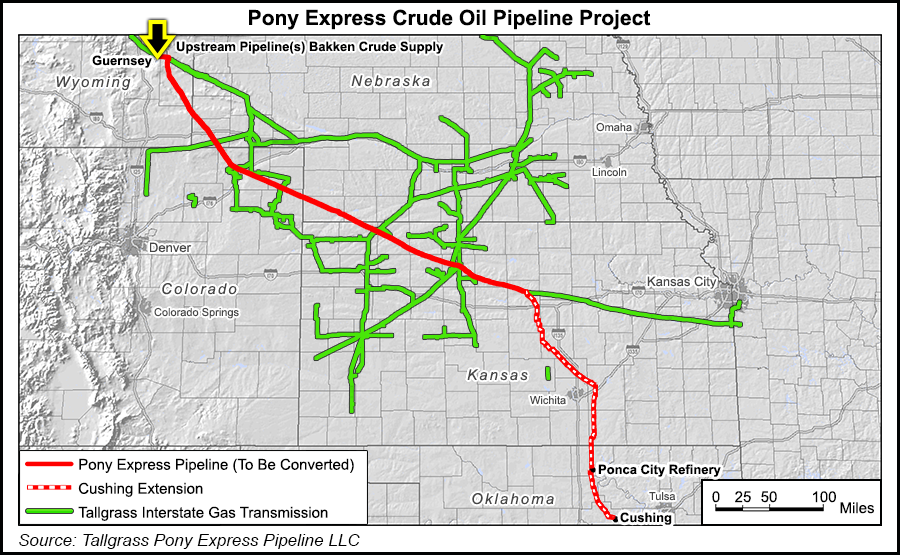 Pony Express said Friday it has been in talks with prospective shippers for a proposed capacity expansion of up to 400,000 b/d. The company said that if it secures commitments, it would conduct a binding open season — more than likely in November — where it would seek shipper commitments to transport crude oil to multiple potential delivery points in and around Cushing, OK.

Pony Express added that if it is “able to obtain sufficient commitments,” it would finalize the design of the expansion project “to recognize scalability benefits afforded by the existing system and the open season results. Construction and operation of the expansion would leverage off of the footprint and synergies of Pony Express’s existing crude oil pipeline system, including its multi-line rights-of-way.”

According to Pony Express, the proposed expansion would be operational by 2H2016 and would include the construction of new pipeline facilities. The company added that from mid-2015 until the new facilities are placed into service, shippers committed to the expansion would have access to approximately 100,000 b/d of interim increased capacity on the current Pony Express system, in proportion to their volumetric commitment to the expansion.

“This short-term capacity increase is expected to be primarily achieved through the use of drag reducing agent on the existing system,” Pony Express said.

Pony Express is awaiting completion of a new 260-mile section of 24-inch diameter crude oil pipeline from Lincoln County to an existing petroleum facility at Cushing. The new section is expected to be in service in October, will boost the entire system’s length to 690 miles, and will have delivery points at Phillips 66’s refinery at Ponca City, OK, and at Kinder Morgan’s Deeprock oil storage facility at Cushing.

The company is also awaiting completion of the 66-mile Northeast Colorado Lateral, which will originate in Weld County and interconnect with the Pony Express mainline at a point just east of Sterling, CO. The lateral is expected to be in service during 1H2015.

Collectively, the mainline and the lateral are to be powered by 15 pump stations. Capacity out of Guernsey is to be 230,000 b/d, while outbound from Sterling it will be 320,000 b/d. If the additional expansion moves forward, the system’s capacity would be expanded to 720,000 b/d.