A new poll shows that residents of New York State and Pennsylvania have very divergent opinions on Marcellus Shale gas extraction, with most New Yorkers opposed, a majority of Pennsylvanians in favor, and even more of the latter in support of adopting a severance tax. 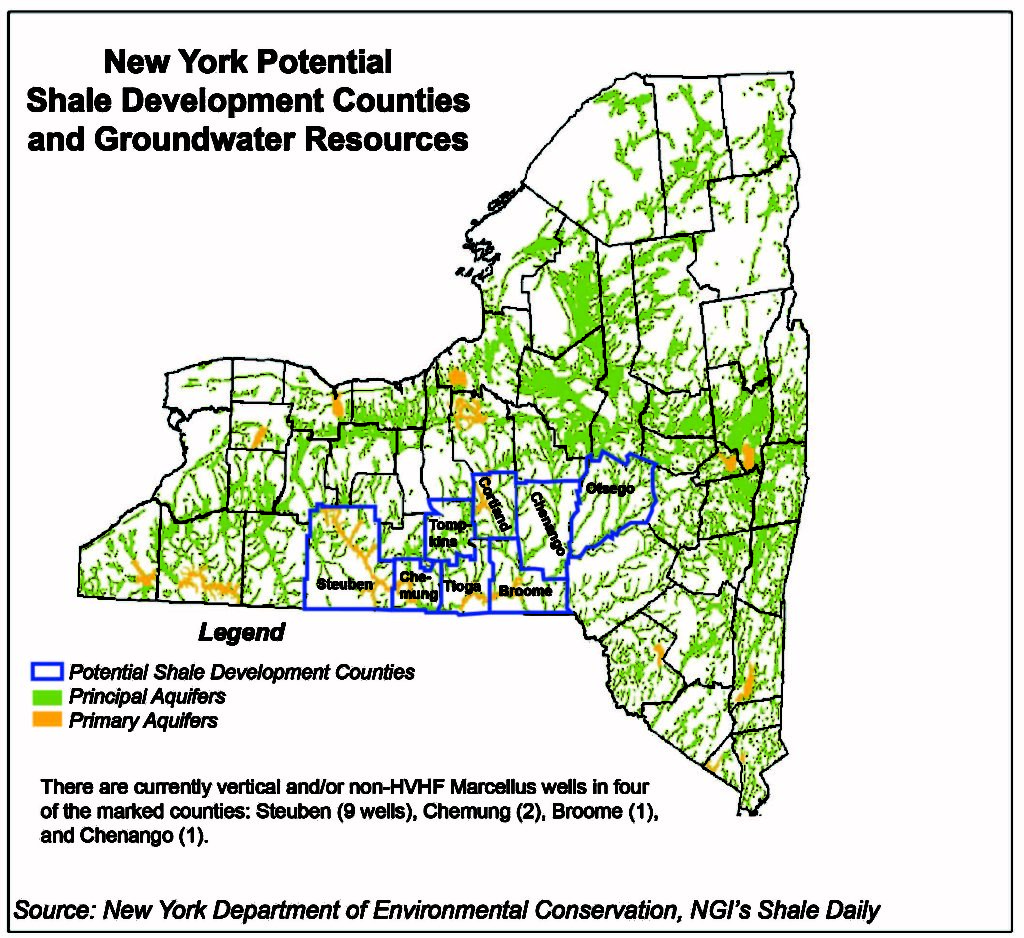 The 18-page poll — a collaboration between the Center for Local, State, and Urban Policy at the University of Michigan’s Gerald R. Ford School of Public Policy; the Muhlenberg Institute of Public Opinion at Muhlenberg College, and the University of Montreal — also found that respondents in both states disapproved of their respective governors’ handling of shale development issues.

The poll found that, on a scale of 0 to 10 — where 0 indicates “no risk” and 10 indicates “extreme risk” — 23% of New Yorkers pegged fracking at a 10, while 27% of Pennsylvanians ranked the practice at a 5. But in a separate, open ended question, 44% of Pennsylvanians and 42% of New Yorkers identified “water problems” as the most important risk from fracking; no other potential risk from fracking registered in double digits.

New York and Pennsylvania respondents also disapproved, by marks of 36% and 47%, respectively, their governors’ handling of natural gas drilling in their states. New York Gov. Andrew Cuomo (D) and Pennsylvania Gov. Tom Corbett (R) are both up for reelection this November.

“Cuomo has pledged to render a decision on [fracking] in the near future, although it has become increasingly unlikely that a decision will arrive before the fall 2014 election,” the pollsters said. Meanwhile, in Pennsylvania, “Corbett contends that his approach to shale has paid handsome economic dividends to Pennsylvania and that he should be allowed to sustain that approach in a second term…[but] Tom Wolf, the Democratic nominee for governor, has made the adoption of an extraction tax on shale gas and a tougher regulatory regime a key component of his campaign,” (see Shale Daily, May 21; Dec. 17, 2013).

In questions posed just to Pennsylvanians, 62% of respondents said they supported a severance tax on the value of extracted oil and natural gas, while 29% were opposed and 9% were not sure. Also, a combined 57% either strongly (34%) or somewhat (23%) disagreed that gas drillers would leave the Keystone State if taxes were increased on them, and half said the ongoing moratorium on high-volume hydraulic fracturing (HVHF) in New York has benefited Pennsylvania economically; 32% were unsure.

Across the state line, New Yorkers were asked exclusively if the Empire State “lost out on economic growth to Pennsylvania” due to the HVHF moratorium; 42% said yes, while 27% were not sure.

Despite the sentiment over economics, most respondents in both states do not believe the regulatory decisions followed by one state will impact decisions made in the other, and vice versa. In separate questions posed to both states’ residents, 34% of New Yorkers said Pennsylvania’s decision to allow fracking would have no effect on the HVHF moratorium in New York. Likewise, 39% of Pennsylvanians said New York’s moratorium would have no effect on them.

The pollsters surveyed 405 New York residents and 411 Pennsylvania residents via telephone in March, April and May of this year, using U.S. Census data to draw respondents “from all regions of each state and comprising statistically-representative profiles of their respective citizens.” A spokeswoman for the University of Michigan said the poll has a margin of error of plus/minus 5%.