Aggressive selling in the last half hour of trading accelerated early losses for natural gas futures on Tuesday, with the June Nymex contract settling 10.6 cents lower day/day at $1.720/MMBtu. July dropped an even sharper 12.0 cents to $1.965. 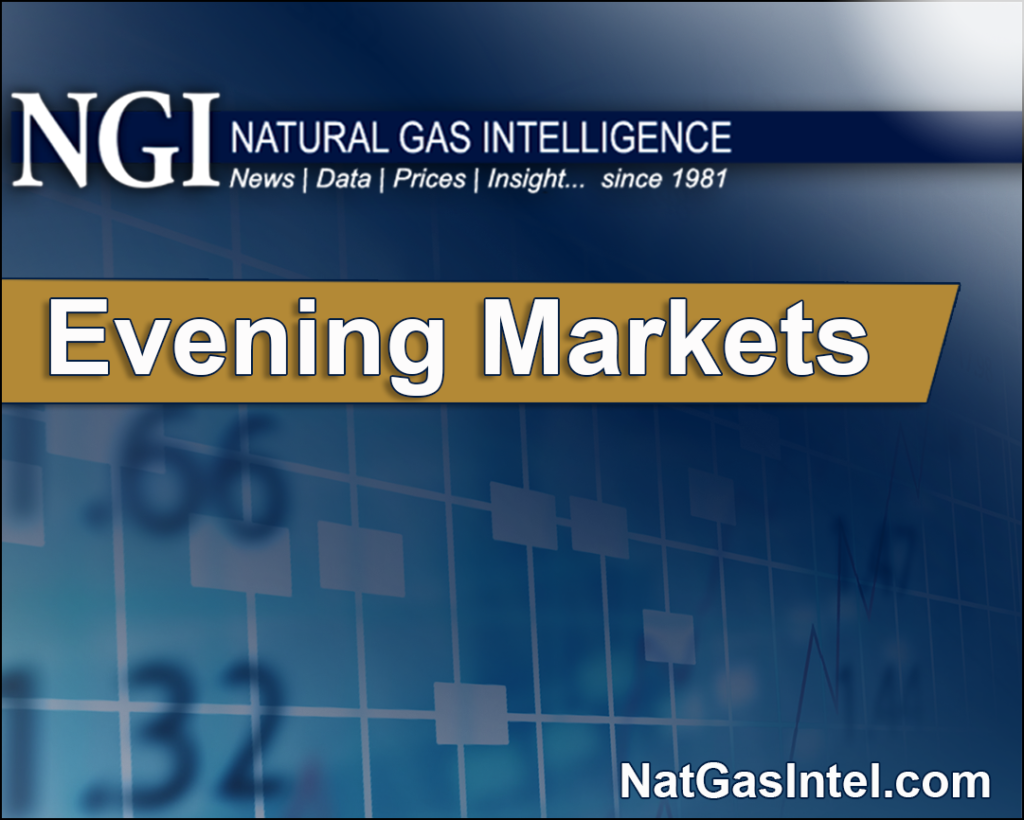 Spot gas prices continued to lose ground with pleasant temperatures in the forecast for most of the country in the coming days. NGI’s Spot Gas National Avg. slipped 6.0 cents to $1.585.

Ever since the June contract spiked to $2.15 on the heels of the Texas Eastern Transmission (Tetco) pipeline explosion, all bounces have been sold, NatGasWeather noted. “To our view, this keeps bears in control unless $1.85 is taken back.”

NatGasWeather had been looking to see whether June prices would hold above $1.80 on Tuesday, “and that failed.” The firm expects the next important battle to be whether the July contract is able to hold or remain above $2.00.

The overnight weather data was little changed, according to the forecaster, with chilly conditions lingering across the Midwest and Northeast in the next few days, followed by warming across the northern United States. This is expected to usher in “perfect” temperatures in the 70s to lower 80s from Chicago to New York City. Meanwhile, the southern part of the country is set to become increasingly warm, “but still not quite hot enough to intimidate.”

Liquefied natural gas (LNG) demand took a big hit on Tuesday, with feed gas volumes plunging more than 1 Dth day/day down to less than 6 million Dth, according to NGI’s U.S. LNG Export Tracker. Furthermore, there hasn’t been much improvement in weather-adjusted power burns as a partial economic recovery is underway, according to Bespoke Weather Services.

Even though the firm’s production data showed a drop of more than 1 Bcf in output early Tuesday, “this keeps balances too loose to sustain any rally at the front of the curve, as the current path still poses risks of completely filling storage this fall.

“A hotter summer will help once we get there, but in the meantime, we need to see significant tightening to support nearer-term prices,” Bespoke said. “…Any rally will likely be sold into ultimately, until the data shows clearer improvement and we avoid further LNG declines.”

Noting the “startling” spread between the June and July Nymex contracts, which sat Tuesday at 24.5 cents, EBW Analytics Group said it was the widest one-month discount at the front end of the strip since October 2016. The discount is even more surprising given that it is occurring at the beginning of the injection season, according to the firm.

“The last time a non-winter contract spread became this large was in 2012,” EBW said.

The scheduled beginning of the United States Natural Gas Fund exchange-traded fund rollover on Wednesday may create further volatility in the prompt versus second month spread, according to the firm.

“It is unclear precisely why the spread is blowing out,” EBW said. “If it is due to storage operators eyeing the super contango versus winter contracts — and a lack of salt storage capacity dedicated to capturing smaller spreads versus a peak summer contract — it may be a bearish signal for the next month.”

Gripped by seasonably mild weather and a lack of strong demand, spot gas markets across the Lower 48 declined on Tuesday. Lingering chilly weather on the East Coast failed to spark any continued momentum in those markets, with prices giving back most of Monday’s gains.

Tetco is scheduled to conduct cleaner tool runs on the Southern 36-inch diameter line in M3, cleaning Line 1 on Wednesday and Line 2 on Thursday. During these tool runs, capacity in Pennsylvania, from Bedford to Heidlersburg, is expected to be cut by as much as 729 MMcf/d, impacting flows by up to 251 MMcf/d compared to maximum flows from the previous two weeks, according to Genscape Inc.

“However, M3 flows have been higher than seasonally normal due to the recent cold spell in the Northeast, and as such, this maintenance would not be impactful compared to the two-week average,” Genscape analyst Josh Garcia said.

With the cold spell forecast to stick around through Thursday and heating degree days expected to be double the 30-year norm, Genscape had expected bullish pressure for M3 prices. However, the pricing hub actually posted one of the largest declines in the region on Tuesday, NGI data show.

Cash prices from the Southeast to Louisiana and the Midcontinent were down less than 10.0 cents day/day, while Chicago Citygates next-day gas tumbled 11.0 cents to $1.635.

Texas markets posted moderate losses of less than a dime across the majority of hubs, while Permian Basin hubs bucked the trend and recovered a good chunk of Monday’s losses. Waha rose 3.5 cents to average $1.505, moving to a mere 11.0-cent discount to benchmark Henry Hub.

Genscape noted that Waha spot basis averaged only 19 cents below Henry during last week’s trading, its highest weekly average in nearly two and a half years. Given the recent improvement in Waha basis, the firm said receipts of associated gas from the Delaware sub-basin’s Alpine High play in West Texas onto El Paso Natural Gas Pipeline had been “considerably elevated” over the last two and a half weeks.

However, after the sharp drop into negative territory on April 20’s trade date, Waha cash spiked to $1.21 on April 23, according to NGI data. It has averaged $1.37 since then, only dropping down as low as 69 cents. “In that same time frame, Alpine High receipts averaged 354 MMcf/d, essentially a 300 MMcf/d increase from the previous month’s average,” Bernardi said.