Natural gas forward prices for October rose an average 17 cents from Sept. 8-14 as weather forecasts called for warmer-than-normal temperatures to finish out the month, according to NGI’s Forward Look. But the market’s realization that demand destruction caused by Hurricane Irma may have been overestimated also weighed on forwards last week. 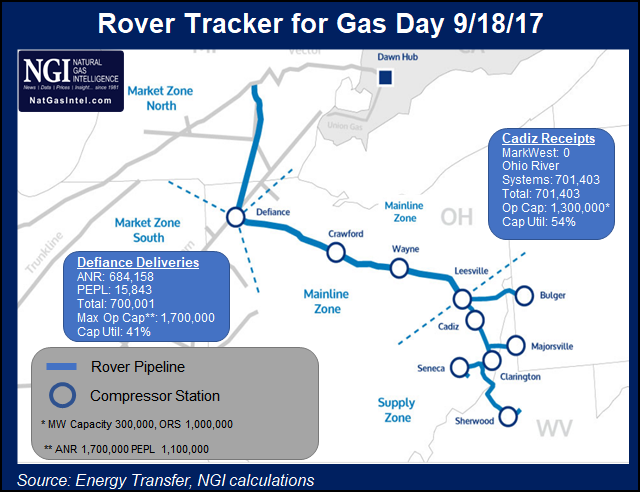 Nymex futures led the way for most pricing locations for the week, with gains steadily accumulating throughout the week following the dramatic sell-off that occurred Sept. 8 ahead of Hurricane Irma’s landfall. The Nymex October futures contract jumped 18 cents from Sept. 8 to Sept. 14 to reach $3.07. November was up 16 cents to about $3.13, and the winter 2017-2018 was up 14 cents to $3.30. Even the calendar year 2018 strip climbed 7 cents to settle Thursday at $3.08.

Hurricane Irma made landfall in Florida early Sept. 10 as a Category 4 storm, strafing the state and knocking out power to millions.

“Over the period of Sept. 5-13, Southeast power burn has dropped 22%, or 2.06 Bcf/d,” said NGI Market Analyst Nathan Harrison. “However, it looks like some of this recent demand loss may have been offset, to some extent, by a perfectly timed resurgence in liquefied natural gas exports, which climbed 2.18 Bcf/d over the same period.”

As power restorations in Florida continue, thereby increasing demand in the gas-intensive state, so will demand in other areas of the United States as a ridge of high pressure in the west-central United States should shift over the east-central part of the country. The system is expected to bring above-average cooling degree days (CDD) as daytime highs reach the 80s and 90s over all but the far northern and western United States, NatGasWeather said.

“We expect the warm ridge to dominate east of the Rockies through Sept. 26, and potentially through the end of the month, leading to what we would view as slightly bullish weather sentiment going forward,” NatGasWeather said.

The forecaster said the latest data is mixed as to whether the warm U.S. pattern will make it through the last few days of the month, but it sees the bias remaining toward the warm camp, just with more to prove. Forecasters at New York-based Bespoke Weather Services aren’t so convinced, however, as the overnight weather models trended “a little less bullish.”

More specifically, Bespoke said cooler trends have shown up in medium-range forecasts across the Southeast and much of the East Coast. Hurricane Jose, currently a Category 1 storm in the Atlantic, looks more likely to move at least near the East Coast, and that, combined with another nine-to-12 day tropical threat in the Southeast, could work to keep temperatures a bit below average even as cooling demand really gets going in the center of the country, the weather forecaster said.

Similarly, in the 12-15-day timeframe, Bespoke has continued to see forecasts back off the sustained heat shown in the medium-range, demonstrating a gradual shift to a colder pattern.

“If the flip colder is strong enough, it could end up being bullish by increasing heating demand, but confidence is not yet there for that and thus far, trends are seen just reducing cooling demand. Weather remains supportive in the medium-range, but much of this has been priced in,” Bespoke’s chief weather analyst Jacob Meisel said.

Indeed, the recent rally in the October futures contract hit the skids on Friday, falling to a $3.006 low before ultimately settling at $3.024, down 4.6 cents on the day.

NGI’s Patrick Rau, director of strategy and research, said the prompt-month was due for a correction from a technical standpoint. “The triple whammy of October reaching overbought status, trading at the top of its 20-day Bollinger band and reaching resistance in the $3.10-3.11 range that has been tested but unbroken four times now, all provided technical induced selling on Friday.”

Rau said he sees support at $2.87, which is marked by both the previous down trend-line as well as the bottom of the current Bollinger Band.

For its part, Bespoke said while the price action comes as no surprise, it sees further support around $2.97, which is where the current 60-day moving average sits.

“Such a pullback could be healthy in a time of bullish seasonality as well, especially with slight bearish risks from Jose and with such large injections on tap,” Bespoke said Friday. “The market remains tight enough for downside to be relatively limited here, especially with cash finally getting a bid, but following a rally through the week and a late-day reversal [Thursday], we would expect a small pullback before the market reassess the situation next week.”

Indeed, storage inventories continue to be closely watched as the traditional injection season nears a close at the end of October. On Thursday, the U.S. Energy Information Administration reported a 91 Bcf injection into storage for the week ending Sept. 8, about 6 Bcf greater than expectations. Inventories now stand at 3,311 Bcf and are 179 Bcf lower than last year and 43 Bcf above the five-year average.

The larger-than-average storage injection took into account demand losses from Hurricane Harvey as well as the Labor Day holiday. And with Irma dialing back demand during the second week of September, another hefty storage injection appears in the cards next week. NatGasWeather is projecting an injection in the 82-91 Bcf range, which compares to the 73 Bcf five-year average.

“Again, bigger picture, surpluses will peak around plus-48 Bcf next week, then retreat back towards even due to the warm ridge shifting over the southern and east-central U.S. But it would need to last through early October to drive enough demand to finally switch surpluses to deficits,” NatGasWeather said.

Even as production is set to exit the year above year-ago levels, storage remains a critical component of the overall supply/demand landscape as some industry executives are projecting increasing demand during the coming winter.

Macquarie Research’s Vikas Dwivedi, global oil and gas strategist, was expecting demand this winter only to rise 3.5 Bcf/d, but he said production wasn’t growing fast enough to fill the capacity coming online. That, along with underinvestment in storage and a host of other factors, makes the case for market bulls, he said at the conference.

Taking a closer look at the markets, most pricing locations followed the lead of Nymex futures. Appalachian markets, however, continued to march to the beat of their own drum even as new pipeline capacity has entered service in the region.

Energy Transfer Partners LP’s Rover Pipeline began flowing up to 700 MMcf/d of volumes out of the region, though basis has continued to weaken in cash and forward markets due to limited market access to the pipe.

At Dominion, October forward prices fell 8 cents from Sept. 8-14 to reach $1.293, or a 26-cent discount to the Nymex Henry Hub October contract, according to Forward Look. November slid 14 cents during the same period to $2.035, more than $1 below Henry Hub. Winter 2017-2018 (November-March) prices fared better, rising 3 cents over the week to $2.64, but still maintained a steep 66-cent discount to the benchmark.

After receiving in-service authorization late last month and starting up its Phase 1A segment over Labor Day weekend, Rover was flowing just above 700 MMcf/d last Tuesday from Cadiz, OH, to interconnects with Panhandle Eastern and ANR in Defiance, OH, according to NGI calculations using information from ETP.

To help keep tabs on the evolving Marcellus/Utica shale takeaway picture as Rover ramps up to its full 3.25 Bcf/d of designed capacity in the coming months, NGI has debuted a daily Rover Tracker. The Rover Tracker gives an up-to-date snapshot of receipts and deliveries on the project and will continue to expand as new segments enter service.

With September demand in the Northeast trailing year-ago levels, and regional production reaching record levels, prices have struggled to get off the ground.