PJM Interconnection, the largest U.S. power grid operator, is forecasting adequate supply to meet the electricity needs of its 65 million customers this summer. 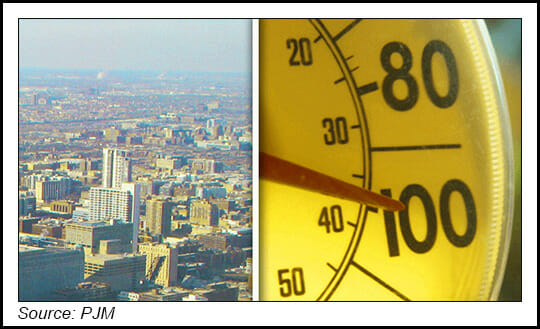 PJM, which serves 13 states and the District of Columbia, expects peak demand of about 149,000 MW this summer, but it has performed reliability studies at loads in excess of 155,000 MW.

Last year’s peak demand across the grid was about 144,000 MW, occurring on July 20. PJM noted that the Covid-19 pandemic impacted demand last year. PJM is forecasting higher demand this summer since the pandemic’s impacts on demand have lessened, and since warmer-than-normal temperatures are expected.

“Planning and preparation are key,” said CEO Manu Asthana. “PJM and our members continually coordinate and prepare for peak load operations throughout the year.”

Other regions of the country, however, face a shakier outlook this summer because of the exceptionally hot and dry conditions expected, and from the country’s evolving generation mix.

The North American Electric Reliability Corporation (NERC) is expecting an elevated or high risk of energy shortfalls throughout much of North America this summer. The board of trustees, during its quarterly meeting last week, received a preview of NERC’s 2021 Summer Reliability Assessment scheduled for publication at the end of this month.

California, Texas, New England and the Midwest Independent System Operator (MISO) regions face an “elevated risk” of supply shortfalls, NERC forecasters found. “Of greatest concern in the high-risk category is California, where up to 11 GW of additional transfers are expected to be needed in late afternoon to offset reduced solar output.

“This is in contrast to 1 GW of transfer needed on a normal peak day.”

The California Independent System Operator (CAISO) said last week it expects “electricity supply conditions for the upcoming summer to be in better shape than last year, but the power grid is still susceptible to stress during extreme heat waves” across the West.

CAISO said it has procured additional power supply resources and implemented a series of market redesigns and policy changes to improve preparedness for the summer.

“However, if heat events similar to those that gripped the western states region last summer occur, imported energy from other states could be limited, and the power grid will be at risk of supply shortages and possible emergency conditions…”

The Electric Reliability Council of Texas (ERCOT), which serves 90% of the state, is forecasting record breaking electric demand this summer due to expected hot and dry conditions, and continued economic and population growth throughout the region. ERCOT expects to have a 15.7% reserve margin for the anticipated summer peak demand of 77,144 MW, which would shatter the current record of 74,820 MW set on Aug. 12, 2019.

“The Colonial pipeline attack underscores the interconnectedness of electricity with other infrastructures and is the reason we must redouble our focus on the reliability of the pipeline system that delivers essential fuel,” Robb said.  “If this had happened to a major natural gas line serving electricity generators under extreme cold weather conditions, the results could have been catastrophic.”