Pioneer Natural Resources Co. CEO Scott Sheffield said Wednesday he is optimistic “that the oil price is going to continue to march forward, with probably more upside than downside.” 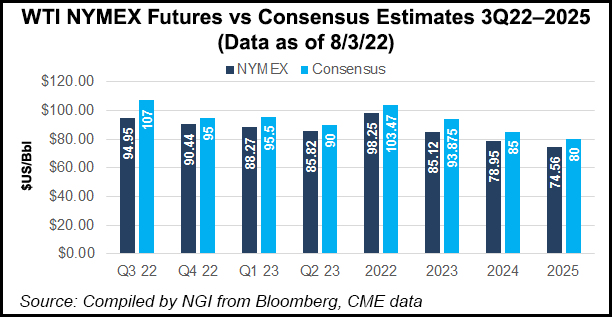 The always-candid executive hosted a conference call to discuss second quarter earnings for Irving, TX-based Pioneer, the largest producer in the Permian Basin.

“Demand’s coming back around the world, people are flying more, and China’s going to come back,” Sheffield said.

“They just don’t have the supply,” Sheffield said.

Amid the bullish outlook, Pioneer would continue to target production growth of no more than 5% annually, Sheffield said.

Regarding the Inflation Reduction Act unveiled last week by Senate Democrats, Pioneer management does not expect material impacts from the proposed methane fee or increase in the minimum corporate tax rate.

This is because of the company’s ongoing and planned efforts to curb methane emissions intensity, COO Richard Dealy said.

Pioneer also expects its effective tax rate in 2023 to be above the 15% corporate minimum proposed in the bill, added CFO Neal Shah.

Pioneer has raised the midpoint of its 2022 capital budget by 7%, primarily due to the cost of materials, management said. The company now is forecasting capital spending in the range of $3.6-3.8 billion, versus previous guidance of $3.3-3.6 billion.

The increase reflects inflationary pressures seen “in diesel and steel primarily, and to a lesser extent in sand, chemicals and labor,” Dealy told analysts.

He said Pioneer expects “modest production growth this year and a reinvestment rate of less than 30%, and returning the vast majority of our free cash flow back to investors via dividends and opportunistic share repurchases.”

Pioneer plans to operate an average of 22 to 24 horizontal rigs and about six hydraulic fracturing fleets in the Permian’s Midland sub-basin for the full year, and to place 475 to 505 wells on production.

Two of the fleets are to use simultaneous fracturing, aka simul-frac, an increasingly common technique allowing the completion of multiple wells at once on a drilling pad.

“Our implementation of simul-frac has been a great success in both reducing cycle times and costs,” said Dealy. He noted that Pioneer “has completed the most simul-frac wells of any operator.”

As a result of simul-frac and other efficiency improvements, Pioneer has doubled its completed feet per day since 2018, Dealy added, noting the firm plans to add a third simul-frac fleet early next year.

Dealy said despite the tight market for drilling and completions equipment, he has “no concern” about Pioneer’s ability to get the services and equipment it needs.

Pioneer has increasingly focused its efforts on the Midland, which contains more than twice the remaining “top-tier” drilling inventory as the Delaware sub-basin, according to Dealy.