Physical natural gas trading for the week ended Aug. 11 was a tale of two stories, as Northeastern, Appalachian and Californian price points were predominantly in the red on moderating temperatures and pipe constraints, while the rest of the country’s locations inched higher from a couple of pennies to nearly a dime. 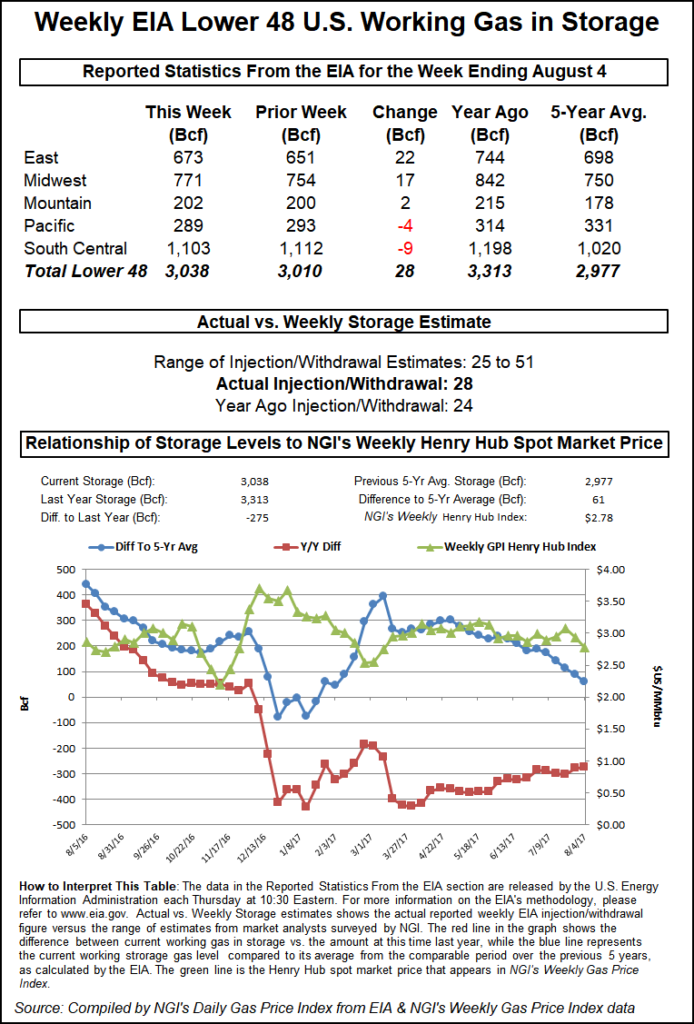 The small gains at a majority of points across the nation were able to mostly offset the more significant drops of the three regions, resulting in an NGI Weekly National Spot Gas Average of $2.60, down a mere 2 cents from the previous week. The natural gas futures arena saw a much different trend for the week. Aided by a bullish surprise in Thursday’s storage report, the September contract bulls romped higher for the week to close at $2.983, up 20.9 cents from the previous week’s finish.

The largest physical price movers for the week were declines, with points in the Northeast leading the slump with drops mostly between 30 to 50 cents. The region’s average for the week slid 41 cents to average $2.15, with Algonquin Citygate and Algonquin Citygate (non-G) recording the greatest dips — down 50 cents and 51 cents, respectively, to a shared $2.13 average.

Californian points declined 12 cents on average to $2.88, with SoCal Citygate coming off a whopping 31 cents, while the Appalachia regional average slid 11 cents to $1.79, with Texas Eastern M-3 Delivery leading the charge with a 15-cent drop to average $1.69.

The big news on the week was Thursday’s Energy Information Administration’s storage report for the week ended Aug. 4, which revealed a smaller-than-expected 28 Bcf build.

Heading into Thursday’s 10:30 a.m. EDT report, September futures were hovering around $2.895, but in the half hour after the number was revealed, the prompt month contract sprung to a high of $2.989, up 10.6 cents from Wednesday’s regular session close.

Citi Futures’ Analyst Tim Evans called the storage number “bullish,” noting that it could be a sign of things to come.

“The 28 Bcf net injection was bullish relative to both expectations for a more robust 36 Bcf build and the 53 Bcf five-year average refill,” he said. “The smaller build implies a somewhat tighter balance for the weeks ahead.”

The report may be an indicator of things to come, but traders note that the market has visited the $3 level numerous times in the last several weeks only to come away disappointed.

In the days leading up to the storage report, Wells Fargo Securities LLC had been expecting a 35 Bcf injection, while Tradition Energy was looking at a 40 Bcf build, and a Reuters survey of 24 traders revealed an average 36 Bcf increase with a range of injections from 25 Bcf to 49 Bcf. Last year 24 Bcf was injected for the week.

September natural gas traded in a holding pattern on Friday, while the cash market retreated ahead of the weekend. Declines in the Northeast and the Southwest offset gains in the Southeast and Midwest, and the NGI National Average for weekend and Monday delivery climbed a penny to $2.65/MMBtu.

The September Nymex contract held on to most of Thursday’s 10-cent advance, but not much else. At the close Friday, September had settled at $2.983, down $.002, while October also finished down less than a penny at $3.008. September crude oil finished up 23 cents on the day, settling at $48.82/bbl.

Bolstered by a lean storage report and forecasts showing warming temperatures toward the end of August, Henry Hub futures gained throughout the week following sustained declines through the back half of July.

“The natural gas market,” like crude, “is also consolidating today,” Evans wrote in a Friday note to clients, “but in contrast to the petroleum markets this is taking place after a two-day surge in prices supported by both a smaller-than-expected storage injection for the week ended Aug. 4 and a temperature forecast that is now trending warmer.

“The recovery in price this week is calling fresh attention to the declining year-on-five-year average storage surplus, which could even become a deficit within the next few weeks.”

In a Friday morning note to clients, PointLogic’s Jack Weixel said his firm expects the year-on-five-year storage surplus to evaporate over the next 13 weeks, finishing the injection season 7 Bcf below the five-year average at 3,854 Bcf.

NatGasWeather.com said in a mid-day update that the forecasts have shifted “a little hotter for after Aug. 20, while little changed before then. Specifically, numerous weather systems with showers and cooler-than-normal temperatures will continue across the central and northern U.S. through early next week as highs only reach the 70s and 80s for regionally light demand.”

With warm temperatures in the western and southern United States expected to help keep overall near-term demand “slightly stronger than normal…national demand should further increase above normal Aug. 20-25, as hot high pressure expands and gains ground to dominate much of the southern two-thirds of the country,” the firm said.

The bulls had a good week in the futures market. But the weak pricing observed since late July appears to have taken its toll on natural gas-directed drilling based on the latest data from Baker Hughes Inc. (BHI).

The U.S. rig count finished the week at 949, down from 954 the week before, according to BHI. Eight natural gas-directed rigs left the patch in the United States, canceling out a weekly gain of three oil-directed rigs. After posting heavy losses the previous week, the Gulf of Mexico added a rig to finish at 17, in line with year-ago totals.

“It seems like the fallback in gas prices in recent weeks may be starting to translate to a lower gas-focused rig count,” said NGI’s Patrick Rau, director of Strategy & Research. “The majority of those released rigs were in Texas. It will be interesting to see whether the further delay in the Rover Pipeline will lead to any kind of rig reductions in Ohio and Pennsylvania.”

Rau said the gas-directed rigs that left the patch were probably lower horsepower rigs as exploration and production companies continue to prize the higher-spec rigs capable of drilling longer laterals.

“In fact, demand for those will likely continue to grow, even if the absolute U.S. rig count falls over the coming weeks,” Rau said. “In the face of lower commodity prices, producers will seek to lower their costs and improve their efficiencies all the more, everything else being equal. More and more these super spec rigs are becoming the vehicle to drill those more efficient, longer-lateral wells, and once they get their hands on a super spec rig, operators are loathe to let go.”

Cash prices in the Northeast and Appalachia continued their volatile ways Friday, with packages for weekend delivery showing double-digit losses at most points, driven by lower weekend demand and pipeline constraints.