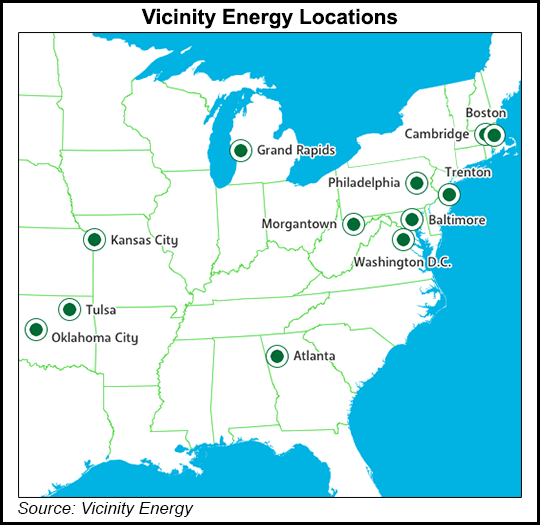 Vicinity said its existing contract with PGW, first executed in 1996, expires at the end of next year. It said it has helped to ensure its customers in Philadelphia’s city center receive “clean, reliable and affordable steam service.”

Under a new contract offer made last February, PGW would continue to transport gas to Vicinity’s Grays Ferry combined heat and power (CHP) plant in South Philadelphia. However, the price would be hiked by more than 1,000%, Vicinity said. It also noted that it purchases the natural gas from third-party suppliers.

“In its formal complaint to the PUC, Vicinity contests the drastic increase in the cost to transport gas through PGW’s pipelines and claims it is anti-competitive, unreasonable and an attempt to impose significant anti-competitive pressure on Vicinity’s mission critical energy services,” the company said.

As “PGW’s largest customer,” Vicinity said it consumes gas at the CHP plant to generate electricity and steam. The electricity is supplied to the PJM Interconnection LLC’s electric grid. The steam is used to heat and cool buildings and provide for critical processes such as sterilizing labs and surgical equipment in hospitals.

“Because the steam is a byproduct of the CHP process, it is a clean, low-carbon and efficient alternative to directly consuming gas onsite in individual buildings,” said Vicinity.

Vicinity also maintains PGW’s new contract offer would cause it to shift from firm gas delivery to interruptible supply scenario.

“If permitted, this provides PGW with the ability to suspend the supply of gas to Vicinity at any time, which would interrupt the co-generation of electricity and steam in its plant,” said Vicinity. “While Vicinity Energy has backup options (including dual-fuel steam generators, portable steam generators and fuel oil reserves) and system redundancies, interruptible supply is unacceptable to Vicinity and the needs of its customers, including major hospitals, research labs, universities and government buildings.”

Vicinity said it has repeatedly sought to resolve the dispute and outreach efforts continue. However, it claimed that a “huge divide” remains between both parties as PGW has refused to “provide any justification or substantiation of their proposed increases.”

Citing PUC’s website, Vicinity said the complaint process would involve a legal proceeding in which it would provide evidence to a PUC administrative law judge. The formal complaint review process is expected to be at least six months.According to PGW’s website, the utility has embarked on a cast iron gas main replacement program across its service area. In February 2020, PGW estimated the pipe replacement program would take about 40 years to complete, a marked decrease from the 48 years projected in September 2015.