Pacific Gas and Electric Co. (PG&E) in early May announced it plans to run a 10-year study that will blend natural gas and green hydrogen in a standalone transmission system for potential use in storage, electric generation and vehicle fuel. 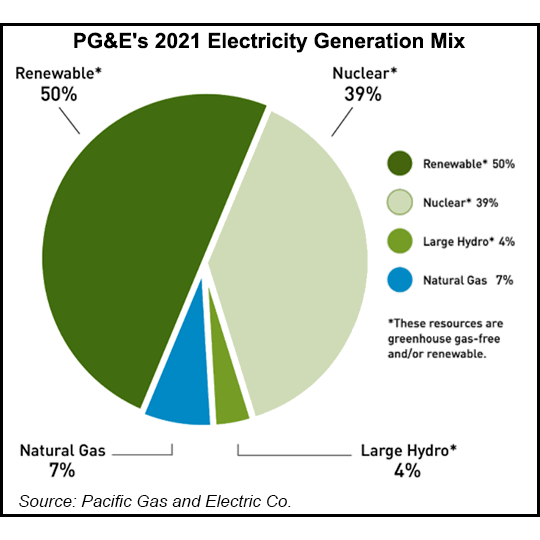 The project, known as Hydrogen to Infinity, will involve PG&E and several partners – the Northern California Power Agency (NCPA), Siemens Energy, the City of Lodi, GHD Inc., and the University of California at Riverside – testing different levels of hydrogen blends in a natural gas pipeline system independent from its current natural gas transmission system.

Analyses of the study will be conducted at a new 130-acre facility in Lodi, CA. The facility is adjacent to NCPA’s 300 MW Lodi Center power plant, which PG&E said will accept a hydrogen-natural gas blend to fuel its combined cycle gas turbines.

PG&E may also seek hydrogen’s viability in vehicle fueling stations. A nearby compressed natural gas fueling station may accept “natural gas once it has been separated from the hydrogen,” a spokesperson for PG&E told NGI.

Additionally, the San Francisco-based utility may consider hydrogen’s “potential use at ports in Northern California,” a PG&E spokesperson told NGI.

PG&E noted that it is considering using the Lodi facility as a site for a potential Northern California hydrogen hub.

A spokesperson for the utility told NGI that PG&E is coordinating with the California Governor’s Office to submit one state application for funding from the Department of Energy (DOE) regional hydrogen hub program.

“The plan is for the State of California to submit an application for all hydrogen efforts in Northern and Southern California,” the spokesperson said.

To date, four Rocky Mountain states and four Mid-Atlantic and New England states have said they would seek a portion of DOE’s $8 billion in federal funding to develop four regional hydrogen hubs.

The hydrogen hub program was established in the Infrastructure Investment and Jobs Act, enacted last November, as part of the Biden administration’s strategy to achieve a 100% clean electrical grid by 2035 and net-zero carbon emissions by 2050.

In September 2021, California Gov. Gavin Newsom signed into law Senate Bill (SB) 423, which seeks to accelerate the deployment of “firm zero-carbon resources” for electricity production. The bill would bolster SB 100, which the California legislature enacted in 2018. SB 100 calls for eliminating the use of fossil fuels, including natural gas, for electricity production by 2045.