As parts of California face wildfires and the persistence of extreme dry conditions, PG&E Corp. estimates that around 90% of its wildfire risk has been mitigated by technology and program enhancements. 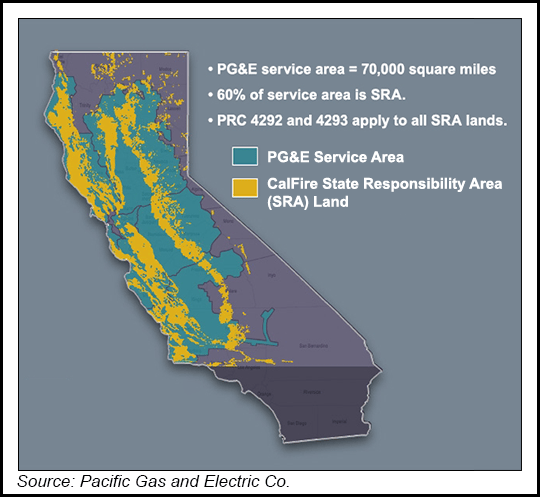 CEO Patricia Poppe said during a second quarter conference call that new safety settings for lines and vegetation control have helped increase safety and reliability in its most fire prone service areas of Northern California as another devastating fire season takes shape.

“We’re continuing to pursue opportunities to improve beyond the 90% risk mitigation with additional innovative technology solutions such as partial voltage smart meter alarms, and down conductor capability,” Poppe said.

The San Francisco-based combination utility has outlined capital spending of $53 billion over the next five years, compared to $35 billion between 2017 and 2021. One-quarter of the budget is earmarked for hardening initiatives like placing lines underground. The utility through July had placed more miles of line underground than it did during 2021.
“We anticipate that additional opportunities, including undergrounding, will provide us with greater long-term protection while reducing the customer impact,” Poppe said.

Mitigating wildfire risk has been a top priority as PG&E recovers from the fallout of several major wildfires in the past few years. PG&E sustained estimated losses of more than $1 billion collectively for the 2020 Zogg Fire and the Kincade Fire. It emerged from bankruptcy after a $58 billion reorganization plan last year. It was the company’s second bankruptcy after filing in 2001 in the fallout of the Enron Corp. collapse.

PG&E filed its final responses for its 2022 wildfire mitigation plan in late July. Poppe said the company anticipated a draft decision sometime before October. The company also disclosed it had no reported ignition events that impacted more than 100 acres so far in the year.

PG&E filed an electrical incident report in June in connection to an investigation of a wildfire dubbed the Old Fire. The blaze centered around the Old Soda Springs Road area northeast of Napa, which spread to 570 acres, but was not associated with any injuries or structural damage.

Poppe said the utility filed the report because its equipment was involved in the investigation. However, no available information from investigators or damage to the equipment suggests it was linked to the blaze.

Last week, the company shut down power to its lines in Mariposa County in an area currently engulfed by the Oak Fire. The California Department of Forestry and Fire Protection, known as Cal Fire, reported earlier this week that the blaze covered more than 19,000 acres and had destroyed at least 190 structures.

Poppe said the utility has not filed a report or been informed of a connection to the Oak Fire, as Cal Fire’s investigation continues.