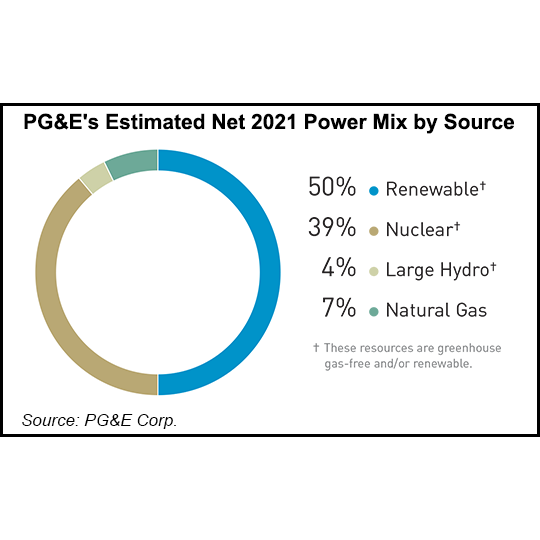 In the first quarter of 2021, the San Francisco-based utility submitted an internal review to the California Public Utilities Commission’s (CPUC) Safety and Enforcement Division (SED) in which it reported it had failed to demonstrate adequate cathodic protection (CP), a method used to control the corrosion of metal surfaces.

When CP areas have been found to have below-adequate levels of protection, PG&E’s utility standard requires that they must be restored within 15 months. PG&E incurred 311 CP violations, of which 127 had low reads for more than 24 months, according to the CPUC’s citation.

The CPUC announced it issued a $10,000 fine for each of the 127 long-standing violations, to be paid by PG&E’s shareholders to the state’s general fund.

“Safety remains our most important responsibility,” a PG&E spokesperson told NGI. “In 2021, we self-reported to the CPUC that a number of internal scheduling notifications relating to remediation work on cathodic protection for pipeline assets had been incorrectly canceled. The cancellations were primarily driven by a computer software error.”

Between March and June of 2021, the utility “also conducted a large-scale audit to identify all overdue work that may have been incorrectly canceled in the work management system. The work associated with the violations has been completed,” the spokesperson said.

Beginning June 24, PG&E has 30 days to appeal or pay the fine, according to the CPUC.

The nation’s largest utility has been the subject of several penalties in the last decade. In April, PG&E agreed to pay about $55 million to settle charges related to the 2019 Kincade and 2021 Dixie wildfires.

In January 2019, PG&E entered Chapter 11 bankruptcy after paying billions in settlements for the devastating wildfires in 2017 and 2018. The utility exited bankruptcy later that year and has remained in stage one of enhanced oversight enforcement by the CPUC to ensure PG&E’s diligence with wildfire mitigation efforts.

On a related CPUC regulatory matter, PG&E has received pushback from AARP, which lobbies for people 50 and older.

AARP said earlier this month that it has filed testimony with CPUC challenging a four-year rate plan submitted by PG&E.

PG&E said last year that about half of the rate increase would go toward vegetation management and other wildfire risk reduction measures.

The Wired Group concluded that the costs of some PG&E capital spending proposals for gas and electric infrastructure would outweigh benefits to customers, AARP said. The nonprofit said eliminating the “cost-ineffective and inappropriate spending” that it identified would bring down PG&E’s requested 2023-2026 rate increase 92% – from $3.76 billion to $280 million.

“It’s time for PG&E to live up to its responsibility to improve wildfire safety without placing an even heavier burden on its customers, who already pay some of the highest rates in the nation,” AARP’s California State Director Nancy McPherson said.

AARP also criticized PG&E’s request for CPUC to authorize $10 billion in spending to bury, or “underground,” 3,600 miles of power lines during the 2023-2026 time frame.

“Undergrounding is much more expensive than overhead lines, and given that high fire threat districts (HFTD) are largely rural, it is not uncommon” that such lines would serve just one customer per mile, AARP said.

The group panned undergrounding as “a poor economic choice, since safety could be improved in less costly ways.”

AARP said that it would cost $68,000 per rural HFTD customer on average to underground the first 10,000 miles of power lines in these districts, adding that another 15,000 miles of HFTD power lines would be buried as well.

“Such spending is not only economically irresponsible, it is also a type of capital spending, which allows PG&E to increase profits,” said AARP. “This means that PG&E has a financial incentive to choose this most expensive option, regardless of whether its customers benefit.”