An investigation by California Department of Forestry and Fire Protection (CalFIRE) has determined that Pacific Gas and Electric Co. (PG&E) is responsible for last July’s Dixie wildfire in Northern California. 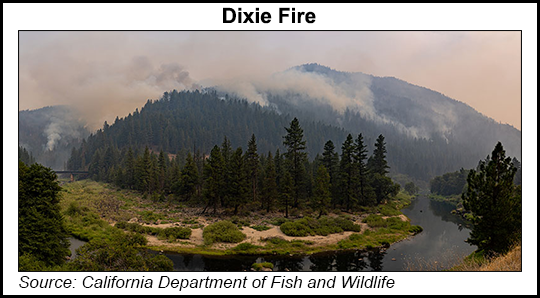 After “a meticulous and thorough investigation,” CalFIRE determined the Dixie Fire was caused by “a tree contacting electrical distribution lines” owned and operated by PG&E west of Cresta Dam.

The investigative report has been forwarded to the Butte County District Attorney’s Office.

In July, PG&E told California regulators that a blown fuse on its Bucks Creek 1101 12-kV overhead distribution circuit could have been responsible for the ignition. A PG&E field employee at the initial scene saw the fire grow from one or two acres to about 15 acres. The fire burned through 963,000 acres in Northern California, destroying more than 1,000 buildings.

PG&E’s equipment has been found to be the cause of numerous major wildfires that have plagued California for the past five years.

In December, PG&E agreed to a $125 million settlement with the California Public Utilities Commission over the utility’s role in igniting the 2019 Kincade wildfire in the Northern California wine country. A CalFIRE investigation found the blaze was caused by a PG&E transmission line. The fire burned more than 75,000 acres of land, destroyed 374 structures, damaged 60 buildings, and injured four firefighters before it was fully contained two weeks after it began.

The company has estimated losses of more than $1 billion collectively for the 2020 Zogg Fire and the Kincade Fire, and emerged from bankruptcy after a $58 billion reorganization plan last year.

“Regardless of today’s finding, we will continue to be tenacious in our efforts to stop fire ignitions from our equipment and to ensure that everyone and everything is always safe,” PG&E said of the CalFIRE investigation.