A Pacific Gas and Electric Co. (PG&E) transmission line in the Northern California wine country caused the 77,000-acre Kincade Fire last year, according to an investigation by the California Department of Forestry and Fire Protection. 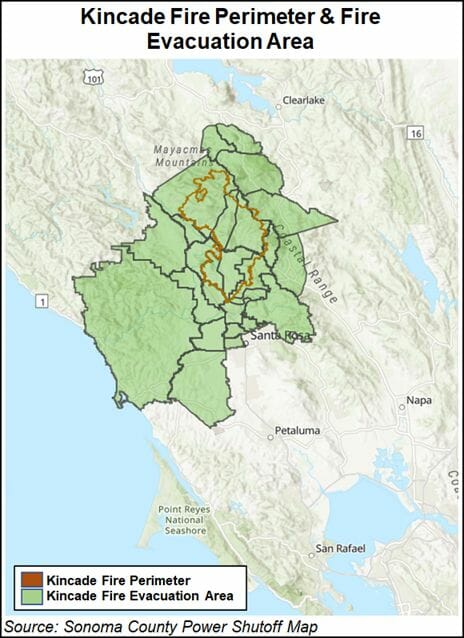 The Kincade blaze was caused by PG&E’s electrical transmission lines northeast of Geyserville in Sonoma County, according to the investigation.

Last October, PG&E said field workers “became aware of a transmission level outage on Geysers No. 9 Lakeville 230kV line when the line relayed and did not reclose, de-energizing the line.”

At the time, PG&E reported the preliminary information to the California Public Utilities Commission. PG&E said before the fire ignited, the utility called a public safety power shutoff affecting more than 27,000 customers, but it only involved distribution power lines.

Late last month PG&E won court approval of its $58 billion reorganization plan that included $13.5 billion in payouts to 2017 and 2018 Northern California wildfire victims. Settlements for fires in 2019 in which PG&E was involved were not included.

PG&E spokesperson Ari Vanrenen said the utility planned to review the latest report. About 374 structures were destroyed before the fire was contained in early November.

“We appreciate all the heroic efforts of the first responders who fought the 2019 fire, helped local citizens evacuate, and ensuring no one perished in the fire,” he said.