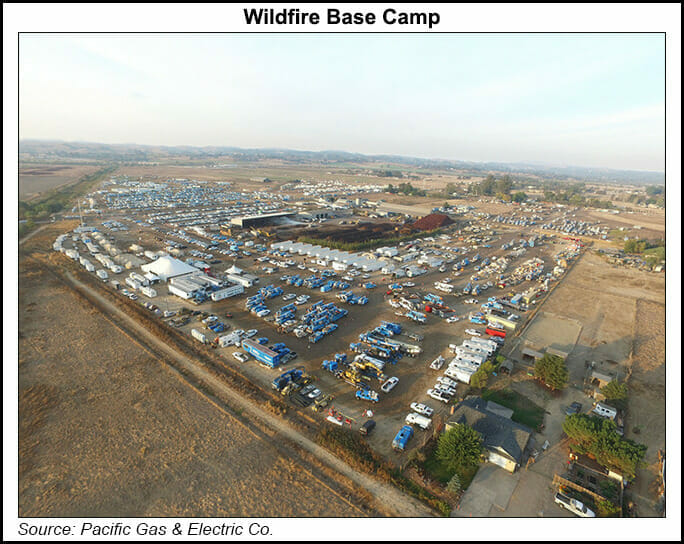 Under its more closely scrutinized status, PG&E must submit to the CPUC a corrective action plan and progress reports every 90 days. Depending on its fire mitigation work this year, PG&E could either be removed from the enhanced regulation or placed under even stricter oversight, the CPUC noted in its ruling.

PG&E failed to sufficiently prioritize clearing vegetation on its highest-risk power lines as part of its wildfire mitigation work last year, the CPUC said, while ordering PG&E to take corrective actions to ensure it improves its safety performance, something the combination utility contends it is laser-focused on.

Utility spokesperson James Noonan said in response to the regulators and the CPUC’s Wildfire Safety Divison feedback that PG&E has already implemented significant improvements to its Enhanced Vegetation Management program and will continue to do so as outlined in a 2021 Wildfire Mitigation Plan.

“It is in all of our best interests to work together to improve our safety performance for the benefit of our customers and the communities we are privileged to serve,” Noonan said.

The CPUC’s action was based on findings in an audit report issued by the wildfire safety unit regarding PG&E’s enhanced vegetation management activities, concluding that in 2020 PG&E failed to clear hazardous vegetation from power lines that posed the highest wildfire risks, based on the company’s own risk rankings. Instead, PG&E allegedly worked on lower-risk lines.

PG&E was put on notice last year in November in a letter from CPUC President Marybel Batjer outlining concerns that the utility might be “deficient in its responsibility to safely manage wildfire risks posed by trees and other vegetation.” Batjer said the latest action confirms that “PG&E failed to make sufficient risk-driven investments in its vegetation management practices.”

The five-member CPUC, therefore, placed PG&E into the “first step of an enhanced oversight and enforcement process.”

“The corrective action plan is intended to create a path to help ensure that in 2021 PG&E is prioritizing its enhanced vegetation management based on wildfire risk throughout its electric system,” said CPUC spokesperson Julie Hall, noting the CPUC safety staff will keep tighter oversight on the San Francisco-based utility giant.

The CPUC’s enhanced oversight and enforcement process for PG&E has six steps that are triggered by specific findings or events. “The process was imposed by the CPUC as a condition of approving PG&E’s plan for exiting bankruptcy in May 2020, and provides a clear roadmap for how the CPUC closely monitors PG&E’s performance,” Hall said.

Earlier this year, PG&E CEO Patricia Poppe said the utility’s mitigation plans were moving to risk-based from activity-based, so they would address the highest risk areas in its service territory with an “enhanced, predictive” model using state-of-the-art technology.

Subsequently, in an attempt to avoid a repeat of last summer’s rolling blackouts, the CPUC proposed a set of actions by the power utilities to add grid safety and reliability.