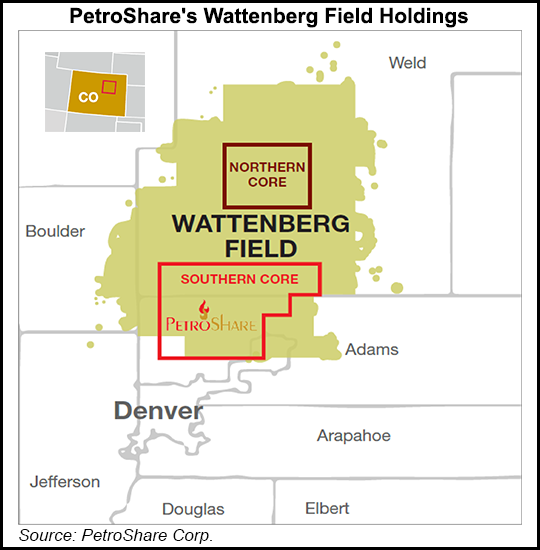 The Englewood, CO-based independent, whose exploration and production (E&P) operations are concentrated in the Wattenberg field within Weld and Adams counties, filed voluntary petitions to reorganize under Chapter 11 in the U.S. Bankruptcy Court for the District of Colorado.

“The new Colorado regulatory environment governing oil and gas permitting in the state and the associated uncertainty on rulemaking has made it very difficult to attract new capital investment in this sector,” CEO Stephen J. Foley said. “We are filing a voluntary Chapter 11 petition in order to proceed with the orderly recapitalization or sale of some or all of the company’s assets and to continue to pay active vendors, suppliers and other ongoing business expenses without interruption during the process.

“Unfortunately, the collateral damage of Senate Bill 181 has manifested itself in the slowdown of the state’s oil and gas sector, resulting in job losses.”

Colorado regulators last month issued the first rules under the omnibus bill, which was signed into law earlier this year. The legislation aims to make public health and the environment priorities in the oil and gas development permitting process, along with revamping the Colorado Oil and Gas Conservation Commission.

Colorado’s oil and gas producing counties are coping with the legislation in different ways. Weld County, where most oil and gas development is underway, has been a staunch supporter of the industry, while nearby Adams is working to make its regulations more stringent.

“We believe the Colorado oil and gas industry can work with all stakeholders in the implementation of the new regulatory rules,” PetroShare President Frederick J. Witsell said. “However, in spite of our quality asset base, our virtually zero-emissions facility design and our Shook pad production trending above our type curves, oil price volatility coupled with the delay in the new rulemaking process has created uncertainty in the current investment environment in Colorado oil and gas development.”

PetroShare plans to recapitalize the company, which could include selling some or all of its assets via the court-supervised process “designed to achieve the highest and best price for those assets,” management said.

The company said its cash position remains adequate to continue existing operations as a debtor-in-possession, which would allow it to maintain most of its staff and equipment throughout the recapitalization and/or sale process.

PetroShare said it plans to “work closely with its suppliers and partners in an effort to ensure that it meets ongoing obligations, and that business continues uninterrupted during the sales process.”

PetroShare has about 10,000 net acres, including mineral rights-only acreage, in northeastern Colorado and has concentrated its efforts in an area it calls the Southern Core, where it has most of its leasehold.

As of mid-August, around 26 North American E&Ps had filed for bankruptcy, according to Haynes & Boone LLP, which tracks filings. That number compares with 28 total filings last year and 24 total in 2017.