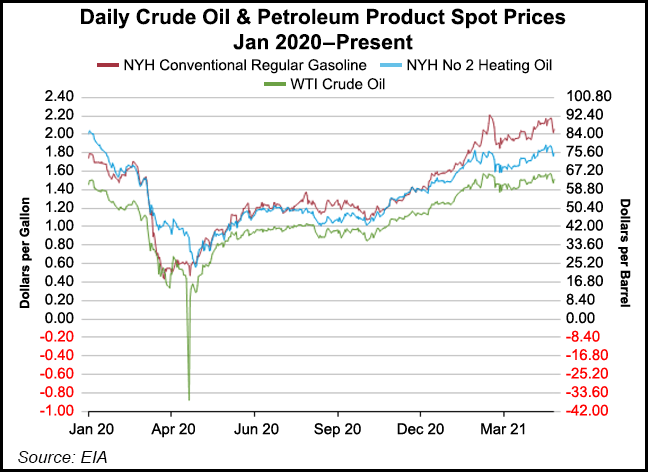 EIA said in its Weekly Petroleum Status Report (WPSR) that overall petroleum demand for the period ended May 21 rose 3.5% week/week after jumping 10% a week earlier, lifted by mounting demand for gasoline and a surge in consumption of jet fuel. Demand for gasoline last week increased 3% from the prior week, while jet fuel demand bounced 18% higher.

U.S. oil refinery inputs averaged 15.2 million b/d last week. That was 123,000 b/d more than the prior week. Refineries operated at 87% of their operable capacity last week, on par with the prior week and up substantially from 71% a year earlier.

The gains come as coronavirus vaccination programs advance – about half of American adults are now fully inoculated, according to federal data – and travel restrictions ease.

Total petroleum products supplied – EIA’s terminology for demand – averaged 19.1 million b/d over the past four weeks, up 18% from the same period last year. In that span, gasoline consumption increased 29% year/year and demand for jet fuel more than doubled, according to the WSPR.

Demand is also expected to mount globally over the summer months.