Reflecting the continuing surge in Permian Basin drilling, the New Mexico State Land Office (SLO) reported that it is nearing a record in oil and natural gas lease sale revenues, following the completion of a March auction that netted nearly $1.5 million. 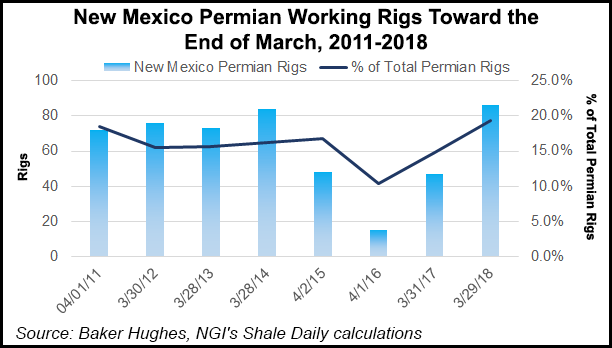 To date in fiscal year (FY) 2018, the SLO, which manages nearly two million acres, has collected $95 million in lease sale earnings, according to State Land Commissioner Aubrey Dunn. New Mexico has leapfrogged California and Alaska to become the third leading state for oil production, behind Texas and North Dakota.

Dunn said the state’s oil and gas revenues should exceed the record $102 million garnered in FY2011-12. In the latest sale, 15 tracts covering 2,807 acres of state trust lands in Lea and Sandoval counties drew 20 bidders from eight states. The lease sales are conducted online on the third Tuesday of every month.

While revenues are soaring, the state is taking action to ensure it has adequate fresh water supplies. Revamped rules are in place related to horizontal drilling and produced water disposal.

Martin said he has not seen an increase in environmental concerns related to the increased drilling in the Permian, although groups and activists “are certainly aware of the industry activity and very energetic in their own activities.”

Last year, the state restricted the use of fresh water from the Ogallala aquifer for oil and gas production. That followed earlier action to protect fresh water supplies on all state trust lands under SLO’s jurisdiction. The oil and gas industry embraced the state actions, a spokesperson told NGI‘s Shale Daily.

Midland, TX-based Remnant Oil Co. LLC has become something of a poster child for state-industry cooperation related to Ogallala aquifer water. Late last year Dunn said Remnant was working with neighboring Permian operators to take their produced water at a reduced rate from what they were paying for disposal to get additional water supplies for its operations.

SLO and state energy regulators meet regularly to discuss rules regarding exploration and development, Martin said. “Because of these cooperative efforts, we are satisfied that the state is taking the steps necessary to protect New Mexico’s water resources while allowing oil and gas operations to proceed in an environmentally friendly manner,” he said.