The Permian Basin was the focal point of U.S. onshore drilling activity during the week ended Friday (Nov. 19), spurring a seven-rig increase in the combined domestic count, which finished at 563, according to the latest numbers from Baker Hughes Co. (BKR). 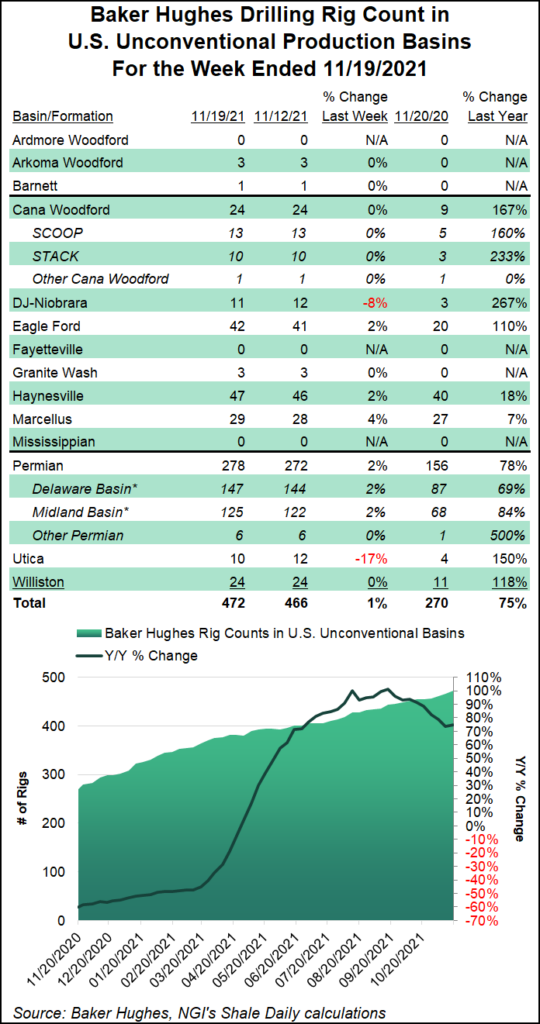 All of the net gains for the week in the United States occurred in the oil patch; the U.S. natural gas rig count finished flat at 102. The Gulf of Mexico tally was also unchanged for the week at 15, according to the BKR numbers, which are partly based on data from Enverus.

The United States finished the week with roughly 250 more active rigs than the 310 units running in the year-earlier period.

The Canadian rig count slid one unit to 167 for the period, with a net decline of two natural gas-directed units offsetting the addition of one oil-directed rig.

Broken down by major play, the Permian led the way with a net increase of six rigs, growing its total to 278, up from 156 in the year-ago period. The Utica Shale, meanwhile, saw a net decline of two rigs for the week.

Elsewhere among plays, the Eagle Ford, Haynesville and Marcellus shales each added a rig, while one rig exited in the Denver Julesburg-Niobrara, according to BKR.

In the state-by-state breakdown, Texas posted a net increase of seven rigs, while New Mexico added two to its total. One rig was added in West Virginia for the week, while Ohio posted a net decline of two rigs.

The call on oil and gas rigs is expected to climb faster than Helmerich & Payne Inc . (H&P) can accommodate, CEO John Lindsay said during a recent conference call, adding that the oilfield services provider “will have to reactivate more long-idled rigs to satisfy demand.”

“As we head toward 2022, we expect that the demand for H&P’s drilling solutions will continue to improve, and capital discipline, along with the help of strong commodity prices, will strengthen the industry,” Lindsay said.

The global energy watchdog said it now expects crude output to jump by 1.5 million b/d through the rest of this year, with the United States joining Saudi Arabia and Russia as a key driver of increases. This could align supply with demand, even as the latter continues to rise amid a global travel recovery, according to the agency.