Permian pure-play operator Parsley Energy Inc. caught the market’s attention Friday after launching an initial public offering (IPO) in which it sold about six million more shares than anticipated, exceeding its offering price and sending the stock soaring in its first day of trading on the New York Stock Exchange (NYSE). 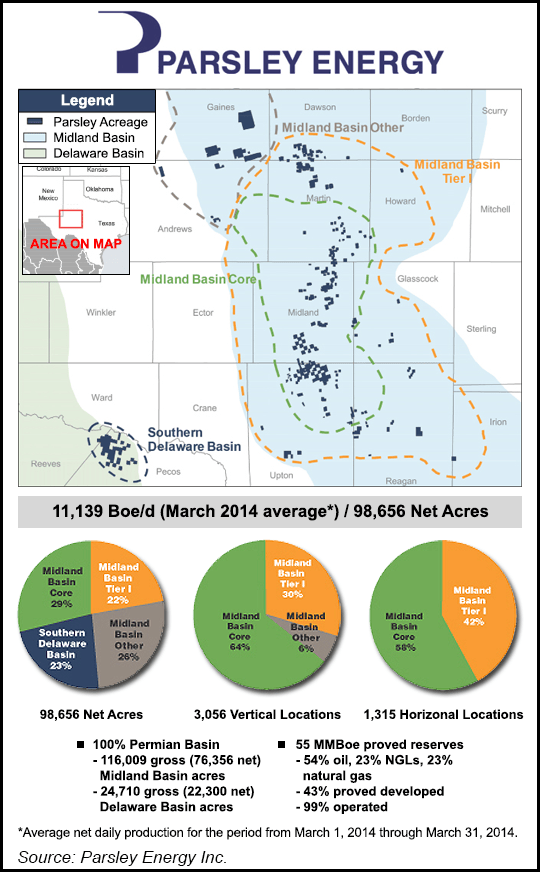 In regulatory filings, the Midland, TX-based company had hoped to sell 44 million shares at a price of $15-18 each, but even before it had offered additional shares to its underwriters, the company sold 50 million shares for $18.50 each to raise $925 million. Its stock climbed throughout the day to close at $22.20/share.

All of Parsley’s leasehold is located in the Permian Basin of West Texas, where a renaissance has been driven by multiple pay horizons and the oily record-setting success of horizontal drillers has lately created a frenzy over results (see Shale Daily, May 15; May 7; April 16).

Another cue for investors came with Parsley’s primary locations in the Permian’s prolific Midland and Delaware subbasins, where other operators have reported increasing success by targeting the Spraberry, Wolfberry and Wolfcamp shale formations.

In an S-1 filed in April with the U.S. Securities and Exchange Commission ahead of its IPO, Parsley said it has acquired 98,656 net acres in the Permian, 76,356 of which are located in the Midland Basin across a stacked pay fairway that includes the Spraberry, Wolfberry and Wolftoka trends.

Parsley’s market-anointed peers, such as Wolfberry-focused Athlon and Permian pure-play operator DiamondBack Energy Inc. also likely helped to lift the company’s IPO. DiamondBack, which went public in October 2012, got its start in 2007 drilling conventional wells across more than 4,000 acres in the basin. DiamondBack’s stock debuted at a price similar to Parsley’s, fetching $17.50/share when it launched.

Parsley began its operations in August 2008 with the acquisition of rights to producing wells in the Midland Basin from Joe Parsley, who co-founded the Parker and Parsley Petroleum Co., which eventually became onshore heavyweight Pioneer Natural Resources Co.

Parsley said in its prospectus that it has mostly drilled vertical wells to date. In all, the company has interests in 247 net wells in West Texas.

At the end of the first quarter, Parsley’s average daily production was 11,139 boe/d. The company said in April that it was operating nine vertical drilling rigs and one horizontal rig. With the proceeds of its IPO, the company plans to significantly ramp-up its horizontal drilling program to target stacked pay zones. It said it expects to operate between seven and eight vertical rigs and five horizontal rigs by the first quarter of 2015.