A surge in oil-directed drilling led by the Permian Basin sent the U.S. rig count 13 units higher to 373 for the week ending Friday (Jan. 15), according to data published by Baker Hughes Co. (BKR). 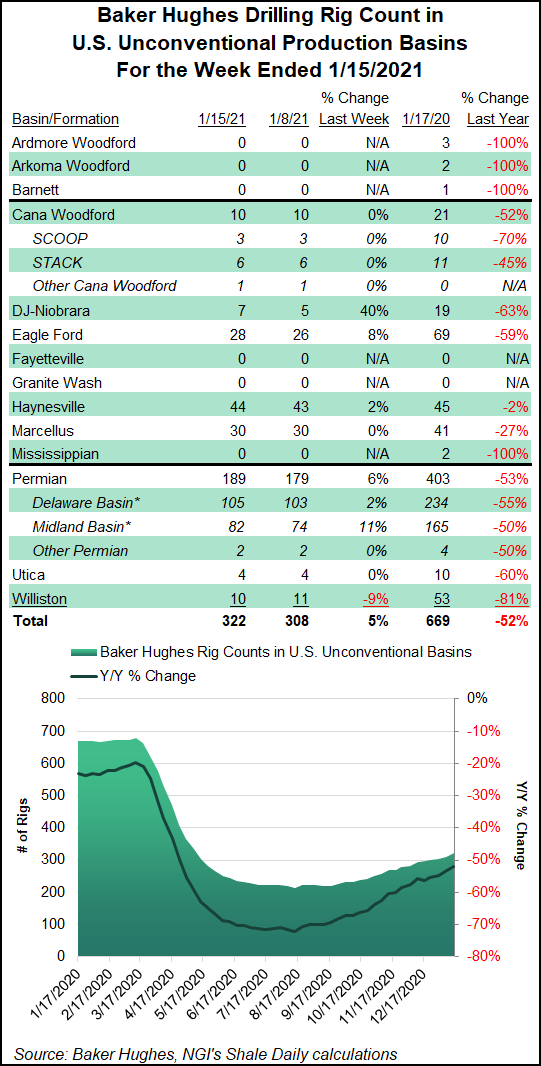 The latest BKR numbers, which are based on data provided in part by Enverus, showed an increase of 12 oil-directed rigs in the United States for the week, along with a net gain of one natural gas-directed unit. The combined U.S. count ended the period 423 units shy of its year-ago total of 796.

Land drilling increased by 13, while one rig was added in inland waters. The Gulf of Mexico dropped one rig to fall to 16, versus 20 in the year-ago period. Horizontal units increased by 12, while one vertical unit was added during the week, according to BKR.

The Canadian rig count surged 44 units higher to finish at 161, down from 244 at this time last year. Changes included an increase of 37 oil-directed units, along with seven gas-directed.

The combined North American rig count ended the week at 534, versus 1,040 in the year-ago period.

Broken down by major play, the Permian by far saw the largest net gain for the week, adding 10 units to up its total to 189. That’s still down more than 200 units from the 403 rigs active in the play at this time a year ago.

Elsewhere among plays, the Denver Julesburg-Niobrara and the Eagle Ford Shale each added two rigs to their respective totals. The Haynesville Shale added one rig, while the Williston Basin saw a net decrease of one rig.

As oil and natural gas prices are predicted to rise in 2021, exploration operators are ready to get back to business onshore and offshore, with international players likely to shell out more funds this year than their Lower 48 counterparts.

Energy analysts in recent weeks have begun offering their takes on the likely pace of activity and potential capital expenditures for the exploration and production (E&P) and oilfield services sectors.

Evercore ISI recently completed a comprehensive analysis of about 250 of the world’s top operators using a combination of internal documents and conversations with various players.

“For the first time since 2018, E&P spending is poised to increase both in North America and internationally with almost all geographic regions anticipating growth,” said the Evercore analysts.