More natural gas processing capacity and pipeline takeaway are underway in the Permian Basin under an infrastructure agreement between Crestwood Equity Partners LP and First Reserve. 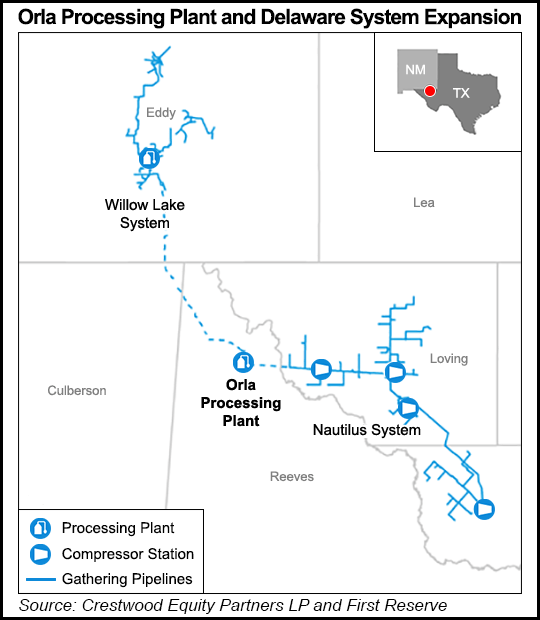 The partners, which joint ventured (JV) in 2015, own Crestwood Permian Basin Holdings LLC to develop, own and operate midstream infrastructure in the Delaware sub-basin. Under a two-part agreement announced Wednesday, the partners said they would pull into the JV Crestwood’s remaining Delaware asset, the Willow Lake natural gas gathering and processing system in Eddy County, NM.

The buildout “is an important step in Crestwood’s strategy of expanding and integrating our Delaware Basin footprint to create a super system that spans over two million acres located in the heart of the most active development counties in the Delaware Basin,” said Crestwood CEO Robert G. Phillips.

Orla is being designed to attract processing volumes not only in Eddy County and the Orla Express Pipeline but also the Nautilus system, a West Texas gas gathering system underway in Loving and Ward counties for Royal Dutch Shell plc subsidiary SWEPI LP.

Once the Orla project is completed, estimated to cost around $170 million, the JV’s integrated gathering and processing footprint would span more than 100 miles and service customers across in New Mexico’s Eddy and Lea counties and in the West Texas counties of Loving, Ward, Reeves and Culberson.

“Dropping the Willow Lake assets into our joint venture is consistent with our strategy of prudently pursuing organic growth opportunities while managing risk and maintaining balance sheet strength,” Phillips said. “As we continue to build out a large integrated platform in the Delaware Basin, Crestwood and First Reserve are aggressively evaluating new organic expansion opportunities for existing and new customers that will further expand our Permian presence and drive meaningful cash flow growth beginning in 2018.”

The Permian JV is considered a key investment for private equity giant First Reserve, which focuses primarily on the energy sector.

“This project, which expands the scope and adds processing capabilities to our joint venture, creates a Delaware Basin infrastructure footprint that we believe is ideally positioned to provide superior netbacks to our customers,” said First Reserve Managing Director Gary Reaves. “It also will allow us to capitalize on incremental organic growth opportunities over the next 12 months in the Delaware Basin which, in our view, is currently the most attractive onshore resource play in the United States.”

In connection with the expansion, Crestwood’s Willow Lake contribution is valued at $151 million, which would be credited as part of Crestwood’s capital requirements to the JV. Capital requirements thereafter are expected to be funded 50-50 by the JV. Crestwood would continue to receive all of the available cash flow generated by the Willow Lake assets until the Orla plant in-service date or by June 30, 2018, at which time the parties each would receive half of the distributions.

Once the transaction is completed, the JV would own all of Crestwood’s Delaware assets, which include the Nautilus gas gathering system and the Willow Lake system, including the announced gas processing plant and Orla Express Pipeline. Once the Orla plant is placed into service, the JV’s asset footprint would include more than 200,000 acres of dedication, 255 MMcf/d of processing capacity, 300 MMcf/d of gathering capacity and 360-plus miles of pipe.