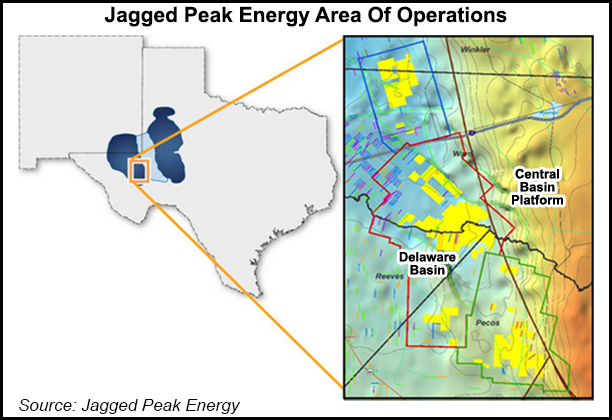 On pipeline curtailment notices related to Harvey, the company shut-in some wells, including four that remained off-line so that the company could install electric submersible pumps (ESP) ahead of schedule. All of the wells temporarily curtailed because of the hurricane now are producing.

Production from two nonoperated wells also was delayed to September from July, and scheduling conflicts delayed completing two other wells.

“During the quarter, industry infrastructure impacts from Hurricane Harvey caused a portion of our wells to be shut-in for a short period of time,” CEO Joseph N. Jaggers said. “We took this opportunity to install ESPs on certain of the shut-in wells which are now back on production.

“In addition, we experienced timing delays related to both two nonoperated wells and two operated wells, which delayed the early-period, high-production phase by several weeks. These wells are now online and producing in line with our expectations.”

Harvey had forced exploration and production companies working in the Eagle Ford Shale in South Texas to curtail some operations, and production cutbacks have been cited by a few. However, Jagged Peak is one of the first Permian-based explorers to publicly cite the storm for reducing output.

Jagged Peak, which is concentrating in the southern Delaware sub-basin, currently is deploying three completion fleets, a number it expects to operate through at least the rest of the year.

“For the full year, we continue to expect to spud 54-58 operated and to complete 50-55 operated wells, with timing dictated by optimal development of our assets including multiple well pads and multiple zone completions,” Jaggers said.

Wells Fargo Securities LLC analysts said the news was not entirely unexpected as the company had guided down its third quarter completion count to 11-13 from 13-15 in an investor presentation released earlier this month.

“Given the relative size of Jagged Peak’s production base with a steep growth profile, operational delays in the field, while not uncommon, have somewhat more pronounced impact at this stage for the company, though something that should smooth out over time as the production base grows,” said analysts.

“With the heightened level of activity in the Permian industrywide, we don’t believe others will be immune to similar completion delays which are likely to be a broader industry trend as we head into 3Q2017 earnings due to the tight service environment in the Permian.”