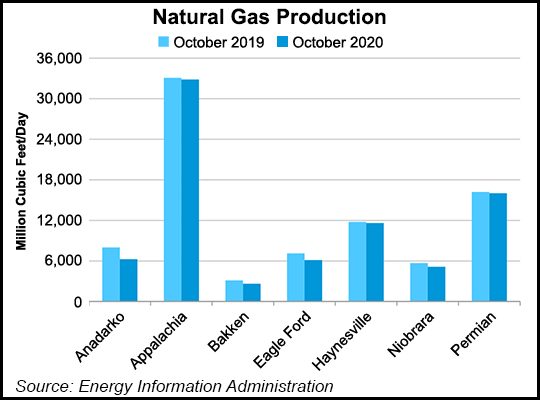 The Permian Basin is the only one of the seven major producing areas of the United States forecast to see an increase in natural gas and oil output in October over September, the Energy Information Administration said Monday.

In the monthly Drilling Productivity Report, EIA researchers estimated total oil production from the seven most prolific basins in the United States would decline by 68,000 b/d month/month to total 7.64 million b/d.

Natural gas production overall is set to decline by 428 MMcf/d to average almost 80.60 Bcf/d, according to the DPR.

However, in the Permian, which saw the fastest rig slide in the country as Covid-19 scrambled prices, is forecast to see an uptick next month.

In addition to the Permian, the DPR estimates monthly production from the Anadarko and Appalachian basins, the Bakken, Eagle Ford, Haynesville shales, and the Niobrara formation. Last month production declined across the board in all seven basins.

Drilling data through August was used for the latest DPR, with projected production through October. The forecasts are based on the total number of drilling rigs in operation, along with estimates of drilling productivity and estimated changes in production from existing oil and gas wells.

In the Eagle Ford, researchers estimated oil production in October would be 28,000 b/d lower than in September at about 1.13 million b/d. Gas production was seen declining by 79 MMcf/d to 6.12 Bcf/d. In the gassy Haynesville Shale, EIA expects flat oil production into October at 36,000 b/d. Gas output, meanwhile, is forecast to decline by 58 MMcf/d month/month to 11.62 Bcf/d.
The Niobrara also is forecast to see oil production fall, down by 23,000 b/d in October from September to total 605,000 b/d. Gas output should decline by 74 MMcf/d to total 5.13 Bcf/d.