Worldwide energy demand has plummeted on the combined effects of Covid-19 and the ongoing price war, but natural gas flaring levels in the Permian Basin are down and should continue to fall through the rest of the year, according to Rystad Energy. 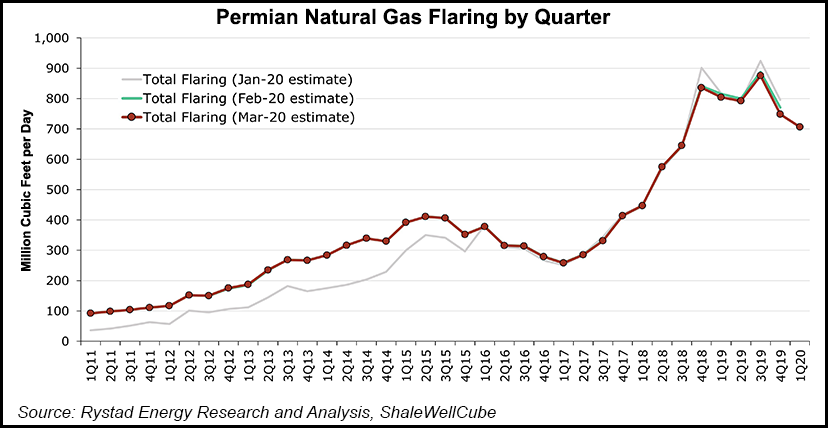 Rystad’s preliminary estimate for levels in the first three months of 2020 indicate an emerging downward trend in gas flaring to 700 MMcf/d, with around 550 MMcf/d flared at the wellhead, the lowest quarterly rate since 3Q2018.

“The basin-wide wellhead flaring ratio fell below 3.5% in the first quarter of 2020, and additional improvements are expected to materialize throughout the remainder of 2020,” said Rystad’s Artem Abramov, head of shale research. “This is especially true now, in this period of collapsing basin-wide completion activity amid an oil price crash and prolonged price weakness.”

Wellhead flaring in the Permian accounts for more than 70% of total flaring since the beginning of last year, analysts noted.

The Permian Delaware formation in West Texas is the largest contributor to total flaring, with close to 300 MMcf/d in the first quarter, driven by activity in Apache Corp.’s Alpine High play.

However, as gross gas production in the West Texas Delaware sub-basin has continued to increase, flaring intensity, i.e. the ratio of flared gas to total gas production, has declined substantially to around 4-4.7% in the last six months from a peak of 5.8% in 4Q2017.

In the Delaware sub-basin of New Mexico, “things are looking even better as the period of flaring intensity degradation seen in 2017 to 2018 is now in the past,” according to the analysis. The New Mexico Delaware “has recently seen its flaring ratio significantly improve, declining from 4.7% in the fourth quarter of 2018 to 2.7% in the last six months.”

The flaring ratio in the Midland sub-basin of West Texas also has begun to improve “and quite dramatically, after a period of several unplanned gas plant outages throughout the fourth quarter of 2018 and 2019.”

Rystad estimated that in 1Q2020, only 3.1% of gas was flared in the northern portion of the Midland, where there is substantial infrastructure, “closer to the pre-outage flaring intensity observed from 2015-2017.”

During the industry downturn between 2015 and 2016, Permian drilling activity still remained robust. Even so, wellhead flaring declined by more than one-third (35%) between early 2015 and early 2017, according to Rystad.

In this downturn, however, the Permian is facing a “rapid deceleration” as operators balance declining operational cash flow and reduced capital expenditures.

“Therefore, we expect a quick slowdown in total wellhead gas flaring throughout the remainder of this year of around 40%, from 550 MMcf/d to 330 MMcf/d,” analysts said.

Even without the potential shut-ins expected in oil-heavy plays like the Permian, oil production should begin declining, according to Rystad.

Flaring would decline more quickly because of its “strong correlation with new well counts.” All flaring and flaring driven emission intensity metrics should “materially improve” for Permian exploration and production (E&P) companies this year.

From the final three months of 2018 until the end of June 2019, Permian wellhead flaring was generating 22-26 pounds of carbon dioxide equivalent (CO2e) for each barrel of oil production, according to Rystad.

“In the last six months, flaring driven CO2 intensity has already dropped” to around 18-20 pounds/bbl. Emission intensity is forecast to decline to 11-13 CO2e/bbl as soon as 4Q2020.

“Such a low level of flaring has not been seen in the Permian since 2012,” Abramov said. “While the downturn introduces severe challenges for the overall economics of Permian producers, achieving outstanding emissions targets is at least one bright spot.”

E&Ps working in the Permian have been working to reduce flaring levels across the basin through various efforts. The recently launched Texas Methane and Flaring Coalition, made up of about 40 state operators and industry groups, is working to develop opportunities and recommendations to minimize flaring.