Amid large gains in the Permian Basin and the Marcellus Shale, the U.S. rig count surged 9 units higher to 360 for the period ending Friday (Jan. 8), according to the latest weekly numbers published Friday by oilfield services provider Baker Hughes Co. (BKR). 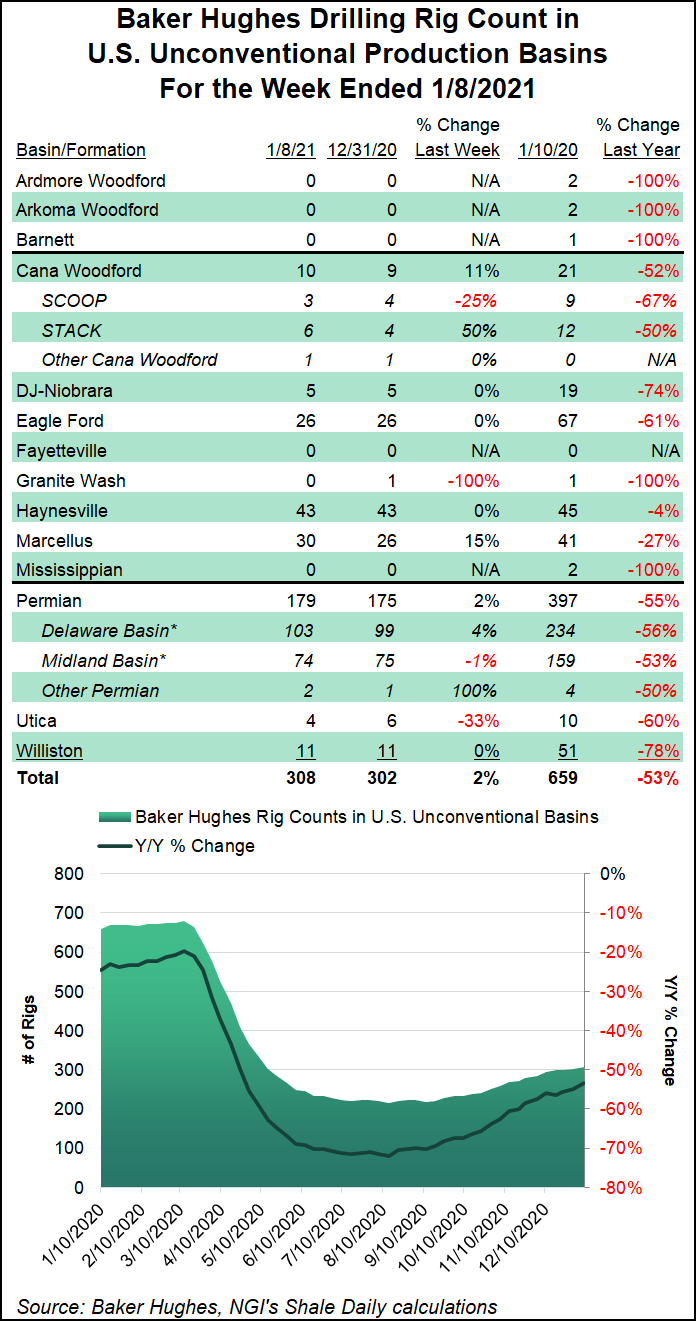 The rise in domestic drilling included an increase of eight oil-directed rigs, along with one natural gas-directed unit. The combined U.S. count ended the week 421 rigs behind the 781 rigs active a year ago, according to the BKR numbers, which are based on data provided in part by Enverus.

Land drilling increased by nine rigs week/week, while the Gulf of Mexico held steady at 17 rigs, down from 21 a year ago. Horizontal units increased by seven, while one directional unit and one vertical unit were also added.

The combined North American rig count ended the week at 477, versus 984 in the year-ago period.

Also among plays, the Cana Woodford added one rig for the week, while the Utica Shale dropped two rigs and the Granite Wash declined by one.

Among states, New Mexico led with an increase of four rigs on the week, while Pennsylvania added two and Alaska, California, Oklahoma and West Virginia each added one. Ohio posted a net decrease of one rig for the period, BKR data show.

News from Saudi Arabia early in the week provided oil markets with an injection of optimism, as the leader of the Organization of the Petroleum Exporting Countries revealed plans to cut oil production by 1 million b/d in February and March.

“If there is one way to describe what its voluntary cut means for the market, ‘happy hour’ is a pretty fitting term,” said Rystad Energy analyst Bjornar Tonhaugen. “They say there is no such thing as a free meal, but it’s difficult to see how a beast of a 1 million b/d cut is justified behind closed Saudi strategist doors.”

Still, U.S. energy executives remain wary about the outlook for the oil and natural gas markets this year, and are relying on moderate commodity prices as they finesse their 2021 capital spending plans, according to the latest quarterly survey conducted by the Federal Reserve Bank of Dallas.

“The latest survey results show some signs of improvement in the oil and gas sector,” said Michael Plante, senior research economist for the bank. “Business activity levels rose for the first time in a year, and firms became more optimistic about the outlook. Employment-related indicators fell again this quarter but at a more moderate pace than in previous quarters.”