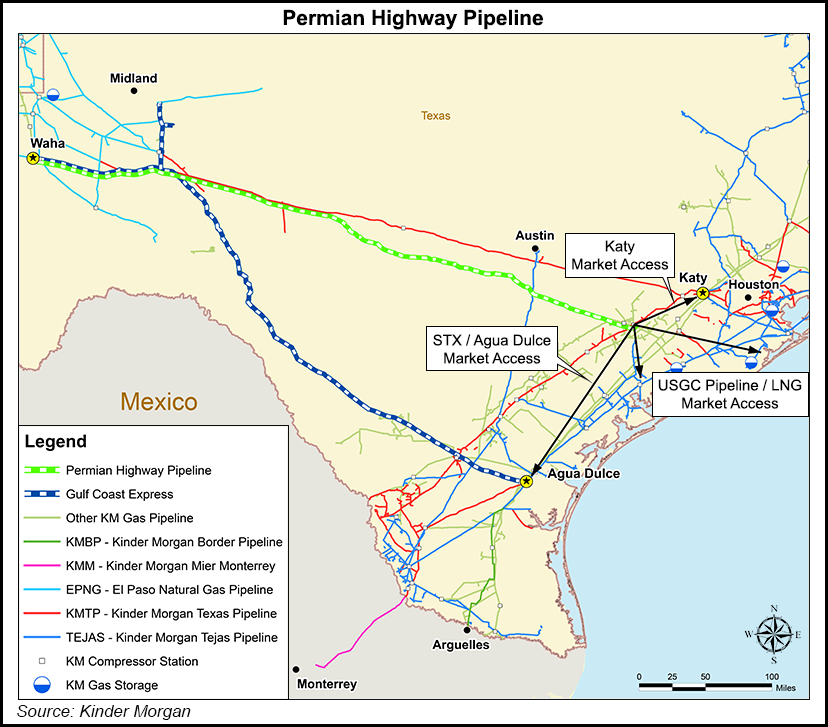 In an opinion piece published last week in the Houston Chronicle, CEO Steven Kean said management had determined the “best option” for the 42-inch diameter, 430-mile system would be a two-mile reroute around the Blanco River.

Kinder is facing multiple challenges to PHP. In July management indicated a reroute was underway. At that time PHP was about 80% mechanically complete, with mainline compression 97% complete.

PHP, which has faced pushback from landowners and city/county authorities in the iconic region better known as the Hill Country, has undertaken measures to avoid impacting U.S. waterways and to reduce the number of crossings. Opposition grew in late March following an incident that caused a 36,000 gallon drilling fluid spill east of the town Blanco.

Blanco, about halfway between Austin and San Antonio, is a tourist mecca known for two swimming areas in the river, which were created by dams. The Blanco also is stocked with abundant rainbow trout provided by the Texas Parks and Wildlife Department.

After the drilling incident, Kinder management began “working to make it right with the affected community immediately after it occurred,” Kean said. “Especially in times like these, it is important to focus on facts and not fear…

“Those facts bear out what we all know: landowners in Texas and across America have long lived in safe proximity to pipelines, enjoying the benefits of both affordable energy and a clean environment.”

After working on alternatives with regional authorities, the Railroad Commission of Texas and the U.S. Army Corps of Engineers, Kinder management determined circumventing the Blanco River would be the best option. The redesign would not require any deep drilling, according to Kean.

“The project is still expected to be placed in service in early 2021,” spokesperson Katherine Hill told NGI on Monday.

The Sierra Club said the reroute was not enough.

“After multiple accidents and spills, Kinder Morgan is picking up and trying to build along a new route, leaving an enormous amount of damage in its wake and putting a whole new group of landowners at risk,” said Sierra Club’s Roddy Hughes, senior campaign representative. “The only responsible path forward is for Kinder Morgan to shut down construction of this destructive pipeline once and for all.”

Meanwhile, the pipeline operator on Tuesday was dealing with a natural gas pipeline incident in West Texas on the El Paso Natural Gas Co. LLC system, EPNG. At 9:40 a.m. CT, natural gas was released and a fire was reported on an EPNG transmission line near Midland.

“The company isolated the impacted line segment, mobilized resources and is working with local emergency responders, including the Midland Fire Department,” spokesperson Lexey Long told NGI. The fire was extinguished, and no injuries were reported.

An investigation is planned, and Kinder said it was working with customers on any impacts to service.