Natural Gas production and prices in Pennsylvania both rebounded sharply during the first quarter after a pandemic-induced slump in 2020, according to a new report by the state’s Independent Fiscal Office (IFO). 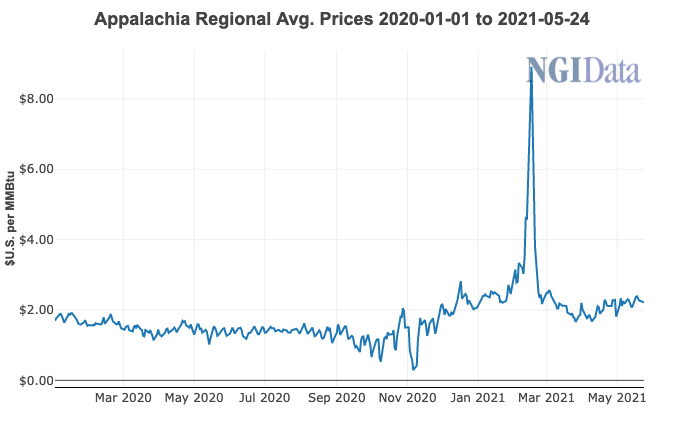 The report, based on data compiled by the Pennsylvania Department of Environmental Protection (DEP), showed “a clear acceleration” of production “after several quarters of moderate growth,” according to the IFO researchers.

Horizontal wells account for more than 99% of the state’s unconventional production.

There were 133 horizontal wells spud in the first three months of this year, down 13.1% y/y but up 34.3% from 4Q2020. This was the first quarter/quarter increase in spud wells since 1Q2020, “as drilling slowed notably in the spring of last year due to record-low prices and the Covid-19 pandemic,” researchers said.

Preliminary second quarter data showed that wells spud in April and May were up 9.9% from the similar 2020 period.

The uptick in activity has coincided with higher natural gas prices in the Appalachia region and the United States generally.

The growth “was largely driven by prices in the month of February, due to nationwide freezing temperatures, most notably in Texas,” researchers said.

Nationwide and regional gas prices, after falling precipitously from late 2018 to mid-2020, have “increased due to strong energy demand during the winter months, and the Texas freeze in February.”

“Decelerating growth in producing wells is due to less drilling activity and older wells being shut in or plugged,” the report’s authors said. “Without a significant uptick in new wells spud, producing well growth will likely continue to decelerate or stagnate.”

Washington and Bradford counties combined to account for nearly 93% of the statewide production increase, researchers said. The top producing county, Susquehanna, posted a 0.8% decline in total production, to 401 Bcf. Susquehanna and Washington counties each recorded a 7.1% increase in producing wells.

Of these highest gas producing states, Pennsylvania recorded the strongest y/y growth in gas output at 5.7%, according to the state. Pennsylvania also recorded its highest ever share of yearly nationwide production at 17.9%.

Additionally, Pennsylvania saw its highest month/month increase in drilling permit requests since 2018 during April, with requests totaling 130, up 57 from March, according to data from Evercore ISI.