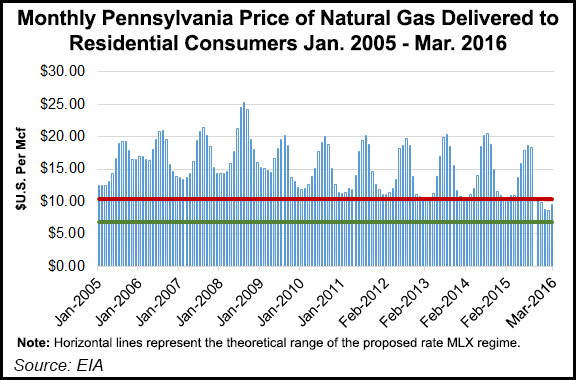 The PUC voted 4-0 to launch both investigations.

In March 2015, the PUC unanimously approved a five-year pilot program — officially, the Rider Service Expansion Tariff (SET) — which was designed to expand natural gas service to underserved areas of the state, but at a minimal cost to consumers (see Daily GPI, March 30, 2015). Under SET, Peoples and its affiliates charged customers a fixed monthly fee of $55, rather than requiring an upfront payment of thousands of dollars.

According to the PUC, Peoples told the commission that SET “led to confusion and resistance from customers,” adding that the company was “unable to enroll sufficient new natural gas customers in 2015 to initiate any new service expansion projects.” Despite that setback, the PUC approved three expansion projects between Peoples Natural Gas Co. LLC and Peoples TWP LLC in December 2015.

With SET foundering, the PUC said Peoples is now proposing a new, permanent program called Rate MLX. According to the company, MLX would replace the SET pilot program and eliminate the need for service expansion agreements, like the three approved last December, for future new projects.

“According to the request, MLX would be offered to residential and commercial customers wishing to convert from alternate, more costly fuels to natural gas,” the PUC said. “As proposed under MLX, Peoples would charge a customized delivery rate, in lieu of the standard tariff delivery rates, which would be unique to and applicable to all customers within each project area. Delivery rates for residential projects could be as low as $6.79/Mcf or as high as $10.32/Mcf.” MLX would also eliminate the need for a fixed monthly charge, such as the one imposed under SET.

The PUC suspended Peoples’ request for up to seven months and referred it to the PUC’s Office of Administrative Law Judge (OALJ). The commission said the OALJ will hold public hearings and make a recommended decision or settlement by Dec. 28.

In recent years, the PUC has approved similar pilot programs by PECO Energy Co., UGI and Columbia Gas of Pennsylvania to expand natural gas service in the state (see Daily GPI, Sept. 11, 2015; Feb. 26, 2014; July 10, 1998). According to the PUC, Peoples and its affiliates provide natural gas service to approximately 700,000 customers in western Pennsylvania.

The PUC suspended the utilities’ request for up to seven months and referred it to the OALJ for public hearings and a recommended decision or settlement by Jan. 27, 2017.