The impact fees paid by Pennsylvania’s unconventional natural gas producers in 2019 declined by 20% year/year to about $200.4 million, a drop that was primarily because of lower prices, according to the state Public Utility Commision (PUC). 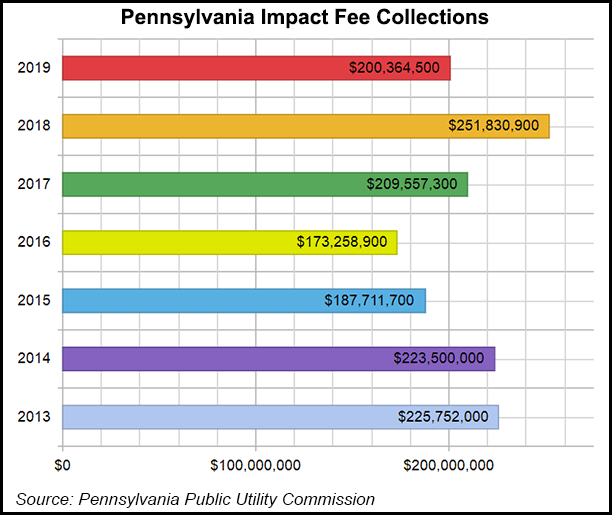 Since the fees were enacted in 2012, operators have paid nearly $2 billion to the PUC for distribution to local communities and state agencies.

Pennsylvania is the nation’s second largest gas-producing state behind Texas. Operators working in the Marcellus, Upper Devonian and Utica shales reported 6.8 Tcf of production last year, up 11.4% compared with 2018. However, the average price of gas declined from $3.09/MMBtu to $2.63 over the same time, which helped drive a $42.6 million annual decline in impact fee collections, regulators said.

The fee is levied annually on all unconventional wells during their first 15 years of operation, as long as they produce more than 90 Mcf. It is calculated using a multi-year schedule based on the average annual price of natural gas. The fee schedule, and the amount companies must pay for each well, depend on the number of years the wells have produced. Fees are highest for wells in their first operating year.

The PUC said county and municipal governments that are directly affected by natural gas development would receive more than $109 million for the 2019 reporting year, while $72.2 million would go toward the Marcellus Legacy Fund. The fund provides financial support for a variety of environmental, highway, water and other projects across the state. Another $18.4 million is to be distributed to state agencies. The PUC expects to distribute checks early next month.

The state’s leading oil and gas trade groups again touted the level of collections. Marcellus Shale Coalition President David Spigelmyer called the impact fee a “winning policy,” and along with other natural gas groups, took the moment to warn lawmakers and other officials against implementing additional taxes and regulations that would burden the industry.