The Pennsylvania Department of Environmental Protection (DEP) has completed its review of a 715-page air quality permit application submitted by Shell Chemical Appalachia LLC for a proposed multi-billion dollar ethane cracker, and the agency is one step closer to approving it, pending a public comment period. 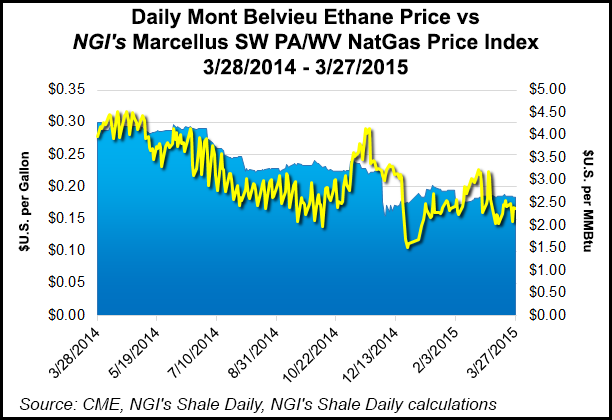 DEP spokesman John Poister said the agency has reached its “intent-to-issue” phase after months of poring over the permit application, which Shell filed last May (see Shale Daily, Aug. 5, 2014). A public hearing has been scheduled May 5 for the DEP to take formal testimony from Shell about the air quality plan and to allow the public a chance to comment.

Representatives from Shell will make presentations about the permit application and a question-and-answer session will allow the public to submit comments, statements or questions that DEP will consider before issuing the company a permit.

Poister couldn’t say when the state would issue an air quality permit, which is considered a key step in the federal and state regulatory process.

“It’s hard to say, it depends on the comments we receive and what we have to do,” Poister said when asked about a timeline. “There will be back and forth with Shell and some things about the application might have to be changed. You can’t pin a time frame on that.”

Shell first floated the idea of constructing an ethane cracker in western Pennsylvania in 2011 and signed a site option agreement in Beaver County in 2012 (see Shale Daily, March 16, 2012; June 7, 2011) It has signed three amended purchase agreements since then (seeShale Daily, Dec. 26, 2013). The company continues to assess the cracker’s economic viability and has made no final decision.

The cracker would be constructed on a 400-acre site adjacent to the Ohio River in Potter and Center townships in Beaver County, about 35 miles northwest of Pittsburgh, near a liquids-rich window of the Marcellus Shale. The complex would convert locally sourced ethane into ethylene and polyethylene, which is a key building block for plastics. According to Shell’s air permit application, the facility would be capable of producing 1.5 million metric tons of ethylene per year and another 1.6 million metric tons of polyethylene per year.

Shell is awaiting other federal permits for the site and more from the DEP as well. Poister said the agency still has to approve a pollution discharge permit authorizing the facility to dump processed waste into the river, a building permit and a waterways permit for the construction of a dock at the site. Depending on the amount of public comments, the agency could also have to hold another public hearing about the air permit application, he added.

Windon said the current commodity price environment was not specifically influencing Shell’s decision about the facility, saying only that “this proposed project must compete against other future investment opportunities Shell has within its global portfolio of options.”

According to the company, if the cracker is constructed, it would be the first project of its kind to be built outside the Gulf Coast in more than 20 years. Three other crackers have been proposed in the Appalachian Basin, but interest in Shell’s plans has been high since it became the first to announce a potential project for the region (see Shale Daily, May 2, 2014; Nov. 14, 2013; Jan. 19, 2012).