The Pennsylvania Department of Transportation (PennDot) has awarded a 20-year, $84.5 million contract to Trillium CNG and two other companies that would significantly expand the use of compressed natural gas (CNG) for both public transit agencies and the public. 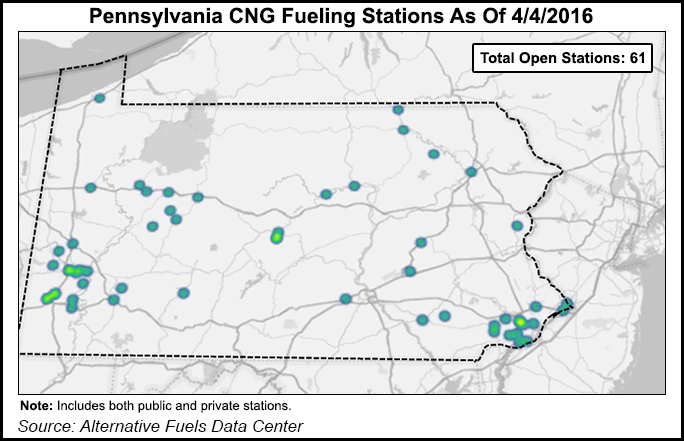 Under the agreement, Trillium is to design, build, operate and maintain 29 CNG fueling stations at public transit agencies across the state. Pennsylvania-based firms Larson Design Group and American Natural of Pittsburgh would assist the company in designing and commercializing the sites. Construction on the facilities is expected to begin this fall and be complete by spring 2021.

The state’s Public-Private Partnership Board approved plans for the fueling stations in September 2014. PennDot announced the contract on March 28, saying it would leverage the abundance of natural gas that’s being produced in the state.

Seven of the 29 stations would be available to the public. While construction of the facilities takes place over the next five years, Trillium would also make upgrades to existing CNG fueling sites in the state. In all, the sites would supply gas to more than 1,600 CNG buses at participating agencies.

Calling the PennDot project “expansive,” Love’s General Manager of Natural Gas Bill Cashmareck said the “agreement affirms Love’s continued commitment to the CNG Industry,” adding that “Pennsylvania is one of the largest producers of natural gas, and this project will help sustain one of the state’s most valuable industries.”

Trillium already provides CNG to thousands of natural gas vehicles that run for transit authorities, school districts, airport fleets and the public. It delivers more than 55 million gallons of CNG annually. PennDot cited the company’s background in awarding it the contract.

CNG prices were averaging about $2.11/gallon nationwide on Friday, according to cngnow.com, while the automotive group AAA showed that the average national price for a gallon of diesel fuel was $2.82. Based on current CNG, diesel and gasoline prices, as well as fuel usage, PennDot said the new stations would save transit agencies in the state more than $10 million per year. The agency would receive a 15% royalty, excluding taxes, for each gallon of CNG sold to the public.

Trillium has guaranteed at least $2.1 million in royalties over the term of the agreement, which would help PennDot support the cost of the project. The stations would also eliminate about 20 million pounds of carbon dioxide emissions per year once all the buses are put into service, PennDot said.

Pennsylvania has about 61 CNG fueling stations, 35 of which are open to the public, according to the Alternative Fuels Data Center.