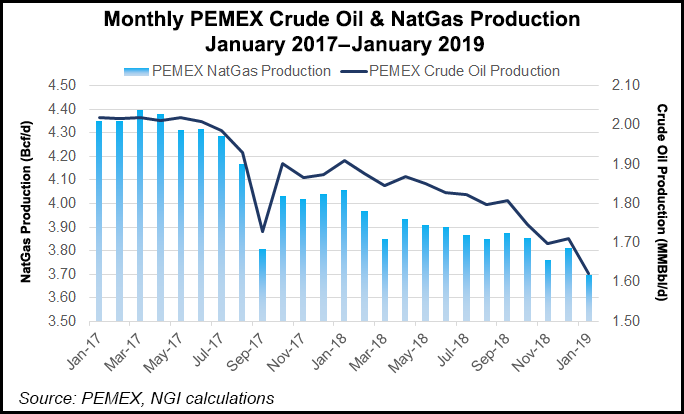 However, many analysts suggest increasing gas production will be difficult given productivity and cash flow restraints at the state company — despite an increased 2019 budget and the financial bailout package announced by the new government earlier this month.

Pemex’s tax burden is significantly above other state oil companies, and is even slightly higher than the figure at Venezuela’s besieged PetrÃ³leos de Venezuela SA (PDVSA). Nearly all (95%) of Pemex pre-tax earnings over the past two decades have gone to the Mexican government.

Productivity at Pemex is also significantly lower than at other state oil firms. Pemex oil output per employee is about 15,000 b/d, according to Glossop, compared to 35,000-40,000 b/d per worker at Russia’s state-owned OAO Rosneft and Brazil’s Petroleo Brasileiro SA (Petrobras), and 80,000 b/d per worker at Colombia’s Ecopetrol SA and Norway’s Equinor ASA.

New restrictions on private participation in the upstream sector will also limit production. Last week, LÃ³pez Obrador said he is halting all new joint ventures (JV) with Pemex, following a decision in December that the government would stop new oil and gas auctions for at least three years. This could mean, for example, that Pemex would not be able to count on the experience of a private sector partner to explore the gas-rich Ixachi field.

“Halting oil auctions will severely limit any increase in private oil production over the coming five-to-10 years,” Glossop said. “It could also have a knock-on impact on Pemex. Any profit-share arrangements that would’ve taken place will no longer happen, which will further exacerbate its financial troubles.”

Mexico’s gross domestic product, or GDP, expanded by 0.2% in 4Q2018 compared to the previous quarter, slightly lower than initial projections of 0.3%, according to the official statistics agency.

GDP grew by 1.8% in 4Q2018 compared with the same quarter in 2017. Full year growth was 2.0%. The GDP figures are the first to be released since LÃ³pez Obrador took office in early December.