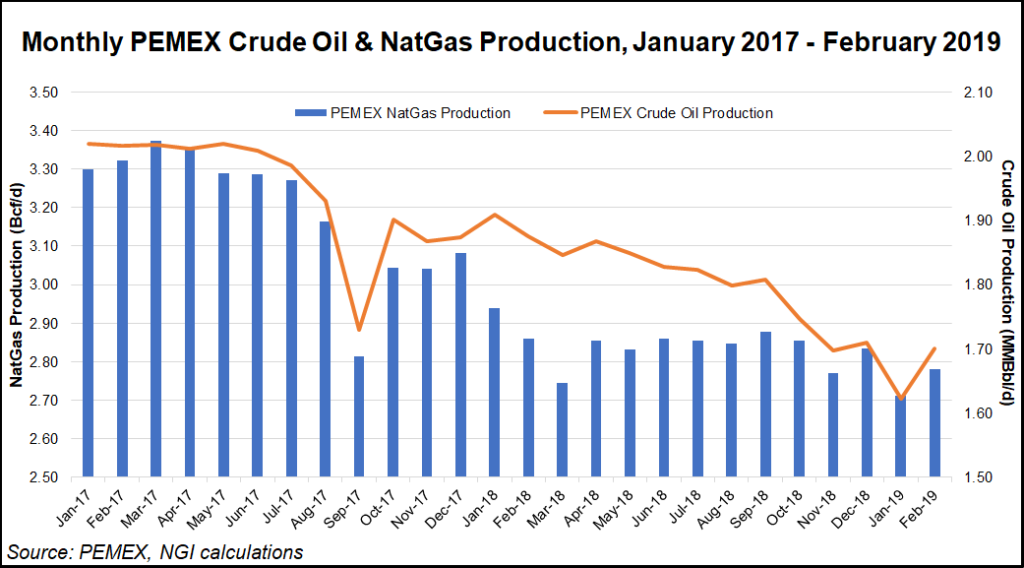 Crude oil output rose to 1.707 million b/d from 1.623 million b/d, according to figures published Monday by the state-owned company.

Associated gas extracted from oil wells accounted for 73.9% of the natural gas total, up from 72.1% a year ago.

The new fields include the gas-rich Ixachi onshore field in Veracruz state. Pemex expects Ixachi to supply about 700 MMcf/d of gas and 80,000 b/d of condensate by 2022.

“In the medium-term, I believe that the strategy of Pemex and the federal government should be to put emphasis on Ixachi,” Talanza Energy Consulting’s David Rosales, midstream and downstream partner, told NGI’s Mexico GPI.

Rosales said Ixachi is expected to begin supplying gas to the Sistrangas national pipeline grid this year, which would help compensate for output declines at mature Pemex fields.

The February figures follow deputy finance minister Arturo Herrera’s announcement last week that the government plans to tap the rainy day fund known as the fondo de estabilizaciÃ³n de ingresos presupuestarios (FEIP) for up to $7 billion to help Pemex pay down its immense debt load, widely cited as the largest among the world’s upstream majors.

Pemex’s financial debt stood at $106 billion at the end of 2018, up 2.2% year/year, according to the the fourth quarter earnings report.

The finance ministry is expected to announce further details on the plan to dip into the emergency fund in the coming weeks, Herrera reportedly said.

The FEIP plan is in addition to a 107 billion peso ($5.5 billion) “rescue” package for Pemex announced in February by President AndrÃ©s Manuel LÃ³pez Obrador after a two-notch downgrade of the oil giant’s debt to one level above junk by Fitch Ratings in January.

Romero has said the government’s rescue measures, combined with an increased upstream budget, would allow Pemex oil production to reach 2.6 million b/d by the end of 2024, and for natural gas output to rise by 50% from December 2018 levels over the same span. LÃ³pez Obrador’s suspension of upstream bid rounds, which resulted in the awarding of 103 exploration and production contracts to firms from around the world between 2015 and 2018, has placed additional pressure on Pemex to drive production growth.

Pemex February natural gas production was down 42% from a peak of 6.516 Bcf/d reached in 2009. Rising demand over the same span, driven mainly by the power generation and industrial segments, has made Mexico increasingly dependent on gas imports from the United States.