Despite significant production gains from each of its core areas in the Denver-Julesburg (DJ) and Permian basins, including an increasingly oilier profile, PDC Energy Inc. continued to wrestle with midstream constraints in the Wattenberg Field of northeast Colorado during the third quarter. 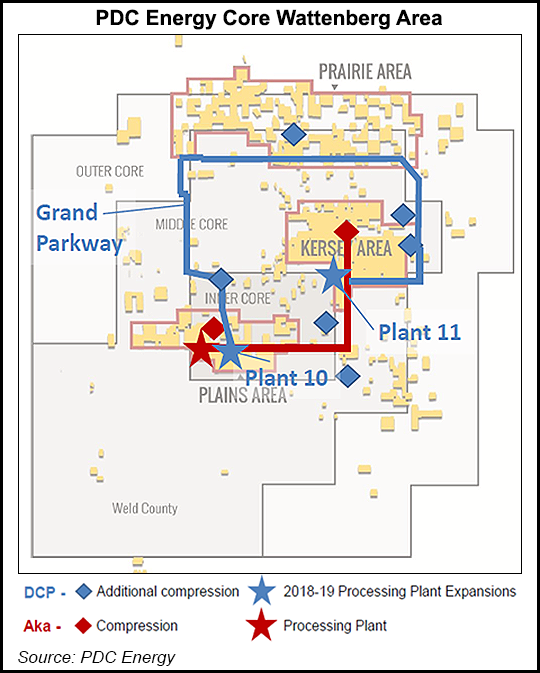 “Our Wattenberg operating performance is beginning to improve, as production and costs are both trending in the right direction,” said CEO Bart Brookman. “However, our production continues to be curtailed by the shortfall in midstream capacity in the basin.”

As production has ramped in the DJ, the company’s primary midstream provider, DCP Midstream LLC, has increased its processing capacity, which resulted in modest improvements to line pressures. But PDC said the ongoing system optimization, coupled with unplanned facility downtime, continued to limit production from the company’s Wattenberg properties in Weld County, which total 100,000 net acres and make up its largest asset.

Despite the challenges, Wattenberg production was still up 7% sequentially to 84,000 boe/d in the third quarter. It also was easily the company’s most active area, where 43 wells were spud and another 22 were turned-in-line.

In the Permian’s Delaware sub-basin, where the company holds 55,000 net acres after a $1.5 billion deal to enter the play two years ago, management said PDC continues to see improvements in drill times, completion designs and production results. The company spud eight wells in West Texas during the quarter and turned-in-line another 10 wells.

The Wattenberg midstream constraints, however, prompted PDC to cut its full-year production forecast to 40 million boe, the low end of its 40-42 million boe guidance for 2018. Operating expenses also are expected to be slightly higher given some of the midstream issues the company has faced. Management added that the constraints are not expected to impact its 2019 outlook, which has the company growing year/year production by up to 35%.

Brookman said capital expenditures for next year are likely to be set at $1 billion to reach that growth rate, which would be just above the $950-985 million budgeted for this year.

“While we are just beginning the budgeting process, we anticipate fairly balanced operational and capital allocation between the Delaware Basin and the Wattenberg Field,” Brookman said during an earnings call with financial analysts.

PDC also is targeting free cash flow levels somewhere in the range of $100-200 million. That goal could get a boost from the potential monetization of the company’s Delaware midstream assets. Management is expected to have a decision by 1Q2019 on whether to keep or sell those assets, which include gathering and water lines, among other things.

The wide year/year difference was primarily attributable to the $97.5 million difference in total revenues between periods and impairments recorded in 3Q2017 of both unproved properties and goodwill totaling $327.9 million.

Management, who shared concerns ahead of the midterm elections about a potentially devastating ballot initiative in Colorado that would have limited oil and gas drilling in the state, also likely breathed a collective sigh of relief.

Voters soundly defeated Proposition 112, with nearly 60% of votes cast against the measure, which would have increased well site setbacks to 2,500 feet from 500 feet for residences and workplaces, as well as “vulnerable areas” such as playgrounds and public water sources.