North American contract driller Patterson-UTI Energy Inc. has agreed to buy out financially troubled Seventy Seven Energy Inc. in an all-stock deal valued at $1.76 billion that would expand its fracturing business and its onshore leverage. 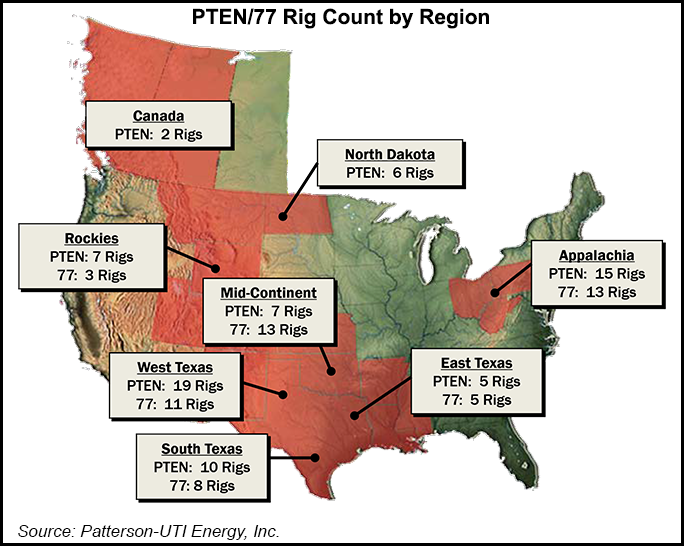 The transaction would solidify the Houston-based oilfield services operator as a U.S. land drilling leader with 201 high-specification rigs and one of the largest pressure pumping fleets in the industry, with more than 1.5 million hydraulic hp (hhp) across the United States and into Canada.

Oklahoma City-based Seventy Seven, which filed for Chapter 11 bankruptcy protection in June, was spun off from Chesapeake Energy Corp. in mid-2014 — but it never got its footing following the plunge in oil prices and resulting reduction in onshore work.

Seventy Seven is in a “distressed situation and yes, it is working through bankruptcy, but not on the quality of its assets,” PTEN CEO Andy Hendricks said during a conference call Tuesday.

Chairman Mark S. Siegel said Seventy Seven was “always held in high regard” because of its”commitment to quality service in the field, their high-quality assets and facilities, and the talent they have throughout their organization. As Seventy Seven Energy emerged from its recent financial restructuring, we saw an opportunity to engage a partner that is a great strategic fit for Patterson-UTI.”

PTEN now has 161 Apex rigs, its top-of-the-line high specification equipment, with more than 1 million hhp concentrated in Texas and the Appalachian Basin. Seventy Seven, with about 500,000 hhp, owns a fleet of 40 high-spec drilling rigs, 93% of which are pad capable, including 28 of its trademark fit-for purpose PeakeRigs and 51 silicon-controlled rectifier rigs.

“We are very excited to be joining forces with Seventy Seven Energy,” Hendricks said. “Their contributions will allow us to further capitalize on the shifting industry fundamentals in the U.S. oil and gas market, where customers are increasingly focused on efficiency and high-quality execution. This merger provides both strong personnel and high quality equipment that are complementary to our existing service offerings.”

PTEN expects to achieve synergies of more than $50 million, as many of the assets would complement onshore developments. The merger, unanimously approved by the boards of both companies, is expected to be completed by the end of March, pending regulatory approvals. PTEN also entered into a voting agreement with three of Seventy Seven’s major shareholders — BlueMountain Capital Management, Axar Capital Management and Mudrick Capital Management — which combined represent more than 50% of the outstanding shares of common stock.

“The merger combines two strategically aligned companies into one company that will be financially well-positioned and a leader in U.S. land,” said Seventy Seven CEO Jerry Winchester, who has run the business since it was formed in 2011. “Given the changes our company and industry have been through the past two years, this merger is the right decision for our shareholders, employees and the oilfield services industry as a whole.

“This transaction will establish a company with tremendous scale, a diversified customer base and premier assets located in the most active basins in the U.S. In closing, Patterson-UTI shares our commitment to service quality and safety, and we are excited to align ourselves with them in the coming months.”

Under terms of the merger, PTEN agreed to provide 49.6 million shares for all of Seventy Seven’s stock, giving Seventy Seven shareholders about 25% of the combined company. All of Seventy Seven’s debt would be repaid in the deal through a combination of cash on hand, an undrawn credit facility and a financing commitment of $150 million.

PTEN has the financial resources to repay all of the debt, but it plans to issue equity to maintain its “historically conservative capital structure,” Siegel said.

The merger “illustrates the increasing importance of scale within the U.S. oil service industry,” Tudor, Pickering, Holt & Co. analysts said. “We understand the logic of this merger, but we still find this combination a bit surprising as we view standalone PTEN as already well positioned in both its contract drilling and pressure pumping segments.”

“This part of the merger makes sense to us as it enables PTEN to build on its existing scale in the Eagle Ford and enter the Anadarko Basin,” home to Oklahoma’s myriad stacked reservoirs, analysts said.