West Texas aficionado Parsley Energy Inc. struck for a second time in the Permian Basin in as many months, agreeing Tuesday to pay $2.8 billion for another 71,000 net acres, giving it command of 277,000 net acres total, mostly in the Midland sub-basin. 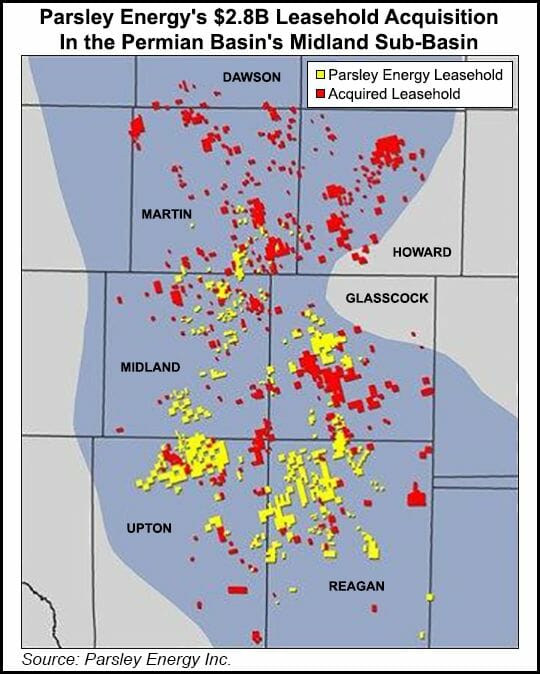 The leasehold is being acquired from Double Eagle Energy Permian LLC, which was producing 2,600 boe/d from the acreage in the Midland formation at the start of the year. The newest deal follows a string of acquisitions worth close to $1.3 billion struck since last May.

Last month Parsley agreed to pay $607 million for 23,000 net acres in the Midland and Delaware sub-basins of West Texas. In August it spent $400 million to bolt-on Midland acreage, and last spring it paid almost $290 million for mineral rights and acreage in the Delaware.

“This transaction maintains our focus on core of the core acreage with the most favorable reservoir characteristics and positions us for years of production growth at the low end of the cost curve,” CEO Bryan Sheffield said. “The infusion of high quality drilling locations substantially increases our peak production potential and extends our inventory of drilling locations while enhancing the quality of that inventory.

“We believe this transaction sets us apart from peer companies on the basis of the size and quality of our acreage position in what we consider the most desirable basin in the country.”

The transaction comes at a hefty price.

Wells Fargo Securities analyst David Tameron estimated Parsley paid about $37,400/acre net for the Midland leasehold, or about $805,000/per drilling location. Tudor, Pickering, Holt & Co. said the price tag worked out to around $36,000/acre. Williams Capital Group LP’s Gabriele Sorbara calculated the valuation “at $37,300/undeveloped acre, which is at the higher-end of recent transactions in the Midland Basin executed in the $20,000-45,000/acre range.”

Parsley would gain not only producing acreage with operating control on 80% of the net drilling locations but 23 drilled uncompleted wells that target the Spraberry and Wolfcamp targets. Average lateral lengths of the wells are 8,400 feet.

In total, there are about 3,300 net horizontal drilling locations, including 1,800 in the Spraberry and Wolfcamp, with average laterals of 6,600 feet. More than 40% of the locations have lateral lengths averaging 7,500 or more.

Parsley is running 10 rigs today across its Permian acreage. With the Double Eagle purchase, it plans to be running 14 rigs by year’s end. The additional drilling should translate to about “40 incremental horizontal well spuds in 2017, approximately 10 of which are expected to be put on production this year,” management said. All of the incremental wells would be in the Midland sub-basin, with most of the production impact associated with incremental drilling and completion activity occurring in 2018.

There has been no let up in acquisition activity across the Permian Basin, and it has in fact quickened as prices have risen over the past few months. The biggest deal to date this year was ExxonMobil Corp.’s $6.6 billion transaction in the Permian’s Delaware sub-basin. Noble Energy Inc. also in January agreed to pay $2.7 billion for Permian-focused Clayton Williams Energy Inc. to expand its position in the West Texas portion of the Delaware. Many small deals also have been done. For example, Diamondback Energy Inc.’s Viper Energy Partners LP completed 26 Permian transactions in the second half of 2016.

Double Eagle, formed only four months ago through a merger between private-equity backed Double Eagle Lone Star LLC and Veritas Energy Partners Holdings LLC, agreed to assist with asset operation and hand-off, as well as acreage trades and purchases after closing. The Fort Worth, TX-based producer is helmed by co-CEOs Cody Campbell and John Sellers.

“With many possible paths for the next phase in the evolution and development of Double Eagle’s assets, we were excited to negotiate a transaction with Parsley given the company’s history of efficient growth and of enhancing the value of its asset base through the same types of creative transactions it took to build Double Eagle’s portfolio,” Campbell and Sellers said jointly.

Apollo Global Management’s Greg Beard, who heads natural resources, said on behalf of Apollo and Double Eagle’s other financial sponsors, Post Oak Energy Capital and Magnetar Capital, they planned to work with Parsley as it “develops the prized assets the Double Eagle team has expertly assembled in the true core of the Midland Basin. We believe Parsley’s record of strong operational performance and the company’s complementary asset base make Parsley the ideal company to deliver the tremendous value associated with these assets.”

In the transaction, scheduled to be completed by April 20, Double Eagle is to receive $1.4 billion cash and about 39.4 million shares of Parsley Energy LLC, together with a corresponding number of shares of common stock, valued at around $1.4 billion. The cash portion would be financed through equity and debt offerings, Parsley said.

Once completed, Parsley estimated the deal would give it 179,000 net acres alone in the Midland, which it said would be the second largest position among publicly traded exploration companies.There is “sufficient acreage footprint to support more than 20 rigs focused on horizontal development,” management said.

Parsley, which is scheduled to issue its quarterly and full-year results on Feb. 23, also updated its 4Q2016 projections. Production for the final three months of 2016 is expected to be 44,800-45,200 boe/d net, up about 5% sequentially at the midpoint. Capital expenditures in the final period were around $155-160 million.