West Texas explorer Parsley Energy Inc. joined a growing chorus of Permian Basin operators in announcing it will reduce development activity in 2019 because of a “less favorable commodity price environment.” 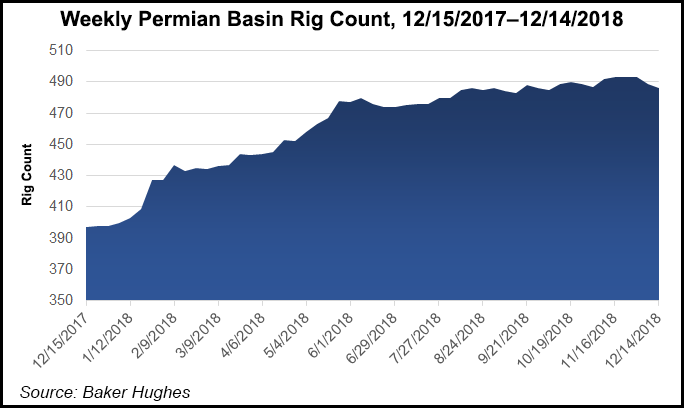 The Austin, TX-based independent late Wednesday said it plans to deploy on average 12-14 rigs and three-four fracture spreads in 2019, down from a recent run rate of 16 rigs and five spreads.

“The proposed development program is consistent with our strategic framework oriented to discipline, foresight and stability,” President Matt Gallagher said. “Despite a less favorable commodity price environment, we still intend to take a significant step toward free cash flow generation in 2019. In fact, we are committed to a material reduction in operational outspend no matter the commodity price environment.”

The baseline capital budget for 2019 is assuming a $50/bbl West Texas Intermediate oil price and relatively “static” oilfield service costs. Parsley expects to outspend cash flow from operations by less than $250 million, representing a year/year decline of more than 50%.

Even in a lower oil price scenario, Parsley expects to target a “maximum outspend” of $250 million, which it would accomplish by incremental activity reductions, likely in combination with lower service and equipment costs, Gallagher said.

In a higher oil price scenario, Parsley still plans to “remain disciplined and would not plan to increase equipment levels in 2019 compared to those associated with the baseline budget.

“In the event of incremental and sustained oil price weakness, we have the operational flexibility to slow activity further even as our hedge book protects a portion of our cash flow; if oil prices rise, our timeline to self-funded growth would shorten.”